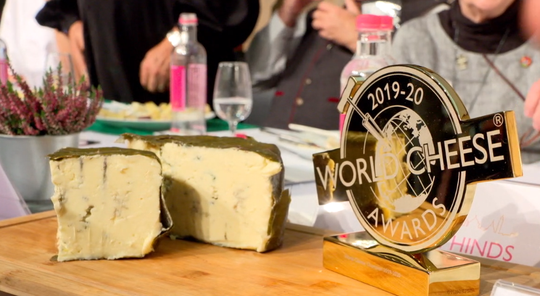 CENTRAL POINT, Ore. – ​​Rogue Creamery’s Rogue River Blue Cheese has been named World’s Best Cheese at the 2019 World Cheese Awards in Bergamo, Italy. Expert judges from around the globe tasted 3,800 of the world’s most distinguished cheeses to choose Rogue River Blue as the World Champion. This is the first time an American-made cheese has received this top honor.

Rogue River Blue Cheese is made by Rogue Creamery, a small, artisan cheesemaker in Southern Oregon that has been in business since 1933. It is an organic, cave-aged blue cheese that is wrapped in Syrah grape leaves that are soaked in pear spirits.

“I am humbled and filled with gratitude. This is the greatest distinction a cheese can receive,” commented Rogue Creamery President, David Gremmels. “What extraordinary validation of our commitment to quality, of the place that inspires our cheese – Southern Oregon’s Rogue Valley – and of the excellence of the growing American artisan cheese industry.”

Rogue River Blue is made exclusively with milk from Rogue Creamery’s Certified Organic Dairy Farm, where cows graze on pastures bordering the Rogue River. A seasonal product, Rogue River Blue is only made in the fall, beginning on the autumnal equinox, when cooler temperatures bring renewed growth to the pastures and the cow’s milk becomes richer and higher in butterfat. Gremmels considers this to be the best milk for expressing the unique attributes of their region.

First created in 2002, Rogue River Blue wowed the cheese world by winning Best Blue Cheese and Reserve Champion at the 2003 World Cheese Awards – cementing it as one of the United States’ most celebrated cheeses in a growing artisan and farmstead cheese market. 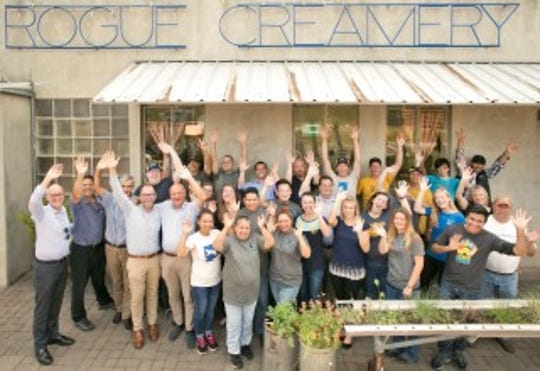 “This is the product that put American Cheese on the map,” continued Gremmels. “As a result of that 2003 award, we pursued the first American raw milk cheese Health Certificate for export. We are grateful for our customers and the support of legislators and sponsors like USDEC who have helped bring this product to fine cheese shops and restaurants in Europe, the U.K., Australia and beyond.

"It's a sensational cheese," he said. "It was quite unlike anything we've had."

Hosted by the Great Taste Awards, the 32nd annual World Cheese Awards gathered more than 3,800 cheeses from 42 countries on six continents for tasting by a panel of 260 expert jurors. Receiving 100 points at this year’s judging, Rogue River Blue tied for top honors with an Italian Parmigiano-Reggiano. A tie-breaking vote crowned Rogue River Blue as the 2019 World Champion.

Colleen Kottke of the Wisconsin State Farmer contributed to this report.