Consumers want and expect wholesome food and there are global concerns about antimicrobial resistance.

Must be done with strict protocols 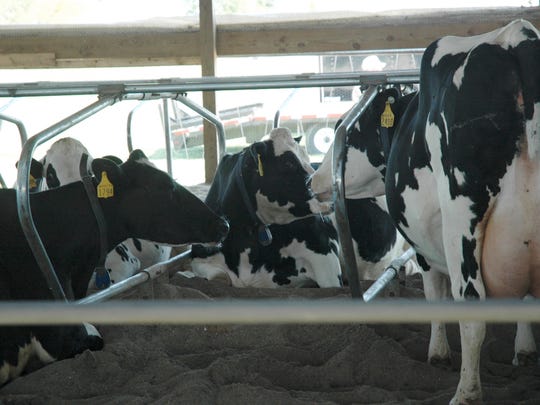 DANE - As concern among human health officials grows regarding antibiotic resistance, the dairy industry is responding with research into methods producers can use to reduce their overall use of antibiotics.

Dr. Gary D. Neubauer, a former dairy practitioner on large dairy farms in New Ulm, Minnesota and past president of the National Mastitis Council spoke last week to a group of dairy farmers in Dane about the use of this practice — treating some cows with antibiotics and not others rather than the practice of blanketing all with the same treatment. He noted that stringent protocols must be followed to make a success of this practice.

“Some people call it selective dry cow therapy. I’d rather call it precision dry cow therapy,” said the retired vet. After practicing veterinary medicine he went on to work for Pfizer Animal Health and then Zoetis.

He noted that there is increasing pressure on the livestock industry to demonstrate good drug stewardship because of “anti-microbial” resistance issues. The European Union has mandated an overall lowering of farmers’ use of antimicrobials and in this country that type of regulation has taken the form (so far) of the “Veterinary Feed Directive” which requires farmers to contact their veterinarian of record when they want to treat a group of young animals, for example, with a treated feed for pneumonia.

According to Neubauer, the federal Food and Drug Administration has stated that it has a five-year plan to phase out the over-the-counter purchase of antibiotics, meaning farmers would have to go to their vet clinic to purchase these products on a prescription rather than picking them up at the farm store.

“Consumers want and expect wholesome food and there are global concerns about antimicrobial resistance,” he said. But he’s irked when people make comments about organic products being the only milk in the store that’s free of antibiotics. “All the milk in the store is antibiotic free.”

Of all the antibiotics used in the world, it’s true that 80 percent of them are used in animals, but he noted that a great many of them are not of any importance when it comes to human health. Things like coccidiostats are used in cattle and are considered to be an antimicrobial, but cannot affect human health because those types of things are not ever used on people.

Neubauer pointed out that pound for pound, humans and their pets use 10 times the amount of antibiotics than what is used on livestock. “It’s a misconception that animal antibiotic use is a contributor to resistance in humans. The Centers for Disease Control has said that most human antibiotic-resistant infections are acquired in a hospital setting.”

He stressed that the so-called growth-promotant antibiotics, used in livestock are never used on the human medicine side. However, that doesn’t mean that livestock producers can’t do better on their use of antibiotics. He is on a panel in Minnesota that includes human health administration officials, veterinarians and medical doctors to look at the many issues involved in antibiotic resistance.

This task force is called Minnesota One Health Antibiotic Stewardship Collaborative and includes environmentalists because it turns out that one of the pathways to antibiotic resistance is the drugs that people flush down their toilets that then get into drinking water.

Farmers should take the opportunity at some point in the year to meet with their veterinarian to look at their antibiotic use and determine if there are ways to use less. One of those ways might be to reduce dry cow treatments — the treatment of every cow as she is dried off.

Neubauer said that research is showing that mastitis isolates taken from cows and cultured in a lab do not show antibiotic resistance. But he cautioned repeatedly that farmers can only selectively treat cows if certain protocols are met.

First, overall bulk tank somatic cell counts must be low. He outlined a study that had been done on selective dry cow therapy on 628 herds in Florida, Michigan and Pennsylvania. Their average bulk tank cell counts were 194,000 cells per milliliter and all had been using blanket dry cow therapy along with a teat sealant product as dry off.

In this study and in another from Germany that he cited, the blanket dry cow treatment had the best results. “The take-home message from both of these studies is that everyone should be using an internal teat sealant. Even in the best-managed, sand-bedded herds those cows treated with Orbeseal still showed an improvement,” he said.

Another study, in the Netherlands, looked at results in 97 herds with 1,657 cows that used a “split udder” design, meaning some of the teats on each cow were treated in different ways. In that study, cows that didn’t get dry cow treatments were more likely to get clinical mastitis and higher cells counts in their subsequent lactations.

Of all the studies he cited, the only one that made precision dry cow treatment work successfully was one in Canada. There were 16 herds with a total of 729 cows (median herd size was 75 cows) and what differed in that experiment was that every cow was cultured to determine which of them were selectively treated.

Echoing that, a University of Minnesota study cultured cows two days before dry off with a cow-side culture test called 4 Sight ™. In that study the quarters with bacterial growth got antibiotic treatments.

“You need a sensitive diagnostic test to make cow- or quarter-level decisions,” he said. And farmers need to use the internal teat sealant. “It’s in the no-brainer category but it’s got to be done properly.”

The farm also needs accurate cell count data because such a program needs information on new infections and clinical mastitis. The idea of dry cow treatments is to maximize the cure and minimize new infections and there needs to be good test data for that, he said.

In 2018, the average somatic cell count on U.S. dairies was 181,000. “What processors used to define as ‘high quality’ has slowly evolved into ‘average quality’ milk,” he said. Neubauer said that research has shown that cows with lower cell counts produce incrementally more milk.

Dr. Bob Steiner, a practitioner with Lodi Veterinary Care, the group that invited Neubauer to speak to the practice’s southern Wisconsin dairy clients, said that the somatic cell counts in a dairy herd can be a barometer of so many things in the herd.

Studies have shown that days open and culling rates increase in cows with higher SCC, and reproductive efficiencies are lost. He said the cost of a clinical mastitis case is $444 — with $128 in direct costs and $316 in indirect costs.

Culturing, looking at the cell count history of cows, using teat sealants and a core antigen vaccine are all steps to getting better results, Steiner said. In addition, it’s important for transition cows that they get good management. Today, there is also genetic testing that can help farmers identify which cows are genetically predisposed to mastitis.

Neubauer and Steiner agreed that one idea dairy producers might want to implement is to have a regular “herd health” check for mastitis and milk quality as they do for reproductive checks on the herd.