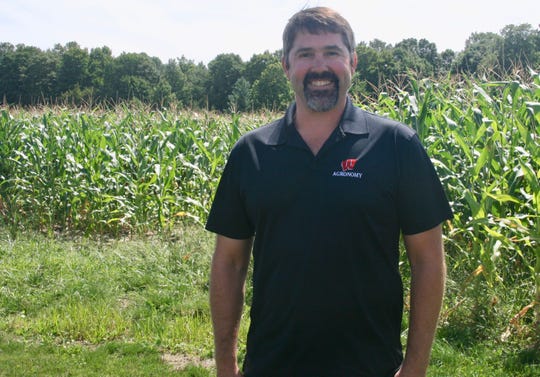 EDGAR, Wis. – The U.S. is a major soybean producing country that supplies 34 percent of global annual soybean production, according to Dr. Shawn Conley.

The professor of agronomy and the state soybean and small grains specialist at the University of Wisconsin–Madison added that the crop has become increasingly important to Wisconsin farmers who grow soybeans as a cash crop and as feed for their cattle.

Conley is known as one of the nation’s preeminent soybean researchers. His research goal is to generate science-based solutions to real-world problems in soybean and small grain production. His findings are delivered to growers through various Extension programs, published articles and at numerous events and meetings.

Conley was the featured speaker at the recent crop tour in Marathon County sponsored by Swiderski Equipment and various industry partners. He spoke to the nearly 100 attendees during the lunch break between the morning and afternoon field presentations.

Covering a wide range of issues related to soybean production, he noted that most U.S. soybean-producing regions are dependent on rain, and thus are highly vulnerable to extreme weather events.

“A major challenge to increasing crop yields to meet future demand can be achieved by improved genetic traits and crop management strategies that can help mitigate the projected negative impacts of weather on crop yields,” he said.

“An important step towards adapting to weather changes and mitigating their impact on yield is accurate identification of the weather conditions that most affect crop yield. Across the U.S., planting 12 days earlier than what was practiced during 2007– 2016 would have resulted in a 10 percent greater total yield.,” Conley added.

“This leads to earlier node accrual and floral induction which can optimize the final number of main stem nodes and result in greater yield potential,” Conley reported.

However, earlier planting may be associated with an additional cost for farmers to update or add additional planting equipment. An important consideration in early planting is spring frost occurrence, which can damage or destroy the crop (but only after emergence at 15–25 DAP (Days after planting).

In Nebraska, Illinois, and Wisconsin, producers appear to be already using near optimum planting dates, according to Conley.

“Plant soybeans as early as possible after April 25 as soil conditions permit; if possible, complete planting by May 20,” he advised. “If the soil is fit, soil temps are near 50 ˚F, and the forecast is favorable… get that soybean planter rolling!”

Conley said early May planting in Wisconsin has been documented to increase yield due to increased light interception in two ways.

“First, the reproductive growth period between R1-R6 occurs during longer days with the May 1st (Green line) compared to June 1st (Orange line) planting date. Secondly, the time spent in the R1-R6 growth stages is increased with the earlier planting date.”

As planting is delayed, the earlier MG (maturity group) bean’s do not show a quick and dramatic yield decline compared to the later maturing beans.

“Growers who may have not experienced yield loss from delayed planting are likely planting varieties from a MG too short for their respective area. But the synergy of early planting and longer MG’s, may not be as consistent in Northern Wisconsin where the growing season is condensed,” Conley said.

These results suggest planting a portion of your acres to slightly longer MG than normal within May which can result in greater yields with no additional dollars spent.

The value of the soybean crop has long been based on the seeds relatively high protein and oil content.

“Our test results highlight the potential yield and monetary benefit that U.S. farmers can gain due to planting date adjustment by using the results we report as a point of reference of optimal planting date in each state,” he added.

In summary, Conley said, “Early planting is critical for higher yields through increased light interception, and can be further maximized by planting longer MG’s. However, variety selection heavily based upon the MG is not the “silver bullet” for increasing yields.

"Yet, it does provide a strong “potential” for higher yields with no additional dollars spent, especially in early planting situations. Growers should give consideration to MG when selecting varieties, but past local and regional performance, disease resistance should also strongly be considered," he concluded.