Japanese officials cautious on prospects for US trade deal

Japan ag minister cautioned against letting down Tokyo's guard until the final agreement is reached.

Japanese officials cautious on prospects for US trade deal 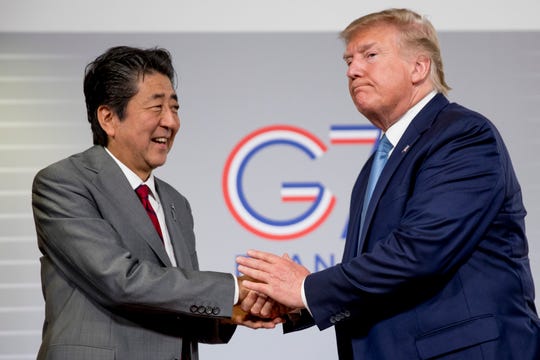 U.S President Donald Trump and Japanese Prime Minister Shinzo Abe shake hands following a news conference at the G-7 summit in Biarritz, France to announce that the U.S. and Japan have agreed in principle on a new trade agreement. On Tuesday, Sept. 17, 2019, officials in Japan appear wary over the prospects for a trade deal with the U.S. after President Donald Trump said he was prepared to sign a pact soon. (Photo: Andrew Harnik, AP)

TOKYO (AP) – Officials in Japan appeared wary over the prospects for a trade deal with the U.S. after President Donald Trump said he was prepared to sign a pact soon.

Suga said Trump and Prime Minister Shinzo Abe are considering signing a deal in late September when they attend the U.N. General Assembly in New York.

"We are accelerating the work that still remains," he said. "But I decline to comment further because we have not reached a formal agreement."

Trump's notice to Congress, released by the White House on Monday, did not mention tariffs on autos and parts, long a sticking point between the two countries.

It said his administration was looking forward to collaborating with lawmakers on a deal that would result in "more fair and reciprocal trade" between the two countries.

The agricultural minister, Taku Eto, cautioned against letting down Tokyo's guard until the final agreement is reached, it said.

Japan and the other 10 remaining members of the trade pact, the Trans-Pacific Partnership, then renegotiated their own deal without the U.S.

Trump said he preferred that Washington and Tokyo strike a bilateral deal. That resurrected the longtime issue of tariffs on Japanese car and auto parts exports to the U.S. and of stiffer duties on U.S. exports of farm and other products to Japan.