7 year old Jersey is Wisconsin Cow of the Year

Milk-n-More Tequila Naomi, bred and owned by Milk-n-More Farms , will be recognized at a special ceremony on Oct. 2 during World Dairy Expo.

7 year old Jersey is Wisconsin Cow of the Year 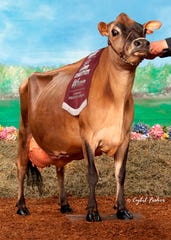 Milk-n-More Tequila Naomi, bred and owned by Milk-n-More Farms of Cecil, Wis., has been named 2019 Cow of the Year and will be recognized at a special ceremony on Oct. 2 during World Dairy Expo. (Photo: CYBIL FISHER)

MADISON – A seven-year-old Jersey from Cecil, Wis., has been named the 2019 Wisconsin Cow of the Year.

Milk-n-More Tequila Naomi, bred and owned by Milk-n-More Farms , will be recognized at a special ceremony on Oct. 2 during World Dairy Expo.

According to the Wisconsin Department of Agriculture, Trade and Consumer Protection (DATCP), each year a different Wisconsin purebred cattle association selects a cow to represent her breed as the Cow of the Year at World Dairy Expo.

This is the second time in four years that the Wisconsin Cow of the Year has been named from a dairy herd in the small village of Cecil in Shawano County. Grand-View BBBK Dreamer, a 10-year-old Ayrshire bred and developed by Grand-View Ayrshires took the honors in 2016.

Advent Anna-Red EX-94, an eight-year-old Red & White Holstein bred and owned by Hilrose Holsteins of Sherwood, was named Wisconsin Cow of the Year in 2018 while a seven-year-old Milking Shorthorn, Mapleton Vly LT Borroloola, bred and owned by Mapleton Valley Farms LLC of Oconomowoc, held the title in 2017.

Milk-n-More Farms is owned by Ron and Nicolle Wussow, who purchased the fifth-generation farm from Nicolle’s parents, Roy and Mary Ellen Fischer, in 1999. Nicolle said family members, who have been showing Jerseys competitively since 2005, “knew Naomi was special from the time she was in the hutches".

"It was easy to see she was a complete calf, and she went on to use that overall style, balance, and correctness in the show ring,” the Wussow family said.

While Naomi’s show ring career is impressive, she also is also valuable when it come to producing milk. The bovine has a lifetime production record of 115,010 lbs. of milk, 5,068 lbs. of fat, and 3,796 lbs. of protein.

When first classified, Naomi's first appraisal score was Very Good-89%, was later raised to Excellent-91%, and in 2017 was scored Excellent-93%.

Nicolle said Naomi has been a blessing to the family throughout the years.

“She was one of our children’s favorite 4-H project animals with her sweet disposition and seeming love to compete at the shows,” Nicolle Wussow said.

Daughter, Kaila, is a University of Wisconsin-River Falls (UWRF) graduate who works for the American Jersey Cattle Association as assistant director of communications. She resides in Twentynine Palms, Calif. with husband Joseph Tauchen, a graduate of UWRF and member of the U.S. Marine Corps. Son, Colin, is a sophomore at UWRF majoring in ag business with minors in dairy science and crop science.

The Wussows are active members of the Wisconsin Jersey Breeders Association.

The Cow of the Year ceremony is organized annually by the Wisconsin DATCP and will be held approximately 9:30-10 a.m., Wednesday, Oct. 2 during the International Jersey Show. The award will be presented to the family by DATCP Secretary Brad Pfaff and 72nd Alice in Dairyland Abigail Martin.

The 2019 World Dairy Expo is Oct. 1-5. The annual dairy and trade show draws more than 70,000 visitors to Madison from around the world. Learn more at worlddairyexpo.com.