Research on farms helps farmers quantify the effects of runoff on soil erosion and nutrient loss. 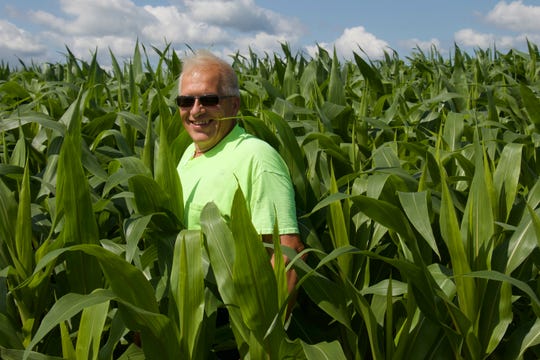 MADISON – For Jack Herricks, whose farmhouse is just yards away from a watercourse draining hundreds of acres, issues of runoff, pollution and farm prosperity are practical realities.

The Herricks family milks 600 cows east of Cashton, in west-central Wisconsin. They also raise crops on 1,400 acres, many of them directly uphill from the house. During the floods of 2018, as water streamed off the fields, the milking parlor was kaput for 11 hours. That's an eon for dairy cows - and farmers.

The Herricks farm is a participant in Discovery Farms, a UW-Madison Division of Extension initiative that focuses on practical matters like nitrogen and phosphorus runoff and soil erosion.

Those issues have become more pressing along with the massive rains, Herricks says. "In 2017, we had six or more inches overnight. In '18 we had two floods. On Aug. 27, varying reports had 11 to 14 inches, on saturated ground, and then another four inches on Labor Day night that caused even more damage."

Farmers have battled erosion and runoff for decades. They have revised field layouts, crop choices, and planting strategies and schedules. But the growing recognition of the harm that runoff causes to surface waters, combined with monstrous rainfalls that are more common with the changing climate, is pushing the need for further progress.

These motivations apply to Herricks, who has participated in Discovery Farms for seven years. "My family has been milking here for 107 years, and we're focused on sustainability, harmony and patience," he says. "Being sustainable means we can continue to be self-supporting, and productive and profitable ... so we can feed ourselves and our cattle, maintain the land and equipment."

Discovery Farms was founded in 2001, and the Jersey Valley Watershed project began in 2009. Within seven years, six small watersheds near Cashton, some in the city but most on farms, were outfitted with structures to measure water flow and contaminants. The results were presented to farmers and the public, with comparisons.

Much of the initial work focused on measuring runoff, but it's also about social sustainability. In 2005, after February temperatures soared into the 70s, manure ran off the snow-covered fields and cascaded into nearby Jersey Valley Lake, a flood-control impoundment.

Fingers started pointing, Herricks says. “And for some local people, it was like we (farmers) went from being a normal part of the community, to ‘You are guilty.’ We were in defensive posture, and we did not know how it was going to change. We needed facts, and numbers, to reassure ourselves and the general public that we were following good conservation practices, and that many of our efforts were doing what they were supposed to do.”

“By the time Discovery Farms left Cashton in 2017, … the era of finger pointing and distrust had left.”

At public meetings, Discovery Farms presented data on rural and urban runoff measured at the project’s monitoring stations. “Yes, there is room for improvement,” Herricks says, “but we were not nearly as bad as suspected by the public, and finally we could document this.

“By the time Discovery Farms left Cashton in 2017, the relationship had changed, the era of finger pointing and distrust had left. It was a pretty dramatic shift. The monitoring data collected by Discovery Farms helped to transition farmers out of a defensive mode.”

Discovery Farms is a classic embodiment of the Wisconsin Idea, says co-director Amber Radatz. “We expand upon typical university-led research by taking the lab and research effort onto privately owned, working farms in Wisconsin. This allows farmers to participate in and help direct research so the research results are grounded in the real world, dealing with the issues of weather, soil variability and landscape that farmers face daily.”

Discovery Farms’ research results have been used by farmers and crop consultants on their farms, extension personnel and others in educational events, and policymakers and agency personnel in tailoring agricultural policies to reflect the nuances of landscapes and farming systems. 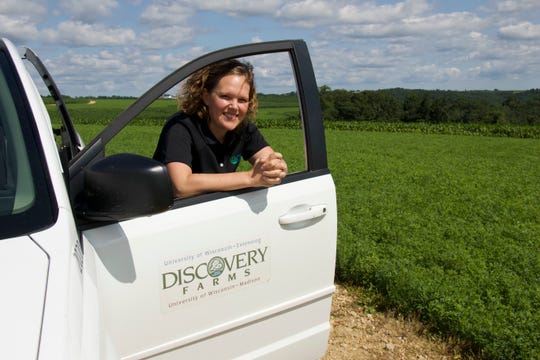 Amber Radatz, co-director of Discovery Farms in the UW–Madison Division of Extension, has a background in manure management and nutrient loss and has a master’s degree in soil science from UW–Madison. Radatz works from Pigeon Falls, Wis.. Co-director Eric Cooley, based in Green Bay, focuses on farm tile drainage, depth to bedrock, and leaching of feed storage solutions. (Photo: David Tenenbaum/UW–Madison)

“In my 15 years of involvement with Discovery Farms, I’ve seen farmers go from learning to leading discussions on water quality because of information from this program” Radatz says. “And I’ve witnessed casual conversations in many settings about runoff and water quality.”

The focus of Discovery Farms is water quality, says Heidi Johnson, interim director of the Agriculture Institute in the Division of Extension. “They are working on farms, with farmers, taking farmer’s ideas and translating them into research. They work with others from Extension across the state and collaborate with farmers to come up with answers.”

As water quality gets more statewide focus, Discovery Farms projects are monitoring the impact on water quality based on agricultural practices, Johnson says. “Because of their long-standing relationship with farmers who have bought in, they have the capability to set up the data collection systems that we can’t always invest in.”

While modeling is often used to assess the environmental impact of agriculture, Discovery Farms has a unique asset: installed equipment that collects real-world information.

In the Driftless Area landscape, soil can be rapidly lost, but Discovery Farms data shows that farming systems can hold soil in place even during large storms. No-till and pasture systems reduced soil loss by 90 percent compared to systems with two tillage passes per year, Radatz says.

Farmers pay for nitrogen and phosphorus fertilizer, so runoff harms the bottom line, not just the environment. And soil losses reduce a farm’s long-term productivity. 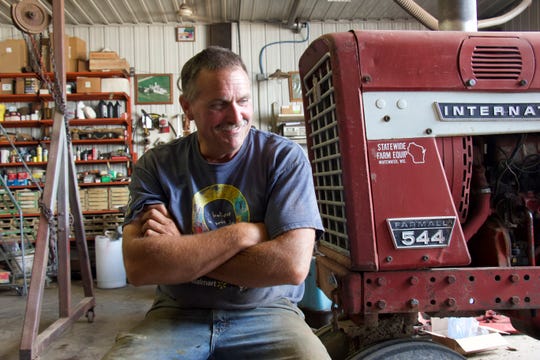 Having numbers to augment seat-of-the-tractor observations can help, says Paul Malin, who grows corn and hay on 330 acres he owns, and milks about 100 cows. Malin, who also does custom planting, baling and combining, says a runoff monitoring station that operated on his farm for seven years influenced several conservation-related changes.

“We moved some dirt around so we weren’t releasing as much particulate phosphorus from the cow yard, and are paying more attention to fertilizer applications,” Malin says. “Guys throw a lot of fertilizer away.”

Although Malin was using both no-till and minimum tillage beforehand, “we’re more no-till now,” he says.

Facts matter, Radatz says, and although it does take time, effort and money to get them, they are worth it. “What Discovery Farms is, is a research group that’s farmer-led and based on reality.”