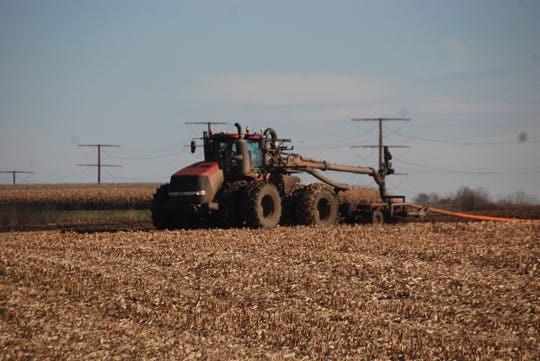 The Department of Agriculture, Trade and Consumer Protection is revising ATCP 51, the administrative rule that regulates the local government approval of new or expanding livestock facilities in Wisconsin. Manure runoff, nutrient management and waste storage are some of points addressed in the proposal. (Photo: Jan Shepel file photo)

With public hearings to explain proposed changes to Wisconsin’s livestock facility siting rule and gather public comment on the proposal wrapping up in the beginning of September, the Wisconsin Farm Bureau Federation (WFBF) urges farmers "have a seat at the table" and submit online comments.

The Wisconsin Department of Agriculture, Trade and Consumer Protection (DATCP) opened a comment period on the Livestock Facility Siting Law (ATCP 51). Wisconsin Farm Bureau Federation is encouraging farmers to submit online comments on the proposed changes by the Sept. 13 deadline.

The administrative rule, formally referred to as ATCP 51, sets standards and procedures that local governments must follow if they require permits for new or expanding livestock operations, according to DATCP. Citizens should comment now if they want their ideas to be considered for the final draft that will go to the Board of Agriculture, Trade and Consumer Protection for approval before sending it to the Legislature.

Farmers and rural residents who wish to comment on the proposed changes can do so online by visiting docs.legis.wisconsin.gov/feedback/agencyform?cite=cr/2019/98 or via U.S. Postal Service by sending written comments to DATCP-ARM, ATTN: Chris Clayton, P.O. Box 8911, Madison, 53708-8911; email to livestocksitingcomments@wisconsin.gov or post comments online at http://docs.legis.wisconsin.gov/code/comment

“The proposed changes came from DATCP’s technical expert committee, a group that does not include any farmers.” Holte added. “Farmers need to have a seat at the table when crafting significant farm policy.”