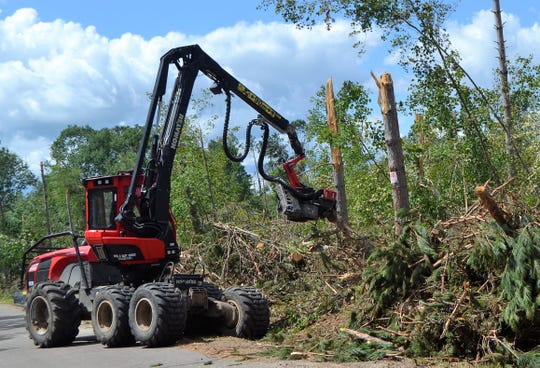 Matt Jensen of Crandon, co-owner of Whitetail Logging, works to cut and remove brush and logs from the side of Star Lake Road in the town of Doty. The damage to region was widespread, he said. (Photo: Kent Tempus/USA TODAY NETWORK-Wisconsin)

Marinette County was included in the governor’s request letter but is still under review by FEMA.

“We are glad the federal government moved quickly to approve disaster assistance for folks that were devastated by the severe storms last month,” said Gov. Evers. “This is an important step in helping communities across our state rebuild and recover.”

Tuesday’s declaration allows local governments affected by the storms occurring July 18-20, 2019, to apply for assistance, which will help communities recover some of the costs incurred through emergency protective measures, repairing infrastructure, and removing debris.

Multiple rounds of storms beginning on July 18 and continuing through July 20 brought heavy rain and flash flooding. Strong winds with speeds up to 100 mph downed hundreds of thousands of trees and numerous power lines. Two people were killed during cleanup following the storms. In addition, more than 300,000 customers were without power for days.

The major disaster declaration is for Public Assistance, which covers eligible projects submitted by counties, cities, townships, and certain private, not-for-profit organizations. The program is not for businesses or homeowners as the level of damage in these areas, unfortunately, does not currently meet requirements for federal relief.

“We are pleased that this declaration has been approved. The communities impacted by the storms have shown great resilience on the road to recovery,” said Dr. Darrell L. Williams, WEM Administrator. “This declaration is a huge step toward helping those communities rebuild after such as devastating loss.”

Local governments are now eligible for federal assistance and should contact county or tribal emergency management directors for further information. Under the program, FEMA provides 75 percent of eligible costs, while state and local agencies share the remaining 25 percent.