Little Alto community rallies in a big one one year after tornado. 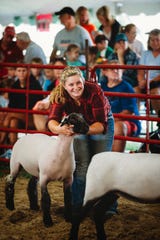 Liz Wetzel is all smiles as she leads her lamb in front of the judge in the show ring. (Photo: Katie Engelbert/Red Plum Photography)

Long limbs that once provided shade on her family's town of Alto farmhouse are long gone. The lopped off branches are a stark remnant of the tornado that upended the Wetzels' lives last summer.

The violent winds leveled the farm buildings sheltering the milking herd and pre-fresh cows, drove two-by-four planks through the walls of one of the family’s homes and bent sheet metal around the tree branches like twist-ties.

Liz and her sister, Karsyn, were at a movie theater in Oshkosh with their grandma that late August afternoon when the sisters learned that a tornado had touched down near Waupun.

"I sent texts to both of my parents and got no response," said Liz, who persuaded her grandmother to leave the theater and head home. While en route, she was able to connect with her dad, Eric Wetzel, who told her that he couldn't talk because their dairy barns were gone.

"I thought he was joking at first, and that things couldn't be as bad as they seemed. But when we were finally able to get down our road, at first it didn't look so bad. But then I saw the trees and the devastation," she said. "There was twisted metal and splintered wood everywhere."

The Wetzels' farm, Pebble Knolls Dairy, just east of Highway 49 on Hemp Road, bore the brunt of the EF-1 tornado, one of 19 confirmed tornadoes that carved a swath of destruction across Wisconsin on Aug. 28, 2018 — 12 of them touching down in Fond du Lac County. 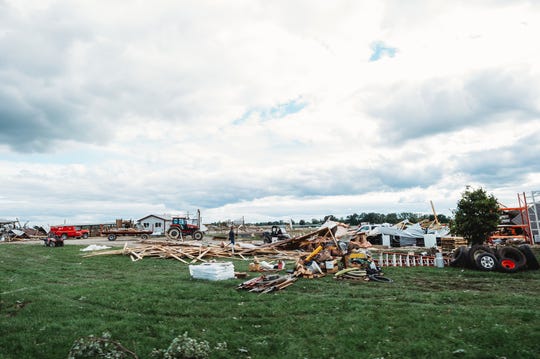 Within hours, cattle trailers were pulling into the driveway of Eric and Danielle Wetzel's farm, founded in 1970 by Eric's parents, Dick and Gail Wetzel. One by one, the family's 680-cow milking herd were loaded into trailers and trucked to farms as near as Daane Dairy down the road, to Crave Brothers Farm in Waterloo and to Rosendale Dairy, which welcomed 300 of the Wetzel’s cows in their facility near Pickett.

While no one was injured in the storm, the family lost a handful of milking cows that were injured by flying debris.

"I honestly don't know how we got through those days. We just had to keep moving, keep putting one foot in front of the other. We had no other choice," said Danielle Wetzel.

"We were so absorbed in coping with everything on our own farm that I didn't realize how widespread the damage was, especially in the community of Alto," Danielle said.

As the summer gave way to fall, the Wetzel family continued with plans to rebuild the destroyed buildings with the goal of gathering their Holsteins back on the home farm by spring.

"We kept about 125 cows on a farm on Radio Road. The family was gracious enough to let us use their milking parlor, so we at least had a small milk check coming in," Danielle said.

By the beginning of May, Danielle said all of their "girls" were back at Pebble Knolls, along with the familiar sights, sounds and smells of a vibrant, working farm.

"I missed the smell of manure and the feed," she laughed. "And to hear a moo and know it's coming from your farm and not the farm down the road. That was one of the best sounds you can ever imagine." 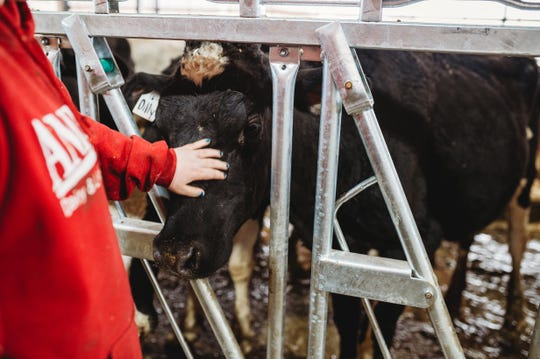 The Wetzel family continued to be humbled by the outpouring of support from the local business community when Frye Livestock purchased Liz's market lamb with a robust bid of $15 per pound during the Market Livestock Auction at the Fond du Lac County Fair in July.

"We just started talking about how blessed we've been by everyone the past year, and since it was my last year of showing market animals at the Alto Fair I wanted to give back to the community, showing them how much I care," Liz said. "These people were there for us in our greatest time of need and I wanted to do something that would last for generations to come."

With the Alto Fair on the horizon, Liz thought of all the stately trees surrounding the little fairgrounds that had been lost in the storm — trees that had provided the perfect picnic spot for generations of families returning to the two-day event.

"That fairgrounds is our most favorite place in the world," said Danielle. "And Liz decided that she would donate the proceeds from the sale of her market lamb to the fair board to replace the trees."

As Liz readied her pair of market lambs, Dusty and Gusty — a nod to last year's tornado — word of the 17-year-old's intentions spread through the community. When Rens Nursery owner Dan McGurk learned of the teen's plan he decided to jump on board.

"When she said she was going to donate her check back to the community for the purchase of trees, I told her I would match whatever she sold it for," McGurk said.

As Liz prepared to enter the sales arena under the striped tent with her grand champion lamb, Dusty, on Aug. 7,  she shared her plan with the crowd, thanking them for their support and encouragement in advance. What she didn't expect was the tidal wave of support that ensued when the auctioneer invited the first bid at $10 per pound.

"It was an amazing sight to see all the business people holding up their bidding signs. One man kept his sign held high in the air for about five minutes; he didn't seem to care how high the bids went," said Liz. "I didn't want to lose my composure, but I was crying at the end."

When the gavel hit the block, NBW Bank had purchased the 124-pound lamb for a staggering $34 per pound, for a total of $4,216. With the matching contribution from Rens Nursery, Wetzel's market lamb garnered a total of $8,432 for the tree donation.

NBW President Jerry O'Connor, who cast the winning bid, said he was impressed by Wetzel's act of selflessness in wanting to donate the proceeds of her lamb as a way to give back to the Alto community.

"Everyone in the Alto area was familiar with the fact that a lot of damage resulted from last year's storms and the Wetzel family took a severe hit," O'Connor said. "We believed in what she was doing, and we were going to keep raising our bidding card. I'm just glad the person I was bidding against finally gave up!"

"Just hearing the word 'tornado' is really hard. Not only was it Liz's last year of showing at the Alto Fair, but just looking around and seeing how far Alto has come since the tornado," she said. "Not just our family, but the whole community."

And for a breathtaking moment after  the auction, fairgoers were reminded how quickly Mother Nature can turn ugly when Fond du Lac County activated sirens for a tornado warning, sending attendees clamoring for shelter.

Wetzel said it was important for her family to be able to pay it forward.

"But it still doesn't feel like enough because the support we got was so tremendous," she said, her voice catching.

One person who can relate to the Wetzel family's need to repay the community's kindness is Alto Fair Board President Mark Navis. The same community members that rallied behind the Wetzel family also showed up on his doorstep 14 years earlier when a tornado struck his farm.

"The spirit of this community is fantastic. People that I didn't even know showed up to help," Navis said. "You just feel this need to give back because so many people helped you. And they did it again for this last tornado."

When a tornado carved a path across the townships of Alto and Waupun, leveling farm buildings and uprooting trees and lives, volunteers banded together to lend their neighbors a helping hand.

Despite being told their community would be without power for 10 to 14 days last August, the undaunted army of volunteers banded together and moved the fallen trees and debris from the streets. Within 48 hours, power was restored.

McGurk estimated that the donation is enough to cover the cost of 80 1-inch trees — way more than the small Alto fairgrounds needs. While it's not official, Navis is optimistic that Wetzel's generosity may be shared throughout the entire Alto community and beyond.

O'Connor says the bank would still like to present Liz with a small monetary token of thanks.

"In today's society you read a lot of bad stories, and this is a good story that we were pleased to be a part of," he said. 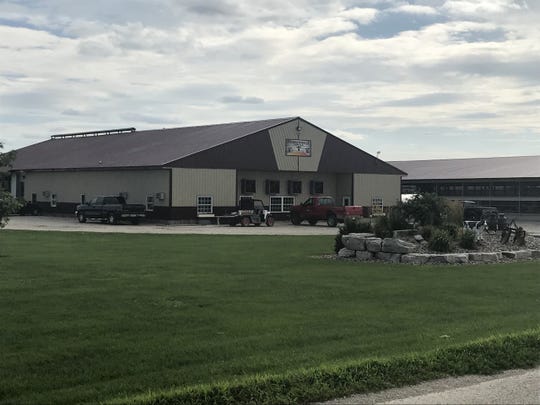 The Wetzel family will host an open house of their new facilities at Pebble Knolls Dairy from 1 to 4 p.m. Sunday, Aug. 25, R W12139 Hemp Road, Brandon.