Like a job interview: Selecting the right nutrient management planner can be crucial

A planner should be someone committed to helping the farmer use his or her resources wisely and increase their bottom line.

Like a job interview: Selecting the right nutrient management planner can be crucial 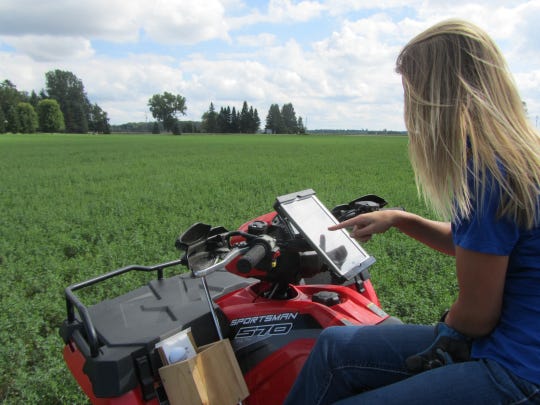 Nutrient management plans are becoming more and more prevalent in Wisconsin, and there are lots of ways to go about getting one implemented on a farm.

Farmers can educate themselves about how to develop a plan themselves, hire an independent crop consultant or employ the services of a farm supply store or local cooperative.

Still another option that has gained popularity over the years is to work with the agronomic consulting team at AgSource Laboratories. AgSource has 11 consultants across Wisconsin and northern Illinois to conduct soil tests and help farmers develop and implement nutrient management plans that suit their farms.

One of the best things about working with AgSource is its unbiased advice, according to Chuck Bolte, NMP manager for AgSource Laboratories in Bonduel.

“I’m not selling a product other than my knowledge,” Bolte said. “I can share ideas to help farmers improve their operations.”

Nutrient management refers to the use of manure and other fertilizer to meet crop nutrient needs, while reducing the potential for them to run off fields to lakes, streams and groundwater, according to the DATCP. A plan helps ensure that crops get the right amount of nutrients — nitrogen, phosphorus and potassium, often referred to as N, P and K — at the right time, source, rate and place. This benefits the farmers by improving crop yields and reducing costs, and the environment by keeping nutrients on fields and preventing them from running off to streams or down to groundwater.

So what should a farmer look for when hiring someone to develop a nutrient management plan? Bolte believes a planner should be someone committed to helping the farmer use his or her resources wisely and increase their bottom line.

“We take ownership in the farms we work with,” Bolte said. “I tell our farmers when I hand over their plan, ‘If you’re not successful, I’m not successful, and I won’t be here.’

Chris Clark, a territory sales representative for AgSource’s Bonduel laboratory, said selecting a nutrient management planner is much like a job interview.

Some planners will offer to write a plan without even visiting the farm. They might get information about the farm from the store that sells the farmer fertilizer, or even over the phone.

“There’s a lot you can see on the farm without even asking questions,” she said. “We have to have a face-to-face meeting with the farmer. The AgSource staff can get on a pretty personal level so they get comfortable with you. It’s a two-way road — you need a pretty good relationship to write a good plan for that farmer.”

Bolte said AgSource staff members stay in touch with the farms they work with through the growing season to make sure the plan is being implemented as written.

“We want to know what is working and what isn’t,” he said. “We want to provide a document to you that you can use that is of value to you.”

Bolte, who oversees the nutrient management planning staff across AgSource’s territory, said he encourages his planners to take soil samples and familiarize themselves with all aspects of the farming operation.

They communicate with the farmer throughout the year in person, via phone and email.

Bolte works with about 25 farms that cover 56,000 acres. Several of his farms are potato operations that cover lots of acres.

The average AgSource planner writes plans that cover about 25,000 acres, he said. Clark said although there is a cost to hiring a nutrient management planner, farmers often see a quick cost savings by following the plan’s recommendations.

Clark said many farmers are already doing the right things, but they don’t always have a way to show neighbors or regulators until they have a nutrient management plan in hand.

“It’s another source of recordkeeping,” she said. “Farmers can be proud of their nutrient management plan. It shows that they care about the soil and their water resources, because that’s where they live.”

Bolte said one farmer he worked with took his nutrient management plan to show a neighbor who had been complaining about his manure-spreading practices.

“He told his neighbor how he was going to change his manure spreading and showed him on paper, and the neighbor said, ‘I won’t bother you anymore,’” Bolte said.

In another case, Bolte explained to a farmer why he should change his manure spreading schedule from fall to spring, and by doing so saved the farmer $40 to $50 an acre.

It doesn’t take long to make believers out of farmers in those types of situations, he said.

AgSource planners help farmers through unexpected incidents that might occur, such as a manure spill, or if Mother Nature complicates things during the growing season.

“We will serve as an advocate for the farm,” Clark said.

The amount of time it takes to write a plan varies greatly, depending on the complexity of the plan, Bolte said. A plan for a 200-acre cash crop might only take four or five hours, while a plan for a large operation might take several days or weeks to develop.

Bolte said farmers should be leery of low-ball offers for nutrient management services.

“If the price is cheap, you generally get what you pay for,” he said.

This article is the second article in a three-part series.