A Brazilian-owned meat processing company undercut its competition by more than $1 per pound to win nearly $78 million in pork contracts. 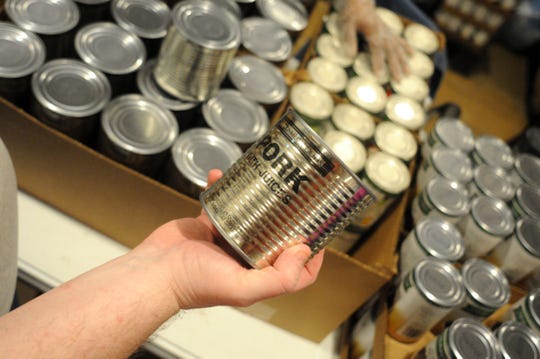 CHAMPAIGN, Ill. — A Brazilian-owned meat processing company undercut its competition by more than $1 per pound to win nearly $78 million in pork contracts through a federal program launched to help American farmers offset the impact from an ongoing trade war.

As a result, JBS USA has won more than 26% of the $300 million the USDA has allocated to pork so far — more than any other company, according to an analysis of bid awards by the Midwest Center for Investigative Reporting .

The USDA’s Trade Mitigation Program was announced last August, and included direct payments to farmers, as well as $1.2 billion in food purchases from farmers and ranchers whose crops normally benefit from international markets. The plan called for $558 million worth of pork purchases. The program is intended to help U.S. farmers and ranchers hurt by the ongoing trade disputes with China, Mexico, Canada and other trading partners.

The analysis found that JBS bid 33% less on the contracts – undercutting its competitors, even Tyson Foods, the second largest meat processor in the country.

JBS USA is the U.S. division of JBS SA, the world’s largest meat producer. The company owns more than 300 live hog operations in the United States.

JBS’ facilities in Minnesota, Iowa, Illinois and California have won trade mitigation contracts with the USDA.

“Who’s the government going to purchase it from? The Brazilian-owned JBS or the Chinese-owned Smithfield? They’ve allowed enough concentration in the packing industry, you’re running out of choices,” said Brian Duncan, a hog farmer from Northwest Illinois and vice president of the Illinois Farm Bureau.

Following publication of this story, the USDA provided a response from Secretary of Agriculture Sonny Perdue:

“We’re buying U.S. produced agricultural products. The premise behind procurement is to take product off the market and support prices. This will help U.S. Farmers,” said Perdue. “These are legal companies operating in the United States. This is no different than people buying Volkswagens or other foreign autos that are manufactured in the United States, where their executives may have been guilty of some issue along the way. They still buy the cars. JBS is a Brazilian company operating in the United States, buying product from U.S. farmers. What we do through these companies — it’s not to help the companies — they offer a bid to us based on buying U.S. farmers production. This helps U.S. Farmers by supporting prices. Companies are able to buy from our farmers more because we are buying that product and taking it off the market.” 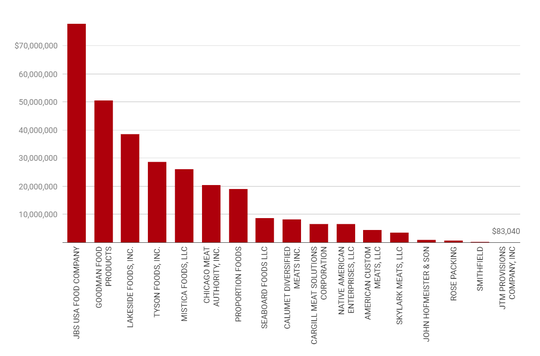 JBS has won more than 26 percent of the money the USDA has spent on pork through the Trade Mitigation Program so far. (Photo: Chart: Christopher Walljasper/Midwest Center for Investigative Reporting)

Greg Gunthorp, who raises hogs near Mongo, Indiana, said its JBS’ size that allows it to offer such low prices.

“They’re a huge global corporation,” he said. Because of that, they are less impacted by the demand problems purely American pork processors are facing. “To claim we’re bailing out the farmer and bailing out agriculture, and giving it to foreign multinational corporations is a joke.”

In an emailed statement, JBS stressed its American roots.

“We operate U.S. pork plants, processing American hogs raised by U.S. farmers — the true program beneficiaries,” said Nikki Richardson, a spokesperson for JBS USA. “Like other companies in the program, our sole intent for participating was to support U.S. producer prices and help our American producer partners. It was not a bailout.”

The pork JBS is selling to the federal government comes from American farmers, the company said. JBS said its facilities in Worthington, Minnesota, Marshalltown, Iowa, Ottumwa, Iowa and Beardstown, Illinois work with more than 3,165 pork producers, paying $3.5 billion in livestock payments each year. 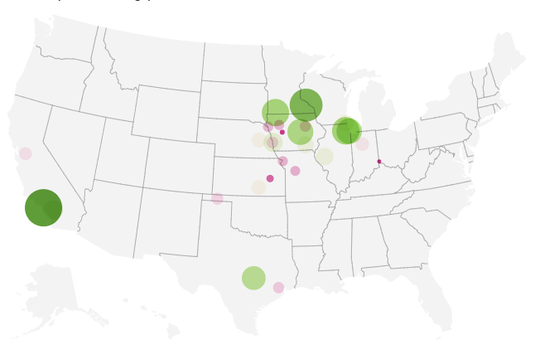 The pork purchased through the USDA's Trade Mitigation program is raised and processed in the United States. These are the cities where those companies are processing pork. (Photo: Chart: Christopher Walljasper/Midwest Center for Investigative Reporting)

But many of those producers are on long term pricing contracts with JBS and may not see much benefit from the USDA’s purchases.

“How does that trickle down to farmers raising pigs for them?” asked Gunthorp. “They’re on a contract. That contract’s not changing because JBS sold more pork to the government.”

Duncan said he hasn’t seen much uptick in prices because of the trade dispute commodity purchases.

“There was a slight run up in price late last fall,” he said. “There was a rally and the rumor was the government was making some purchases.”

The first USDA awards for pork products were released in November. But Duncan said a bigger factor affecting hog prices has been the African swine fever that’s been hurting hog farmers in China and Southeast Asia since last August.

The disease has increased global demand for pork and could be an opportunity to sell more U.S. pork to Asian markets. But that depends on trade with China reopening.

“There’s opportunity there for us to be a major supplier,” said Duncan. “But I don’t know if this administration is going to let us take advantage of that opportunity.”

Ted Schroeder, an agriculture economist at Kansas State University, said many of the impacted markets will barely notice these purchases.

“I just don’t see these programs being huge support for farmers,” said Scheoder.

While pork makes up nearly half the food to be purchased through the USDA trade mitigation program, it’s small in comparison to the amount of pork produced each year, Schroeder said.

“Once completed, it will have resulted in moving a week’s worth of U.S. pork production, which is significant during a challenging time,” said Jim Monroe, Senior Communications Director for the National Pork Producers Council, referring to the first round of pork purchases. “Our preference is an end to trade disputes that have prompted retaliatory tariffs against U.S. pork from two of our largest export market, Mexico and China.”

The U.S. Department of Agriculture has bought $748 million worth of food from farmers and ranchers, nearly two thirds of the original $1.2 billion goal according to the Midwest Center analysis.

That’s five times as much on food as the agency bought in the first six months of the program, according to analysis by the Midwest Center for Investigative Reporting.

The program was intended to be temporary relief for farmers struggling against the effects of the trade wars. On May 13 President Trump announced the USDA would buy another $1.3 billion in food from U.S. producers.

An agency spokesperson said in an email that the first round of commodity purchases won’t be completed until January 2020. The USDA has yet to give details on the second round of purchases.

JBS is under scrutiny by several U.S. senators who say the company shouldn’t be able to participate in the USDA program.

“It is counterproductive and contradictory for these companies to receive assistance paid for with U.S. taxpayer dollars intended to help American farmers struggling with this Administration’s trade policy,” said the May 29 letter to Secretary of Agriculture Sonny Perdue, from nine U.S. senators.