Tobacco out, hemp in for Tennessee farmers

Many are calling Tennessee the agricultural belt buckle for growing hemp.

Tobacco out, hemp in for Tennessee farmers 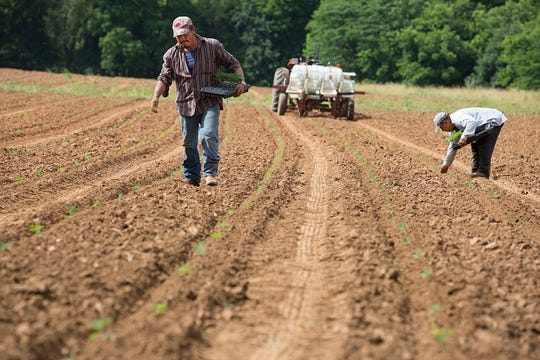 SPRINGFIELD, Tenn. (AP) - Bill Corbin always knew a day would come when he would no longer be able to call himself a third-generation tobacco farmer. That day has arrived.

The Springfield farmer says he had contracts to grow tobacco until this year, but will now devote all his energy and acreage to growing hemp.

Tobacco is in his past, he says. Hemp is the future.

"Tobacco's been in my DNA my entire life. I've been in tobacco fields since I was knee-high to my father and grandfather," says Corbin, 58, who has been a licensed hemp grower since it became legal to do so in 2015. "This is the first year of my productive life that I'm not raising tobacco. I can't.

"To go in the direction, I want to take with this (hemp) crop is so labor-intensive. It's a big transition, but it's not an uncomfortable transition."

Corbin is among the most prominent of Tennessee farmers who are transitioning from tobacco to hemp.

A combination of changing laws, shifting attitudes, consumer demand and favorable growing conditions have many calling Tennessee the agricultural belt buckle for growing hemp — especially in Robertson County, where Corbin lives, as well as Sumner County.

"Tennessee is an excellent place to grow hemp because we have a very long growing period," explains Corbin, who farms 40 acres outdoors to go with 3 acres of greenhouses that provide year-round growing.

"We are so blessed in Tennessee because usually — usually, mind you — we have enough natural rainfall to where we don't have to resort to irrigation. Mind you, because of it, I have such a long history in tobacco — I've got several ways of applying water if necessary — but luckily that's one of the blessings of this part of the world.

"Usually our natural rainfall is sufficient."

But other areas have long growing seasons and sufficient rainfall.

What makes Robertson and Sumner counties especially good for growing hemp, some say, is the combination of protein-rich soil and limestone water.

"We do have a good, conducive environment for growing hemp, but to think it's the best area to grow hemp, I think that's premature," says Dr. Eric Walker, an assistant professor of the University of Tennessee's Institute of Agriculture. "I don't know that is going to be the case. We'll see, I hope so.

"They say that Kentucky was our leading state before, and they credited it to fertile soil and it was just a good production environment. I think we have that in Robertson and Sumner County, and in other parts of the state."

Licensed grower Mike Solomon, who works with a hemp farm in Greenbrier, says he's heard the same things about soil in Robertson County and adds: "For some reason — what people have told me — it's because there's a lot of limestone in the soil up there and it filters the water great. I've heard that from a lot of farmers, that the limestone-fed creeks give you some really great water up there. I noticed that last year. It was true. It could be the land is really great as well, but I know we're seeing from the water standpoint, as well."

The growth of the state's hemp industry is booming. The number of licensed growers in Tennessee has increased from 226 in 2018 to more than 2,900 this year.

The Farm Bill of 2018 removed hemp from the list of federally controlled substances, and the Tennessee Department of Agriculture updated its rules, as well.

"Farmers have been growing and researching this crop in Tennessee since the program began in 2015 as a pilot program," new Agriculture Commissioner Charlie Hatch said in a press release. "The hemp industry and federal laws have changed in recent years, and we're updating our program rules to be more consistent with how other crop programs are managed."

The key shift in Tennessee's rules allows farmers to grow non-certified varieties of hemp, says Walker, calling it a "game-changer" move that allows growing hemp for CBD oil and all its commercial products. Previously, farmers could grow hemp only for fiber and grain.

"Last year, hemp became that small-acre, high-value-per-acre crop. And viable substitute for tobacco at the moment," Walker adds. "In 2015, in the United States, I think there were just under 4,000 licensed acres for hemp.

"Now, we won't grow all the licensed acres, but it's a good indicator that the amount of hemp is sharply rising.

Kentucky, North Carolina and a few other states have experienced growth in their hemp industries. But none have taken off like Tennessee. Walker says farmers like Corbin have taken their tobacco knowledge and transferred it to hemp.

"What sets Tennessee apart — and Kentucky, North Carolina, parts of Virginia and Georgia — there has been and still is a lot of tobacco produced in those areas. So those folks are used to managing a high-value crop, a high-labor crop, managing a lot of labor," Walker says.

"I have no doubt that they will do a really good job growing hemp in our state and our region."

Licensed grower Mike Solomon calls tobacco "a dying industry" and notes tobacco farmers are set up for an easy transition to growing hemp.

"I've never seen an industry move as fast as this one is moving now. We have moved at a very rapid pace thus far, and we continue to move even faster," Joe Fox, managing partner and co-founder of Bluhen Botanicals in Knoxville, told the Ledger recently. Bluhen operates a 2,000-square-foot research and development facility and a new 18,000-square-foot hemp processing plant, both in Knoxville.

But why are Robertson and Sumner counties considered to be among the prime growing areas in the state?

"I guess hemp can be grown anywhere. Some places do better than others in the varieties, and that's what they're starting to do more research on," says Jeff Smith, director of Robertson County's Agricultural Extension office.

"Some (hemp plants) are maybe more favorable to our climate than others, but they've been growing hemp in Oregon and other places for a long time. We have pretty good soil in Robertson County to grow a lot of other crops, so the fertile soils can grow it."

Smith wouldn't go so far as to suggest that hemp will run tobacco out of Robertson County. He notes that the rise in grower numbers statewide could affect the price of hemp sales.

"Supply and demand has got to come into play at some point, and I don't know how much demand is there, but the supply definitely looks like it's going to increase. I'm not sure how it's all going to work out, but it's really been exciting for a lot of folks to have something to do, talk about."

Will Freeman, public information officer for the Tennessee Department of Agriculture, says there's no hard data yet to support the notion that the rise of hemp will be the fall of tobacco.

"It would be hard for us to speculate (hemp's growth), but the amount of Tennessee tobacco that has been produced in recent years has declined," Freeman acknowledges. "At this point in time in 2019, we're seeing less and less tobacco production in Tennessee and we're seeing more licensed hemp growers in Tennessee.

"I wouldn't be able to speculate if it'll overtake or take over for that part of the industry, but I can tell you the numbers do show a decrease in one crop and an increase of interest in the other."

Corbin recently gave reporters from The Ledger a glimpse of his greenhouse operation and fields where a new crop has been put in.

Noting how fast the hemp industry has grown in the past 12 months, Corbin was asked to peer into the future of hemp in Tennessee.

"This crop will be the most transformative crop in this state's history," Corbin predicts. "It soon will be national. That being said, the perceptions that so many people have of instant wealth, it's disturbing that it's successfully been portrayed that way.

"Don't get me wrong, there are exceptions to every rule."

Noting the one-year increase of licensed growers in Tennessee from 226 to almost 3,000, Corbin smiles.

"And it'll increase threefold next year," he adds. "Just as much the number of growers was — the Farm Bill, which the interstate commerce clause, legalized — you might as well say reverse migration, west to east — and there has been a historic overproduction — in Oregon, specifically, and Colorado — but all of that has migrated here.

"And will continue to, because Tennessee is the epicenter of hemp production."

Corbin credits that current and future growth not only to state laws but those within the industry who regulate and support each other. They meet regularly at Tennessee State University.

"Most of that (growth) is because of what the Tennessee Hemp Industry Association and the board of directors did over a two-year period in crafting the rules and regulations in working along with the Tennessee Department of Agriculture," Corbin acknowledges.

"Waller and Associates (law firm) actually worked pro bono to help us craft the language. And we at one time were recognized as No. 1 in the continental United States, at least the top three as far as protective measures for grower and processor alike.

"We absolutely hit a home run in crafting a very safe environment for growers. So you've seen an absolute massive migration of people — from California, from Colorado, from Oregon, to Tennessee — to lease ground to grow here. And that's good and bad. We didn't design it for this massive migration from outside the state, but it is part of our existence, our reality."

So hemp is here to stay.

Corbin is betting his future, if not his farm, on it.