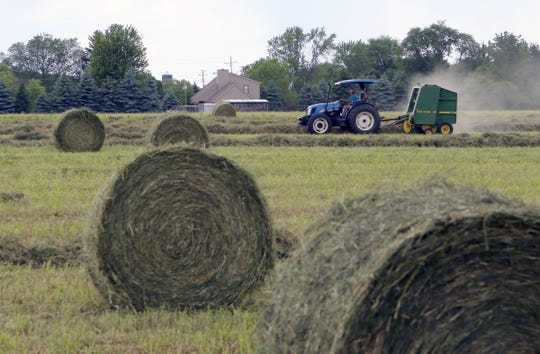 It took until the first week of June for farmers to get a decent week of weather for planting - as the Shawano County reporter said, "finally had tractors going in every direction this week.

While many were still going around wet spots or getting stuck, farmers took advantage of sunny clear conditions, working long hours to as much fieldwork done as possible in the 5.2 days that were suitable for fieldwork, according to the U.S. Department of Agriculture Wisconsin Crop Progress and Condition report.

Plantint, tillage, manure spreading, spraying and haying were going full force even though scattered showers interrupted fieldwork. Farm reporters noted that the wet spots in fields were shrinking, according to the USDA report.

However, with crop insurance deadlines looming, some farmers were changing planned grain corn acres over to other crops. Many reporters across the state said there would be prevented plantings in their area.

"The final plant dates for the spring planted crops are quickly approaching for crop insurance and many producers know that at this point of the growing season, your chances of getting a crop to produce as it would if it was planted in May are small," said the Kewaunee County reporter. "But some still need to make sure enough corn silage and alfalfa are planted for feed purposes heading into next winter. It appears in this area that there will not be as many acres of grain corn and soybeans planted simply because it is getting too late to get them in the ground."

In Chippewa County, many corn and soybean fields had wet areas that either never got planted or were drowned out due to all the rains in May. Several producers in St. Croix County worked up fields for alternative crops to get forage.

Soybean planting iwas 14 days behind last year with 60% of planting complete and 26% of soybeans emerged.

Alfalfa harvest started with thin stands, keeping feed supplies tight. The first cutting of alfalfa was seven days behind last year, according to the USDA report.

In Clark, Price and Taylor counties, many farmers are cutting what's there for alfalfa "hoping for a good second crop or rolling it over and putting in silage corn or ryegrass mixtures," the reported noted. "Some are cutting/chopping what's there because they're out of feed."

St. Croix County reported medium yields for hay with some farmers working up fields to put in alternative crops to get forage.

The Shawano County reporter said alfalfa harvest is showing low yields and low quality, but a few fields finally have plants emerging. Alfalfa yields are down in Kewaunee County as well, "adding more pressure to the growing crops to produce enough so that producers have adequate feed supplies until next year," the reporter said.

Overall, crops benefited from the heat and sunshine last week, putting on a surge of growth.