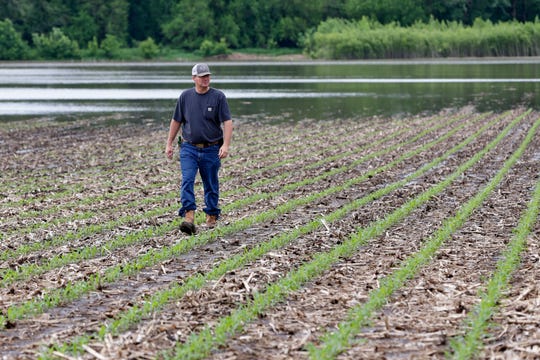 In this May 29, 2019 photo, Jeff Jorgenson looks over a partially flooded field he farms near Shenandoah, Iowa. About a quarter of his land was lost this year to Missouri River flooding, and much of his remaining property has been inundated with heavy rain and water from the neighboring Nishnabotna River. (AP Photo/Nati Harnik) (Photo: Nati Harnik, AP)

WASHINGTON – President Donald Trump has signed a $19.1 billion disaster aid bill aimed at helping communities across the country bounce back from hurricanes, floods, tornadoes and fires.

Trump tweeted a photo of himself holding the signed bill in what appeared to be his office aboard Air Force One. The tweet came shortly after Trump landed in Ireland following a ceremony in France commemorating the D-Day invasion.

Trump tweeted the aid, which will benefit states including Georgia and Florida, is “So important for our GREAT American farmers and ranchers.”