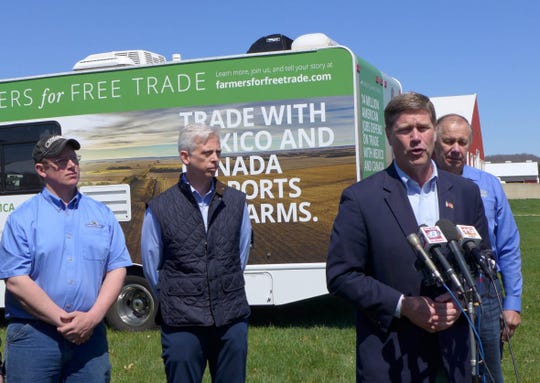 Wisconsin farmer groups are coming together to ask for an end to increased tariffs and trade uncertainty.

The event was held by national advocacy group Farmers For Free Trade, which supports ending tariffs with countries like China and approving the new United States-Mexico-Canada Agreement (USMCA).

"All of the different trade actions that have taken place in the last several months have placed a higher and higher burden on agriculture across this country," said Jim Holte, president of the Wisconsin Farm Bureau. "We need to see some improvement, in the short term hopefully. And one of the things to do that would be to get some of these tariffs removed and get the USMCA passed by Congress so we can have a better trading situation."

Kind said lack of action from the Trump administration to get these tariffs removed has been devastating for Wisconsin farmers.

"They're losing market share right now in very lucrative export markets that we’ve had in the past. And the longer this continues, the harder it is to get those markets back for our farmers," Kind, a Democrat, said.

Kind said the trade disputes need to be resolved before Congress can consider approving the USMCA.

He said U.S. dairy farmers also need to reach a consensus on how to move the industry forward rather than focusing on domestic competition.

Jim Mulhern, president of the National Milk Producers Federation, said he thinks the dairy industry did reach a consensus on supporting new risk management programs for farmers in the 2018 farm bill.

"For the future of the U.S. dairy industry, more and better trade agreements are going to be critically important, or we’re going to continue to have this supply and demand imbalance," Mulhern said.