The demise of the honeybee may portend the end of the world but one Fishers resident who chose to come to their rescue faced a nest of regulation. 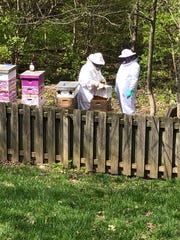 FISHERS, Ind. (AP) — The demise of the honeybee may portend the end of the world, but one Fishers resident who wanted to come to the rescue has faced a hornet's nest of regulation.

A nine-month-long neighbor's dispute with allegations of swimming pool bee swarms and hidden yellow jacket nests led to hours of grueling research and document-digging by city officials and residents alike and a compromise that both sides are forced to grudgingly accept. Fishers eventually gave permission for a limited number of honeycombs near the Covington Estates subdivision at 99th Street and Lantern Road.

"My neighbor didn't like the beehives next to his property," said Jerry Gibbs, who said he was simply looking for a new hobby that helped the environment when he decided to check out beekeeping about three years ago. "He said they swarmed around his swimming pool, but those were yellow jackets."

"It wasn't just me. We had a few people complaining of large numbers of bees and being stung," said the neighbor, Jeffrey Townsend. "I got stung. I have nothing against the honeybee, but they were flying all over the neighborhood."

The controversy illustrates the quandary fast-growing cities face when they change from mostly rural to suburban and urban areas. Fishers' population has more than doubled to 91,000 since 2000 and is now the sixth-most-populated place in Indiana.

As a result, some agricultural activities, like raising goats, aren't as acceptable to residents living in denser environments. Conversely, residents have new inconveniences to adapt to, like street lighting, parking restrictions and noise.

Gibbs also ran into other quirks of expanding cities — boundaries that shift, governing bodies that change and ZIP codes that overlap, which can make it difficult for residents to tell who is in charge of what.

When Gibbs decided to take up beekeeping he asked the Covington Estates homeowners association if he could raise bees on his property. The association declined, citing a provision against wild animals and saying the bees were a nuisance, Gibbs said.

"They're neither," said Gibbs, an environmental technician at Purdue University in West Lafayette. "They are insects, not animals, and they keep to themselves unless provoked."

So Gibbs asked a neighbor who lived next to the subdivision if he could raise bees on his property. Jon Hunt, who had been keeping bees since 1998, agreed. Gibbs would eventually come to consider Hunt his "bee mentor."

But soon after Gibbs began tending to his hives, Townsend complained that the bees were loose and buzzing the cul-de-sacs.

"They were right at the property line, and when I walked over there I saw thousands of them," Townsend said.

Townsend took his concerns to the city, which looked into its ordinance on bees. It turned out they were no longer permitted in neighborhoods zoned residential, though at one time they were.

Fishers planning and zoning director, Tony Bagato, said when the city updated its land use code in 2005, it permitted bees only in agricultural areas, at schools and for a few other educational purposes to keep them away from densely populated areas. At the same time, the city took zoning control of Delaware Township, where Covington Estates is, and Fall Creek Township from Noblesville, which had no restrictions on bees on residential properties.

Hunt argued to the zoning appeals board that since he had been raising bees before the change he should continue to be able to raise them. He put in about 80 hours of research, combing through receipts, pictures and documents that showed he had beehives on his property since 1998.

Gibbs, for his part, gathered support, sending in "seven or eight recommendations" from beekeeper organizations around the state.

The city finally agreed to allow Gibbs to raise six beehives on Hunt's property, and the decision recently survived an appeal by Townsend. As part of the agreement, Gibbs agreed to move his bees farther from the Covington Estates property line — and Townsend's house — to decrease the likelihood that stray bees will wander into the subdivision.

Gibbs said he is generally satisfied with the compromise he reached with Fishers but expressed frustration that Fishers remains the only city in Hamilton County that doesn't allow beekeepers on residential property. 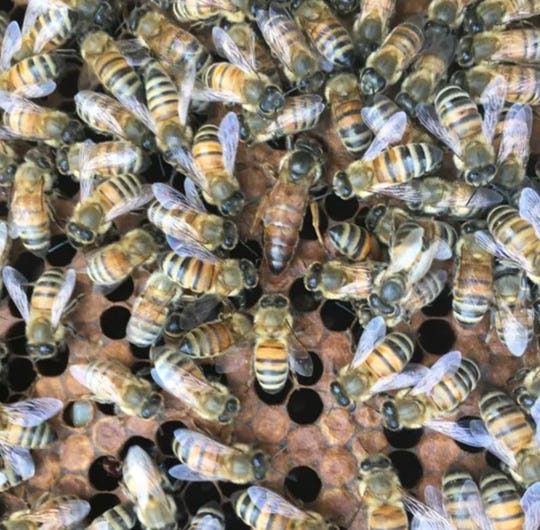 Bees pollinate one-third of our food by pollinating 80 percent of plant life and producing seeds, according to the U.S. Department of Agriculture. But they have been dying off at record rates for the past decade.

A decade ago, the main culprit was believed to be Colony Collapse Disorder, a widespread epidemic of mysterious origins. But scientists now say a parasitic mite called varroa, pesticides, loss of foraging plants and stress are largely to blame.

In response, governments and bee groups across the globe have launched awareness campaigns in schools and elsewhere.

Even fully urbanized Indianapolis allows it and is considered a leading "bee city," said Sam Dodd, 87, who has been raising bees in Hamilton County for more than 50 years.

"We went through a dispute something like this a few years ago in Indy and resolved it," Dodd said. "A rogue beekeeper was agitating his neighbors."

Dodd said bee organizations did so by swarming city meetings when Indianapolis rewrote its comprehensive development plan about four years ago. The bee enthusiasts fought to get beekeeping allowed but agreed to some restrictions to prevent the hobby from becoming a nuisance.

Indianapolis City Council member Zach Adamson, a beekeeper, said the city limits how many bees can be raised based on property size and unruly beekeepers can be fined or shut down.

But he said bees are now being raised widely by residents across the city and hives have popped up on high-rise rooftops, which provide a honey supply to some downtown restaurants. Mayor Joe Hogsett in 2016 declared Indy a "bee-friendly city."

Education is key to helping people getting over squeamishness to bees, Adamson said.

'They avoid people at all costs," he said. "You every rarely see any bee and people interactions."

Townsend said he has no problem with beekeepers who watch them closely and don't let the insects bother others. Hunt's bees were never a problem over the years, he said.

Gibbs said it wasn't his bees that were the subdivision intruders but rather yellow jackets. "I found four nests over there," Gibbs said. "It's very easy to tell. Bees leave their stingers in you when you've been bit and die. Yellow jackets don't."

Fishers planning director Bagato said there hasn't been any discussion among city council members to allow bees on residential property and Mayor Scott Fadness said the current ordinance is adequate.

"The city is supportive of bees," city spokeswoman Ashley Elrod. "They are simply permitted for open space and agricultural spaces and a few schools."

Gibbs said that stance is unfortunate.

"The mayor goes around schools telling children they can be anything they want to be when they grow up," Gibbs said. "I guess he means anything except a beekeeper."