Deal or no deal? US and Chinese sides resume trade talks

Will U.S. move on if no China trade deal in sight?

Deal or no deal? US and Chinese sides resume trade talks 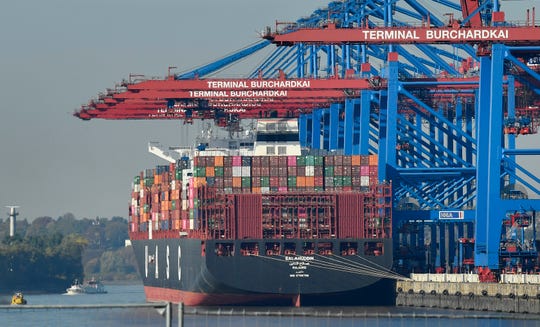 negotiators for the Trump administration should know this week or next whether they can reach a trade deal with China — or whether it's time to "move on." (Photo: Martin Meissner, AP)

WASHINGTON (AP) — Treasury Secretary Steven Mnuchin says he and other negotiators for the Trump administration should know this week or next whether they can reach a trade deal with China — or whether it's time to "move on."

Mnuchin and Trade Representative Robert Lighthizer are traveling to Beijing to resume talks Tuesday to try to end a yearlong trade war between the world's two largest economies. A Chinese team is scheduled to visit Washington next week for another round of talks.

"We hope within the next two rounds of (talks) in China and in D.C. to be at the point where we can either recommend to the president we have a deal or make a recommendation we don't," Mnuchin told Fox Business Network on Monday. "There is a strong desire for both sides to see if we can wrap this up or move on."

The two sides are locked in a standoff over the Trump administration's charges that Beijing steals technology and forces foreign companies operating in China to hand over trade secrets. China is pushing to make its companies world leaders in advanced industries like robotics and artificial intelligence.

President Donald Trump has imposed tariffs on $250 billion in Chinese imports; Beijing has retaliated by taxing $110 billion in U.S. goods.

During their previous rounds of trade talks, Mnuchin said, the two sides have "made a lot of progress," but "we still have more work to do."

The negotiators are still discussing how to ensure that Beijing would adhere to whatever commitments it makes, as well as whether the Trump administration would keep tariffs on Chinese imports to maintain leverage over Beijing. Mnuchin told Fox Business Network that an enforcement mechanism just "needs a little bit of fine tuning."

U.S. officials and businesses assert that China has failed to keep past promises concerning its trade practices.

"We are at a pivotal moment in these negotiations, with a real chance to hammer out a strong, enforceable bilateral trade agreement," said Linda Dempsey, vice president of international economic affairs at the National Association of Manufacturers.

American manufacturers, she said, "need a robust final deal to ensure they can compete on a level playing field."

Trump also wants to narrow America's huge trade deficit with China — $379 billion last year — by pressing Beijing to agree to accept more U.S. exports. But critics worry that any agreement would come at the expense of other countries that do business with China. Or that U.S. companies might receive preferential access to China and marginalize the World Trade Organization, which is meant to enforce global free trade rule for everybody.

"It clearly undermines the WTO," said Mary Lovely, a Syracuse University economist. "The two bullies in the room are basically running the show. The rest of the world is going to have to deal with the aftermath."