Visiting the mecca of the goat world in Wisconsin. 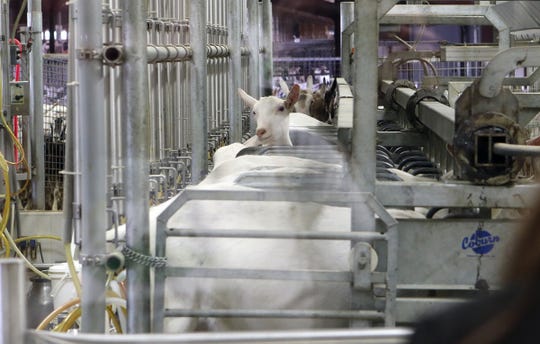 A goat is distracted during milking as a group of students from the Professional Dairy Producers of Wisconsin tour LaClare Family Creamery on April 6 as part of the Youth Leadership Derby. (Photo: Carol Spaeth-Bauer/Wisconsin State Farmer)

MALONE - Where do happy milk goats come from? Where else but Wisconsin, which leads the nation in the number of dairy goats with about 76,000 in the state, Clara Hedrich told a group of about 50 high school students as they toured LaClare Family Creamery on April 6, during the Professional Dairy Producers (PDPW) of Wisconsin Youth Leadership Derby.

Hedrich calls the area around LaClare Creamery "the mecca of the dairy goat world in the United States," with several farms in a "little circle" containing thousands of dairy goats.

Hedrich is the "Clare" part of LaClare Family Creamery, which she and her husband Larry began on a hobby farm in 1978 with two goats, a flock of chickens and two peacocks.

Now they milk about 800 goats twice a day at the farm to table operation where award-winning cheese is produced and sold, the public can watch goats being milked and enjoy "dishes prepared from scratch using locally raised, fresh ingredients whenever possible," according to the website. When weather permits visitors can relax in the Courtyard where they can get "a rare look" into the three different aging rooms.

"So this is what happens when you start out with two goats," Hedrich jokes.

With Hedrich, a high school agriculture education teacher for 38 years who grew up on a dairy farm in the northern part of Wisconsin, half of the equation in founding the creamery, the business is an advocate for agriculture.

She invited students to look at the careers available at LaClare Creamery. Four of their five children are engaged in the family enterprise that grew with each family vacation as they toured states and even Europe to learn to learn about the goat industry.

While she admits, "Our children's eyes probably still roll back in their heads," the whole objective, "was to learn about the goat industry across the United States."

Their children were required to get "an education of your choice and go work for somebody else for a minimum of two years." Four of their five children are part of the business, with one "on speed dial." From overseeing the complete farm operation, to plant manager watching over cheese making and shipping to about 29 states, to the head cheesemaker, to overseeing the retail store, cafe, as well as Facebook and graphic arts.

With 11 grandchildren and the number 12 on the way, Hedrich said, "Our goal here is really to get the next generation involved in agriculture."

Thus the reason behind the construction of a 78 x 180 kid barn facility in Chilton where nearly 900 kids can be raised for six weeks before being old enough to transfer to the next barn and eventually into the milking herd.

As the student group watched the evening milking, Hedrich explained the milking process and pointed out criteria for employees.

Bringing in 24 goats at a time, 48 total, the workers wear milking gloves, dip teats with 1 percent iodine solution before putting milking units on each goat while the does nibble at about 1.5 pounds of grain. Workers release each side after the automatic takeoff drops the units from the goats. 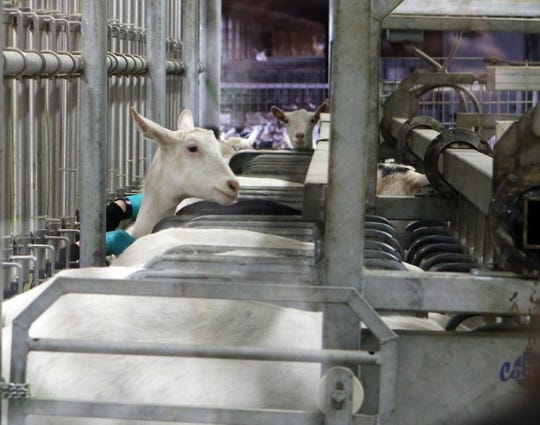 Goats are curious about the group of students watching the evening milking at LaClare Family Creamery on April 6. (Photo: Carol Spaeth-Bauer/Wisconsin State Farmer)

Hedrich described milking goats as "a middle school classroom with a substitute teacher" — perpetual motion with "somebody always doing something." If the goats get bored they will look for something to do, like chew on hoses, or drink the iodine dip or jump into the pit and wipe out all the hoses.

As each side of the parlor is released, the employee takes a long pink cane and taps the wall or the cement "to get them to mosey." Employees are instructed to stay away from the animals so people watching can clearly see what is happening.

What do they look for in an employee? Reliability. Showing up on time. Calling if they can't make it to work - calling, not texting - or better yet, finding a replacement. Following directions. Milkers have to be "pretty low key," work in sync with one another, have patience and be comfortable with people watching them while they work.

Some may think working with goats is easy. Afterall, as Hedrich explained, "a bad day in a goat barn is a black and blue arm. A bad day in a cow barn is a trip to the emergency room, but here's the challenge — labor, labor, labor."

Dairy goats give around 6 - 8 pounds of milk per day or about a gallon of milk a day.

Multiply 10 goats to one cow and there are 40 hooves to trim instead of four. Cows usually have single births, but with goats it's twins, triplets or quads unless the doe is older.

All that hard work equates to award-winning cheese at LaClare Family Creamery, with  Hedrich's daughter Katie as the head cheesemaker.

In 2011, with more than 1,600 entries for cow, goat, sheep and mixed cheese in the U.S. Cheese Championship, Evalon cheese placed first and won overall. 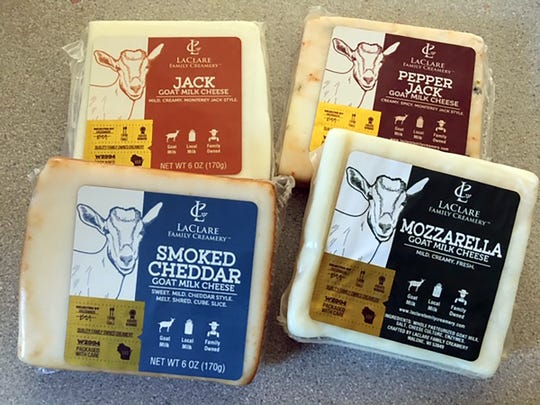 It was the second time a goat cheese ever won that contest, the second time a female won and Katie was the youngest cheesemaker to ever win the contest, Hedrich said. Katie has made the Evalon cheese in three to four different plants over the years. What she's learned as a cheesemaker is, "the easy thing is to make it once. The hard thing is to make it consistent time after time after time," Katie said in a video.

In 2015, in the World Cheese Championship, Evalon was among the top 16 cheeses out of more than 2,000 entries from 33 different countries. In 2018, Evalon received a Good Food Award and took First Place, Best of Class in the World Dairy Expo Championship Dairy Product Contest.

When people taste it and like it, "We've got them tasting goat," Hedrich pointed out.

Their Cave-aged Chandoka, ripened eight months or more, has also won numerous awards, as well as other cheeses produced on the farm.

In the agritourism business, Hedrich said they try to educate the consumer who can be confused by labels and marketing.

A Meet Your Local Farmer event on April 27 will provide a farm to table tour experience, including LaClare Family Creamery and four other local farms. Farm tours are available from 10 a.m. - 3 p.m. at each farm. LaClare Creamery will host a wine and cheese reception from 3:30 - 4:45 p.m. and a dinner at 5 p.m. for $35 per person.

A limited number of dinner tickets are available and must be purchased in advance at 920-670-0051 or by visiting https://www.laclarefamilycreamery.com/.