What could be a major breakthrough for growing corn is a long way from becoming reality on a wide scale. 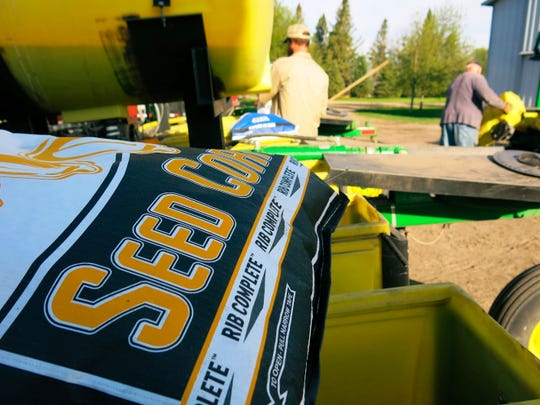 FOND DU LAC – What could be a major breakthrough for growing corn is a long way from becoming reality on a wide scale, University of Wisconsin Extension corn agronomist Joe Lauer cautioned attendees at the 2019 agronomy updates.

Lauer was referring to the southern Mexico research project, which includes UW representatives, on self-nodulating corn that grows vigorously on nitrogen depleted soils. Nitrogen, often at rates of more than 100 pounds per acre, is needed for productive growth of commercial corn, he noted.

“It's very unique. I wouldn't have expected it,” Lauer said of the southern Mexico native corn that has 8 to 10 large brace roots which have nodules that fix nitrogen from the air to nourish the corn plant. “Only legumes were previously known to be able to do this.”

The ancient trait of that corn, which grows to heights of 16 feet, provides 29 to 82 percent of a corn plant's nitrogen needs, Lauer pointed out. Aerial roots containing mucilage (a colony of sugars) enable bacterial activity which draws the nitrogen from the air and supplies it to the plant, he explained.

A published report on this discovery in the latter half of 2018 stirred some excitement but “I'm here to temper this down,” Lauer remarked. “It's a long time before this could be commercialized. The commercial seed companies are not jumping on this. It would be a challenge to grow this corn outside of the tropics.”

Lauer said that a request for a patent on the nitrogen fixing trait was denied. An idea of applying a similar trait to wheat has also been proposed, he added.

But there are also times when researchers and trial plot managers enjoy a pleasant surprise, Lauer observed. That happened in 2018 with the outbreak of tar spot disease in the Extension Service's corn trial plot near Montfort in southwest Wisconsin, he reported.

The year's research plan had not anticipated anything of the sort but it proved to be quite valuable in tabulating the differences between in the effect on yields in that plot, Lauer reported. At 45 to 50 percent of the leaves being infected, the yield losses on the later season hybrids were as high as 40 to 60 bushels per acre, he reported.

What was unique at that site was that no other leaf diseases were present, allowing for a very direct correlation between the infestation and effect on yields, Lauer pointed out. What was lacking, however, was information on the base genetics of the hybrids, which would indicate how they are related and if the level of infestation and yield losses were due to that relationship, he said. “I wish I knew that.”

In planned research, which will be conducted for the last time in 2019, the value of banded fertilizer placements has been studied for more than 20 years with “mixed results” being found with the practice, Lauer reported. At the Arlington plots, he found it's a bit safer to go with the placed starter fertilizer than with putting the fertilizer on the corn seed.

At 11 plot sites around the state in 2017 and 2018, the research focused on any correlation between the starter fertilizer practices and the maturity ratings of the corn hybrids, Lauer pointed out. Only 5 of the 22 comparisons showed much interaction in terms of yield, he said.

Lauer's overall conclusion on the banded fertilizer question is that “not much difference” is likely to occur. He suggested that the best benefit is likely with the late planting of full season hybrids.

On what to do on the banded fertilizer question, Lauer said it rests within “the art of farming,” meaning that farmers should make their own “independent decision.” For the anticipated last year of formal research on the topic, he invites corn growers to contact him to discuss setting up comparative strips – a project for which the Wisconsin Corn Growers Association is offering honoraria.

Of particular concern to corn growers and dairy farmers who contract to buy corn for silage, Lauer suggested that an updating could be due in the formula on how many bushels of grain there are in a ton of corn silage. While noting that per acre grain and silage yields are increasing, he questioned the accuracy of some of the reported statistics.

The U.S. Department of Agriculture compiles yield estimates from a combination of 600 visited sites plus grower post card returns, Lauer indicated. He believes that the post card numbers might be skewing the data.

For instance, the USDA report indicates a .23 ton annual average increase in corn yield per acre over the past 23 years while the Extension Service's trial plots at 11 sites put that yearly average at only .1 ton, Lauer reported. For grain yields, the average annual increase in Wisconsin is about two bushels per acre, he added.

Regarding the amount of grain in corn silage, Lauer believes the standard use of 7 bushels of grain per ton is a bit outdated. He believes it is closer to 8 bushels instead for corn that would yield at least 150 bushels of grain per acre and that the portion of grain, or starch, in the silage compared to the stover has not changed – the only change being the per acre yields.

Lauer also reported on the “kitchen sink” corn research project which has been conducted on 20 acres at Arlington for 18 years. At the site, which he conceded could be considered “an environmental wreck,” very high inputs are combined with corn populations of up to 45,000 plants per acre for the harvest of both corn grain and corn silage.

While some of the variables result in little or no difference on yields, a couple which are noticeable are the link between tillage practices and transgenic corn traits, Lauer observed. He said the smart stack hybrids (multiple transgenic traits) suffer yield losses when compared to a single trait hybrid (Roundup Ready) when conventional tillage has not taken place and that tillage is not as crucial with a corn/soybean rotation as it is with continuous corn.