Blue Card: Path to legalization and glimmer of hope for ag labor challenges?

Some farmers say labor shortage may put them out of business.

Blue Card: Path to legalization and glimmer of hope for ag labor challenges? 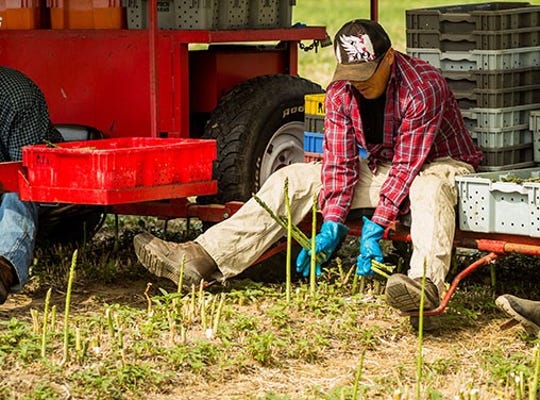 WASHINGTON, D.C. – Despite unsuccessful Congressional efforts last year to secure passage of a revised guestworker program known as H-2C, there may be an opportunity in newly introduced legislation that would provide “a path to legalization” for undocumented agricultural workers that are already here.

“Rep Lofgren is from California. She knows the issue on agricultural labor because California is the largest employer of agricultural workers in the country,” Schlegel said. “Both she and her staff have told us point-blank they want to deal with it; they want to see if they can get something done.”

According to Schlegel, Rep. Lofgren’s bill would create a path to legalization through a “Blue Card” for agriculture workers currently working with falsified documentation. Even though AFBF has not taken a formal position on the legislation, Schlegel acknowledges it would address a major concern regarding a legal ag labor workforce.

The Blue Card legislation, while a step in the right direction, does not address improvements to H-2A or a new visa guestworker program, according to Schlegel. Considered an AFBF policy priority, revisions are needed to provide a future flow of legal agricultural workers for both seasonal and year-round positions.

“What we have not yet seen is a proposal that would give us a broad agricultural guestworker program that covers all of agriculture, such as dairy and livestock, but there are discussions behind the scenes going on, so we're cautiously optimistic that we're seeing some movement,” he said.

Schlegel said there are preliminary discussions to attempt revisions through an appropriations bill to extend H-2A to non-seasonal jobs.

“We know that the Trump administration is working on a regulatory proposal on H-2A, and we expect that to come out in the near future,” Schlegel said. “But we also know (the Trump Administration) cannot extend the program to year-round. They need a law by Congress to do that — that's why we have to press Congress to act.”

Adverse Effect Wage Rate (AEWR) is another potential choke-point for agricultural guest-workers, according to Schlegel, noting 47 out of 50 states have experienced an increase in the last 12 months — some with double-digit increases.

“It’s becoming very onerous for a number of farmers right now. Some are saying that if it goes on like this much longer, they just simply can't stay in business,” Schlegel said. “So as we talk about these issues of a guest-worker program revision, the AEWR is a very important part of it.”

Even though the minimum wage will increase to $9.45 per hour in Michigan, the AEWR for Michigan farmers using H-2A in 2019 will pay a minimum of $13.54 per hour this year.

Schlegel encouraged members to enlist the support of Sen. Debbie Stabenow, saying she could play a vital role in immigration reform which would have a direct impact on Michigan’s labor-dependent agriculture.

“If Senator Stabenow is inclined, she is someone who could be very helpful,” Schlegel said, given her role on the U.S. Senate Ag Committee. “If we can get the senator engaged and supportive that would be a big plus for agriculture.”

Celebrating 100 years as the voice of agriculture in Michigan in 2019, Michigan Farm Bureau grows Michigan through advocacy and leadership development.