The barns are all empty, the cow yard is too.

No longer the bellow or the long drawn out moo.

We're moving to Kansas the heifers did say,

where we can be raised for a little less pay.

There was a time not long ago,

when dairy farming was the way to go.

Seven farm families were working on our 2-mile road.

As of today, every cow has been sold.

Farming is changing, as most around us can see.

Our view of farming is now animal free.

Our operation has changed over the years this is true.

But we still take great pride in everything we do.

We're still taking on the challenges at hand.

Mother Nature now dictates, only she makes the call,

when to plant in the spring, when to harvest in fall.

Being a farmer, no matter the kind,

We raised our kids farming, to me there's no better way.

And a proud farmer I'll be, at the end of each day.

For years, the barns at Stodola Farms in Kewaunee County were filled with the sounds and smells of animals.

Dennis Stodola purchased the family operation from his father back in 1992 and together he and wife, Kay, operated a 100-head dairy farm operation, milking three times a day. 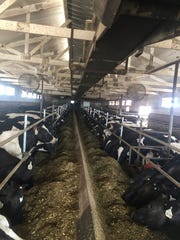 Custom-raised heifers belly up to the bunk to feed at Stodola Farms in Kewaunee. (Photo: Kay Stodola)

"We had one of the top herd averages in the state," said Kay, referring to the official DHIA test results.

At that time, the couple began renting more land, diversifying the operation with income from cash grain crops.

In 2004, the Stodolas made the decision to sell the productive herd of Holsteins to a young farmer in Darlington, Wis.

"We decided to get heavier into cash grain farming as well as custom raising between 400-500 head of dairy replacement heifers for local farmers," Kay said. "The heifers were a great way for us to stay diversified."

That appeared to be a profitable business model for the family until the last few years when a downturn in the ag economy forced dairy farmers to look for ways to cut expenses.

"It was actually cheaper for dairy farmers to send the heifers out of state to have them raised or to sell them and simply buy replacement heifers," Kay pointed out. "Rates are cheaper in Kansas and other warm climate states because the heifers are raised on large feed lots. Therefore, they don't have building expenses or large electric bills."

Kay said the family had planned on raising heifers for another 10 years or so. 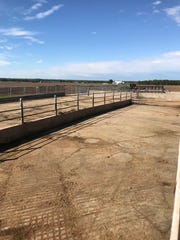 The cow yard that once held the Stodola family's milking herd and later custom-raised heifers is clean and quiet without the presence of animals. (Photo: Kay Stodola)

"But we simply can't compete with Kansas prices," she said. "There's just no money to be made in them anymore. Dairy farming seems to be moving in the same direction as hogs and chickens—get big or get out."

After the heifers were loaded onto trailers and the inside of the barns pressure washed, Stodola posted an original poem on the farm's Facebook page, drawing responses from farmers and non-farmers from across the country.

Helen Meserve grew up on a farm in Indiana and shared that her old family farm grew a variety of grain crops and vegetables, and raised an assortment of farm animals.

"It took three generations of family working together to keep it up, but it was a beautiful farm; you worked hard and were proud of the results," she said. "I went back there years later,while the white house and barn were still beautiful, there were no animals. It just wasn't the same."

"We just sold our herd," said Gayle Stuart. "The large dairies are really hurting the small farms over here."

"Nevermind that the family farms trying to make a living on pennies every month," Tucker said. "Most consumers don't even know about us."

Others commiserated with the Stodola family for the loss of their custom-heifer raising operation.

"No matter what, once a farmer, always a farmer. It's ground into a soul like the dirt in the crevices and calluses of our hands," posted Charlotte Glenna of Amery Wis,

Others have also walked in the same shoes as many farmers today who are forced to sell their herds.

"The worst part is when the cows left. It gets better. Slowly," shared attorney Jerri Lynn Cook. 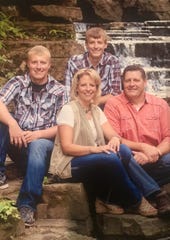 Sons Austin (left) and Connor made the decision to stay and help run the family-owned and operated farm with their parents Dennis and Kay Stodola in Kewaunee. (Photo: Elizabeth Valenta)

While the barns stand tidy, empty and silent nowadays, the Stodolas have pressed on in the ag industry, albeit without livestock.

"We're currently cash grain farming about 4,000 acres of land along with our two sons, Austin, 21, and Connor, 18," she said. "It's a different way of farming but one that our family absolutely loves."