Teens' barn legislation is a years-long lesson in lawmaking

Student project inspired by century-old barn will be signed into law next month.

Teens' barn legislation is a years-long lesson in lawmaking 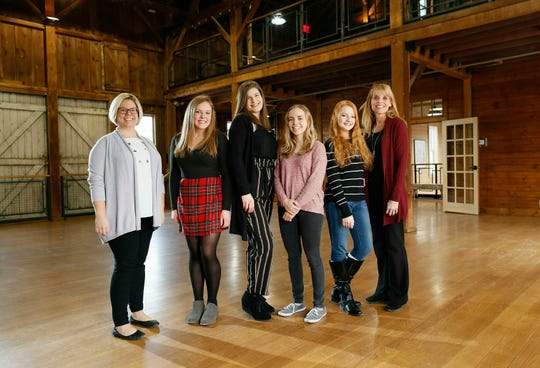 But to the four teens who first proposed a bill to Ohio lawmakers in 2014 that will finally become law in March, it's much more than a school assignment. What started as a middle-school learning experience has evolved into a passion for preserving Ohio history, the girls say.

The bill designates the barn as Ohio's official historical architectural structure, recognizing the buildings that have housed everything from schoolchildren to farm equipment, crops and animals since the pioneer days.

Though introduced on its own, the state designation eventually was rolled into Senate Bill 86, a lengthy measure that includes other recognitions, such as dubbing the second week of October "Ohio Covered Bridge Week" and declaring that a shelter pet is the state's official pet.

It was a long road, filled with hours of research, testimony and advocacy, especially after the proposal stalled in the Ohio Senate.

But the students say the experience, though frustrating at times, taught them more about politics than they could ever learn from a textbook.

"We grew up with this bill, really," said 17-year-old junior Anna Borders. "There were a lot of hiccups and obstacles along the way, but even that taught us about perseverance and sticking to our guns."

It all started when Caley Nestor Baker, a social studies teacher, and Debbie Pellington, a coordinator of gifted services, took seventh-graders on a field trip to the Ohio Statehouse. There, they offered proposals for a new state symbol to former Rep. Anne Gonzales, R-Westerville, who organized the event as a way to engage young people in politics, she said.

Gonzales selected their proposal and introduced it to the House in 2017.

The Everal Barn will now be known as the official historical architectural structure of Ohio, thanks to the perseverance of students. (Photo: Adam Cairns,/AP)

Senate Bill 86, in its final form, was first introduced by Bob Hackett, R-London, chairman of the Senate's agriculture committee, who helped give it its final push.

The students' proposal was inspired by the Everal Barn, a restored Westerville structure on the National Register of Historic Places that's used as an event space, as well as the state's 2003 bicentennial celebration, when an artist painted murals on one barn in each of Ohio's 88 counties.

Barns are an important part of Ohio history, and because of the diversity of Ohio's European settlers, the state boasts a variety of barn styles, each with a story, said Dan Troth, vice president of Friends of Ohio Barns, a nonprofit group and bill proponent.

For example, a 16-sided barn in Freeport, an eastern Ohio village, was designed by George Washington to keep horses warm and is one of only three left in the country. Mail Pouch barns, painted with 1920s ads for chewing tobacco, still span the Ohio Valley.

But today, many historic barns face the threat of demolition, Troth said.

Even structures in pristine shape are frequently dismantled for their wood, which is turned into flooring, ceiling beams and furniture, he said.

Though they initially faced pressure to streamline their proposal, the students stood by their choice to recognize all barns, rather than one specific type, to be inclusive of all of Ohio's past, they said.

"We're excited about the mark we've left on Ohio's code," Thompson said. "Now, groups like Friends of Ohio Barns and the Ohio History Connection will have something to point to when they're working to preserve Ohio's history."