Producers of certain commodities will now be eligible to receive payments for the second half of their 2018 production. 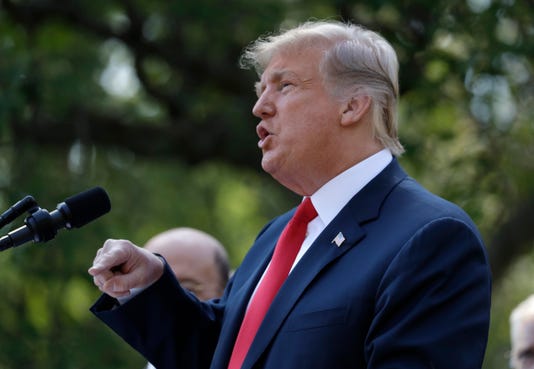 Saying he is making good on his promise to "defend our farmers and ranchers from unjustified trade retaliation by foreign nations," President Donald Trump authorized the second and final round of trade mitigation payments.

Producers of certain commodities will now be eligible to receive Market Facilitation Program (MFP) payments for the second half of their 2018 production.

Just last week, the second round of payments was put on hold "until further notice" because of "concern about the cost of the program in hopes that trade issues will China will be resolved quickly."

"Our economy is stronger than ever,"Trump said in a tweet on Dec. 17, "we stand with our farmers."

The MFP, launched in September, is a short-term relief strategy to help protect agricultural producers while the Administration works on free, fair, and reciprocal trade deals to open more markets to help American farmers compete globally, according to a U.S. Department of Agriculture press release.

“The President reaffirmed his support for American farmers and ranchers and made good on his promise, authorizing the second round of payments to be made in short order. While there have been positive movements on the trade front, American farmers are continuing to experience losses due to unjustified trade retaliation by foreign nations," said Perdue in the press release. "This assistance will help with short-term cash flow issues as we move into the new year.”

Producers need only sign-up once for the MFP to be eligible for the first and second payments. The MFP sign-up period opened in September and runs through Jan. 15, 2019, with information and instructions provided at www.farmers.gov/mfp.  Producers must complete an application by Jan. 15, 2019 but have until May 1, 2019 to certify their 2018 production.

The MFP provides payments to almond, cotton, corn, dairy, hog, sorghum, soybean, fresh sweet cherry, and wheat producers who have been significantly impacted by actions of foreign governments resulting in the loss of traditional exports. The MFP is established under the statutory authority of the Commodity Credit Corporation CCC Charter Act and is under the administration of USDA’s FSA. Eligible producers should apply after harvest is complete, as payments will only be issued once production is reported.

For farmers who have already applied, completed harvest, and certified their 2018 production, a second payment will be issued on the remaining 50 percent of the producer’s total production, multiplied by the MFP rate for the specific commodity.

MFP assists some, disappoints others

While the American Farm Bureau Federation (AFBF) welcomed the second assistance package, urging the pursuit of lasting relief, the National Corn Growers Association (NCGA) was disappointed with the lack of relief for corn farmers.

“This latest trade mitigation package announcement will help our farmers and ranchers weather the continuing trade storm. We continue to feel price pressure and very real economic damage due to the trade actions other nations have taken against our U.S. farm exports," said American Farm Bureau President Zippy Duvall. " While this assistance package will help a number of our farm families during this year of severe economic challenge, the best way to provide lasting relief is to continue pushing for trade and tariff reform from trading partners like China, Canada, Mexico, India, Turkey and the European Union.”

In a press release the NCGA said corn farmers would receive virtually no relief through the MFP, despite the fact that corn farmers have suffered an average 44 cents per bushel loss since tariffs were first announced.

"Farmers of all crops have felt the impact of trade tariffs," said NCGA President Lynn Chrisp. "NCGA appreciates the progress the administration has made to advance ethanol, reach a new agreement with Mexico and Canada and move forward on negotiations with Japan, but the benefits of these efforts will take time to materialize and farmers are hurting now."

"One cent per bushel is woefully inadequate to even begin to cover the losses being felt by corn farmers. USDA did not take into account the reality that many of our farmers are facing," Chrisp added.

Soybean farmers were thankful of the announcement of the second round of payments, but FarmFirst Dairy Cooperative said it's not enough, the retaliatory tariffs need to be lifted.

“FarmFirst Dairy Cooperative was hopeful that the administration would heed our concerns for these trade mitigation payments to more accurately reflect the costs dairy farmers are experiencing due to this trade war. However, we acknowledge their effort to help offset these losses," said Jeff Lyon, FarmFirst Dairy General Manager. "With the anticipated passage of the 2018 Farm Bill, we are confident we are headed into the right direction to make some meaningful reforms that will positively impact dairy farmers for 2019.”

American Soybean Association (ASA) president Davie Stephens, a soybean producer from Clinton, Kentucky, said, “Soy growers are very thankful that President Trump understands the need for this payment on the full 2018 production and that the Administration will deliver the second half of the aid as promised. While it will not make our losses whole, it will certainly help offset the drop in prices we have experienced since China cut off U.S. soybean imports. We saw some initial sales of U.S. soybeans to China last week, which was also welcomed news and we hope a sign that the trade war could be turning a corner as a result of President Trump’s recent meeting with President Xi.”

ASA continues to advocate for a negotiated solution to the trade war that would result in China rescinding the 25 percent tariff and fully opening its market to commercial purchases of U.S. soybeans, according to a press release.

“The sooner the market opens and tariffs are rescinded, the sooner we can start to rebuild the exports we have lost this year,” said Stephens.