When the Dust Bowl hit Sheboygan

When the Dust Bowl hit Sheboygan 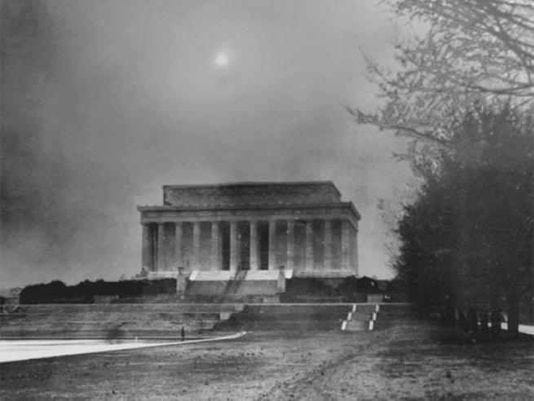 Nicholas and Anna Zillner Conrardy of Sheboygan had a honeymoon for the history books. A June 1935 Sheboygan Press article reported the couple had just returned from a month-long wedding trip punctuated with blizzards, dust storms, floods and washouts.

Mr. Conrardy took dozens of images of roiling clouds of dust, ferocious floods and cattle falling dead by the hundreds. The newlyweds drove from one extreme to another. Out of a dust storm and into a cloudburst. Out of a cloudburst, only to be caught in a blizzard. The Conrardys just experienced the wild weather of the 1930s full force.

Eighty three years ago, on Black Sunday, April 14, 1935, parts of the United States faced a seeming Armageddon. The day dawned bright and clear on the Great Plains, a perfect morning. Within hours, the sky turned an ominous purple as temperatures dropped and the wind picked up. The largest dust cloud yet shot down from the Dakotas all the way to Texas turning the sky darker than night. More dirt was moved in that one day, in that one storm, than was excavated during the 10 years of construction of the Panama Canal. This was the event that prompted a Lubbock report to coin the term “Dust Bowl".

All of America was in the midst of the Great Depression, and to add insult to injury, huge swaths of the country suffered through years of drought, heat waves and dust storms.

During the 1910s and 1920s the southern Plains was the final frontier of agriculture. World War I, a series of unusually wet years, and generous federal farm policies created a land boom. Farmers plowed up 5.2 million acres of ancient grasslands. This created cash rich wheat fields — in good financial times when there was plenty of rain.

But when the Great Depression hit, wheat prices collapsed. To make matters worse, it essentially stopped raining in 1931, beginning a drought that would last for the rest of the decade. With no rain, the wheat died. Lacking the deep root systems of prairie grass as an anchor, the topsoil was picked up and swirled into dense black blizzards.

For eight years, the dust blew out of the Dust Bowl of the southern plains. The simplest of acts — breathing, doing laundry, sleeping — were no longer simple. 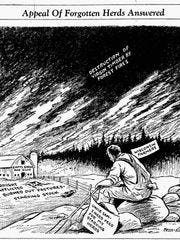 According to one federal agency, which counted only the largest of these storms, 14 hit in 1932, followed by 38 in 1933. Once rare, they became commonplace.

Static charges in the air shorted-out automobiles on the road — men avoided shaking hands for fear of shocks that could knock a person to the ground. Huge drifts of dirt buried pastures and barnyards, piled up in front of homesteaders' doors, came in through window cracks and sifted down from ceilings. There was no way to escape it.

In 1934, the single worst year of the drought, 75 percent of the country saw the effects of dust storms with severe storms dropping red snow as far east as Boston.

Folksinger Woody Guthrie, just 22 at the time, rode out the storm in Pampa, Texas. Fearing the end might be near as “you couldn’t see your hand before your face,” he composed the song, “So Long, It’s Been Good to Know Yuh.”

Wisconsin was the recipient of some of that much-traveled prairie soil. In March 1931, Madison reported near twilight conditions at noon. As a light rain fell, dust created muddy rivulets everywhere.

On the morning of May 10, 1934, a dust analyst in the Kohler engineering department found the air to have 30 times the normal dust particles. By noon of that same day, the count had risen to 5,000,000 parts per cubic foot, nearly double the first test.

That same day at Deland Park, the beach sand was covered in an inch of yellowish, dust blown in from the west. 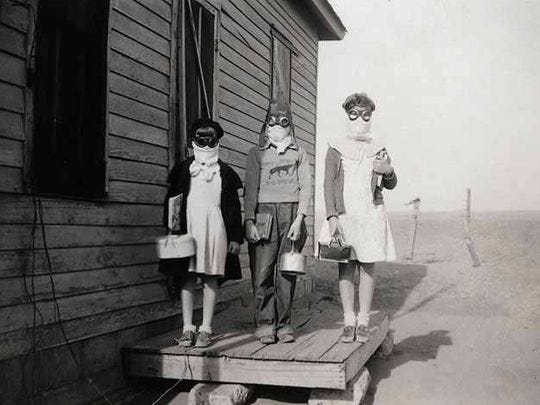 Children attired in goggles and homemade masks in order to avoid the dust of the 1930s. (Photo: Courtesy of Sheboygan County Historical Research Center)

Several factors brought the Dust Bowl era to a close. Mother Nature finally switched out the drought cycle of the 1930s, generating desperately need rainfall in the area. The United States government engaged in an aggressive campaign to educate farmers in more sustainable growing practices. Techniques such as planting trees and grasses were helpful in anchoring the soil. And finally, by 1940, more than 2.5 million people or 60 percent of the population had fled from the regions affected. Over-cultivation ceased.

Old-timers reminisce, “Everybody remembered where they were on Black Sunday. For people on the Southern Plains, it was one of those defining experiences, like Pearl Harbor or Kennedy’s assassination.”

One can imagine, so too, for the Conrardys.