Ruth was named Senior Champion Female and Total Performance Winner before going on to be named Grand Champion of the Ayrshire Show for the second year. 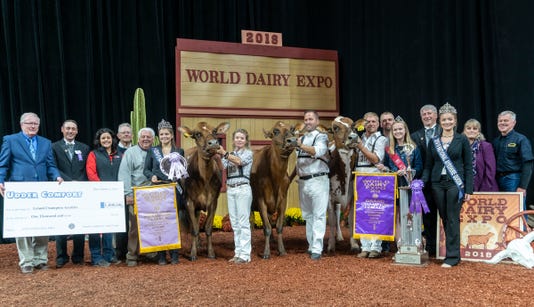 Palmyra Berkley P Ruth -ET took home three titles at the 2018 International Ayrshire Show. The winning Four-Year-Old Cow was named Senior Champion Female and Total Performance Winner before going on to be named Grand Champion of the Ayrshire Show for the second year.

KnH-Endres Burdette Mayhem was the winning Summer Yearling and Junior Champion of the International Ayrshire Show. Mayhem is owned by Leslie and Linda Bruchey of Westminst, Md. Glamourview-Lager and Walton are the owners of the winning Fall Heifer calf and Reserve Junior Champion, Jomill Burdette Kalliope.

Complete class results can be found at worlddairyexpo.com.