Teachers are striking again; in Tacoma, they gained another victory

Teachers in Tacoma won raises after a weeklong strike. In Los Angeles, the country's second-largest school district, teachers could walk out next month

Teachers are striking again; in Tacoma, they gained another victory 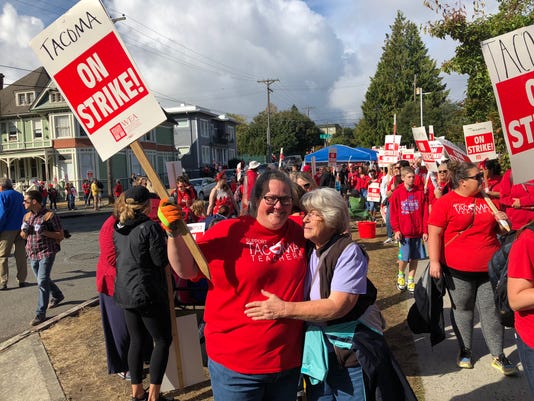 TACOMA, Wash. – Anne Hawkins prided herself on teaching students at Jason Lee Middle School to stand up for themselves. In almost two decades as a language arts educator, she’s implored the youth in her school to call out inequality.

So instead of reporting to her classroom the way she has every September for 19 years, Hawkins walked the picket line last week with more than 2,000 of her fellow teachers. Striking for better pay, teachers from Tacoma Public Schools were joined by hundreds of parents and students who supported the walkout. They circled the district administration building as Aretha Franklin’s “Respect” and “Revolution” by The Beatles played on loop.

“If any students asked me what I was doing, the answer would be simple,” Hawkins said. “I would say, ‘I’m doing the thing we talk about and practice every day in class.’ ”

The week of protests got results – a 14.4 percent pay bump, and another victory for teachers, as strikes continue to rock the education world. Supported by parents and community members, educators’ efforts are gaining momentum.

Across the country, teachers want higher salaries. They're fed up with paying for school supplies out of their own pocket and working extra hours.

March 30: Teachers are striking all over. What is going on?

Unrest from educators has persisted this year. About a dozen districts in Washington missed their back-to-school dates because of teacher strikes, the state teachers' union said.

In Los Angeles, teachers at the nation’s second-largest school district voted to strike if negotiators can’t reach an agreement. A walkout could come as soon as next month.

In Tacoma, an hour's drive south of Seattle, teachers were prepared to picket all of September, keeping the district's 30,000 students out of class. 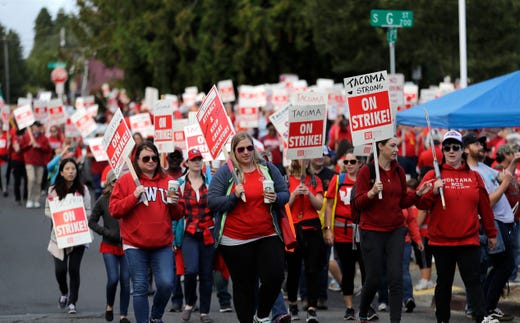 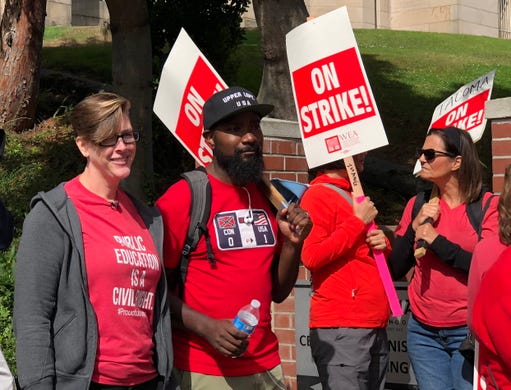 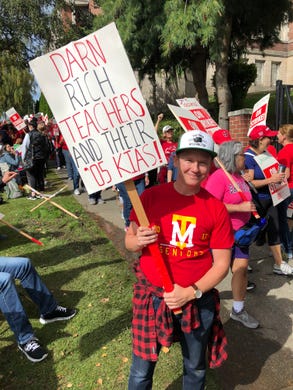 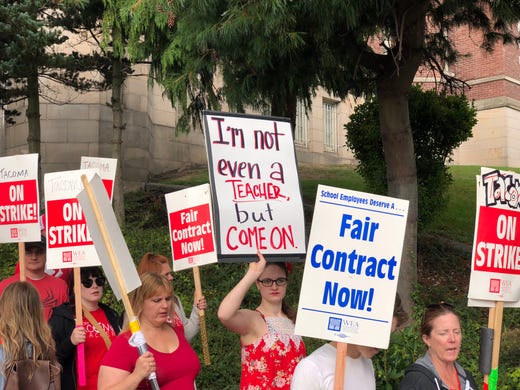 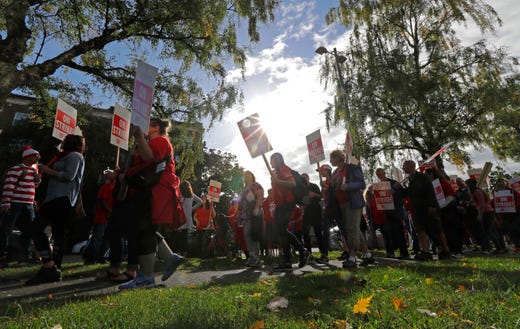 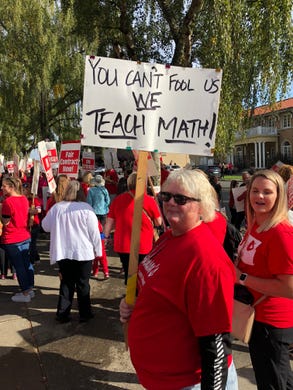 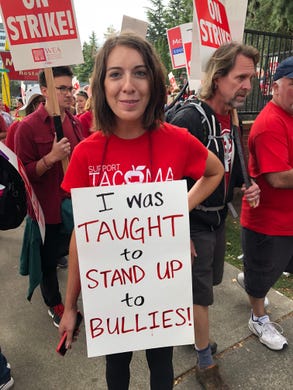 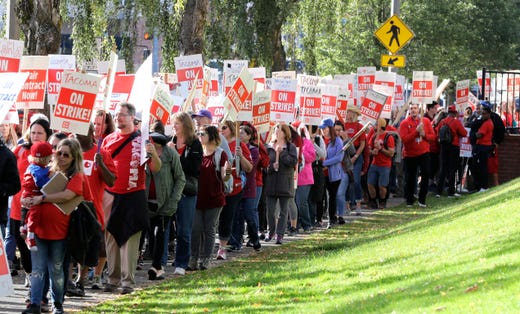 Megan Holyoke, a first-year teacher whose career kickoff was delayed by the strike, explained it like this: “Teachers have the patience of saints. We will wait this out.”

Strikes in other parts of the country were "catalyzing" for Tacoma teachers, said Nate Bowling, a teacher at Lincoln High School.

He pointed to a renewed spirit of protest across the USA in the wake of President Donald Trump’s election two years ago. People everywhere have hit their breaking point when it comes to a lack of appreciation and money for what teachers do, Bowling said. In this political moment, grabbing a sign and joining a march is not only acceptable but encouraged.

Teachers say they could drive 10 minutes and earn more money

In Tacoma, teachers protested what they called a misappropriation of money the school district received after a landmark state Supreme Court case.

The Washington Supreme Court ruled in 2012 the state wasn’t spending enough to cover basic education costs. Justices ordered legislators to fix that by the start of this school year.

Many Washington schools directed the millions they received to sizable pay increases. Not Tacoma. Administrators said they needed the money to fill upcoming budget holes.

Educators protested they could drive 10 minutes from their school and get a $10,000 raise. They were particularly rankled by the salary of Tacoma Superintendent Carla Santorno ($291,000 in 2017-18) compared with that of Washington Gov. Jay Inslee ($177,107).

Parents and taxpayers backed the educators. When the school district posted on Facebook it would be closed last week, it received hundreds of comments in response – many of them angry parents, siding with teachers.

“My daughter needs to be in school! She wants to be at school,” commented Leonette Hall, whose youngest daughter is a 10th-grader in the district. “You need to pay these teachers what they deserve! Your games are hurting these kids, parents and teachers.”

“I’m struggling,” chimed in Alexandria Lynne, a senior at Mount Tahoma High. “You’re messing up my whole entire life plan going on. Can you guys suck it up and just pay them the right amount already please?”

As the week wore on, it became clear public support for teachers wasn’t decreasing. The district caved.

The tension with administrators took its toll.

“There are dozens of administrators working downtown who never see, smell or hear a child, who are making hundreds of thousands of dollars,” said Hawkins, the language arts teacher. “They’re not educating anyone.”

Hawkins had had enough. Tears filling her eyes, she handed a piece of paper to her mother, Lynn Barksdale, herself a former teacher. Barksdale crossed the picket line, walked into the Tacoma Public Schools office and handed over Hawkins’ resignation.

“I never thought in a million years that this day would come … but I cannot do this anymore.”

The new contract, with its pay raises, doesn’t change anything for Hawkins. She still plans to leave the district, and she’ll be released from her contract as soon as the school can fill her position.

“I’m done,” she said late Thursday night. The school, she said, still hadn’t given a satisfactory answer to her most pressing question: Why did teachers have to fight so hard for respect in the first place?