An impasse in four days of trade negotiations with Canada couldn't be broken, but Trump plans to sign agreement with Mexico. 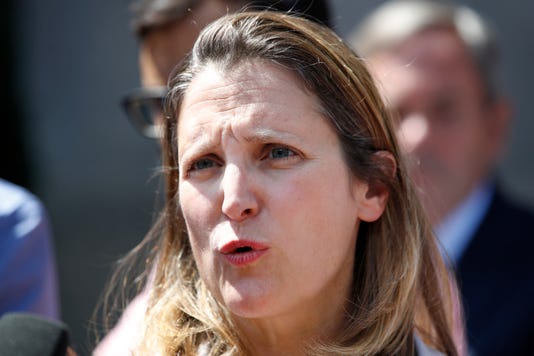 Canada's Foreign Affairs Minister Chrystia Freeland speaks to the media during a break in trade talk negotiations at the Office of the United States Trade Representative, Thursday, Aug. 30, 2018, in Washington.(Photo: Jacquelyn Martin, AP)

WASHINGTON - Talks to keep Canada in a North American trade bloc broke up Friday and will resume next week with the two longtime allies divided over such issues as Canada's dairy market and U.S. efforts to shield drug companies from generic competition.

President Donald Trump notified Congress on  Friday that he plans to sign an agreement in 90 days with Mexico to replace the North American Free Trade Agreement  — and hopes Canada can brought on board, too.

The U.S. and Mexico reached a deal on Monday that excluded Canada, the third NAFTA country. The top Canadian trade envoy, Foreign Affairs Minister Chrystia Freeland, then hurried to Washington for talks aimed at preserving Canada's membership in the regional trade agreement. 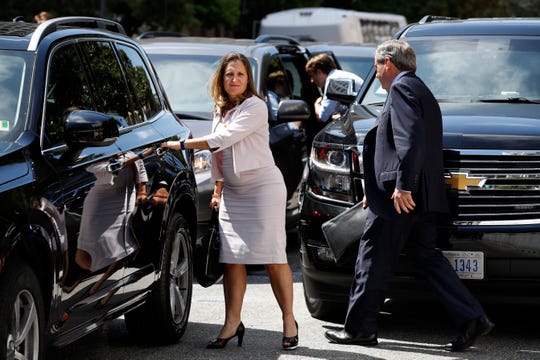 Canada's Foreign Affairs Minister Chrystia Freeland, left, walks to a car during a break in trade talk negotiations from the Office of the United States Trade Representative, Thursday, Aug. 30, 2018, in Washington. At right is David MacNaughton, Canada's Ambassador to the United States. (Photo: Jacquelyn Martin, AP)

The negotiations took an odd turn for the worse Friday over news that President Donald Trump had told Bloomberg News that he wasn't willing to make any concessions to Canada. Trump wanted the remarks to remain off-the-record; otherwise, the president said, "it's going to be so insulting they're not going to be able to make a deal."

The comments were leaked to the Toronto Star, and on Friday afternoon, Trump took to Twitter to angrily confirm the Star's report:

"Wow, I made OFF THE RECORD COMMENTS to Bloomberg concerning Canada, and this powerful understanding was BLATANTLY VIOLATED. Oh well, just more dishonest reporting. I am used to it. At least Canada knows where I stand!"

Freeland tried to brush off the controversy in a news conference. "My negotiating counterparty is Ambassador Lighthizer," she said. "He has brought good faith and good will to the table."

"It is Trump's bluster at best, but obviously he is not going to force anyone into a bad deal," said Jerry Dias, president of the Canadian private-sector union Unifor. "It is clear the U.S. economy is much bigger than ours, but trying to embarrass the Canadian team, trying to insult Canadians, is not going to get him anywhere."

Freeland expressed confidence that Canada could reach a deal with the United States on a revamped trade accord that could please all sides.

"We know a win-win-win agreement is within reach," she said.

Trump has charged that the deal wiped out American factory jobs. He has vowed to negotiate a better deal — or withdraw from NAFTA altogether. Talks on a new trade deal started a year ago but bogged down over U.S. demands, including several meant to bring manufacturing back to the United States.

A few weeks ago, the United States began negotiating with Mexico, leaving Canada on the sidelines. Outgoing Mexican President Enrique Pena Nieto wanted to sign a deal before he left office Dec. 1. The deal announced Monday would, among many other things, require that 40 percent to 45 percent of a car be made in a North American country where auto workers made at least $16 an hour — that is, not in Mexico — before qualifying for duty-free status.

Canada doesn't have much of an objection to the auto provisions of the U.S.-Mexican deal, which would benefit Canadian workers too. Ottawa does have other complaints.  Neither U.S. nor Canadian negotiators are talking publicly about the issues that divide them.

But Daniel Ujczo, a trade attorney of the law firm Dickinson Wright  in Columbus, Ohio, and others say the flashpoints include trade barriers that protect Canadian dairy farmers and Ottawa's insistence on NAFTA provisions for resolving disputes.

Also nettlesome is a provision in the U.S.-Mexico deal that shields U.S. makers of biologics — ultra-expensive drugs produced in living cells — from generic competition for 10 years instead of the eight Canada is willing to live with: The Canadians fear the protection will drive up drug prices and make its government health care system more costly.

The Trump administration had insisted that it wanted a deal by Friday, beginning a 90-day countdown that would let Mexico's Nieto sign the pact before leaving office.

But under U.S. trade rules, the U.S. team doesn't have to make public the text of the revamped agreement for 30 additional days, buying more time to reach a deal with the Canadians. Lighthizer's statement Friday said Trump intends to sign a new trade deal with Mexico, whether or not Canada is part of it.

When the Trump administration notified Congress last year that it intended to renegotiate NAFTA, critics note, it said it would enter talks with both Canada and Mexico. It's unclear whether the Trump team even has authority to reach a pact with just one of those countries. And Congress, which has to approve any NAFTA rewrite, might refuse to endorse a deal that excludes Canada.

Even while gripped in negotiations with Mexico and now Canada over a new North American trade pact, the administration has been fighting major trading partners on other fronts. The president has imposed wide-ranging tariffs that, he argues, will help protect American workers and force U.S. trading partners to stop exploiting trade deals that are unfair to the United States.

Since March, for example, Trump's team has applied new tariffs of up to 25 percent on nearly $85 billion worth of steel and aluminum on the grounds that these imports pose a threat to America's national security.

The administration has also applied taxes to $50 billion in Chinese products, mostly goods used in manufacturing. And it's considering slapping tariffs of up to 25 percent on an additional $200 billion in Chinese imports after a public comment period ends Thursday. Unlike the previous Chinese imports subject to U.S. tariffs, this larger group of goods includes parts and materials that U.S. companies depend on, along with consumer goods.

These tariffs are the administration's response to its charges that Beijing uses predatory tactics to try to supplant U.S. technological supremacy. Beijing's tactics include cyber-theft and a requirement that American companies hand over trade secrets in exchange for access to China's market.