Nobody could've guessed that the century-old homestead would become the agri-tourism destination that it has grown into.

The 2018 season is well under way, and the Skelly family is celebrating 100 years of the family farm being at its current location.(Photo: Erica Pennington/AP)

BELOIT, Wis. (AP) — From June until October, the Skelly family plays host to thousands of visitors eager to see their farm.

Nobody could've guessed that the homestead would become the agri-tourism destination that it has grown into, said third-generation owner Tom Skelly.

"It's really hard to believe (the changes) because when I first started out we were just a dairy farm," he told the Beloit Daily News . "Only later did we get in the crop business."

The 2018 growing season marks 100 years since the Skelly family purchased the Janesville property that has become so well known throughout the Stateline Area.

"We really enjoy being the farm that a lot of people go to...it's something I've grown up with and have always appreciated," said fourth-generation co-owner Scott Skelly.

The Skelly family has local farming roots dating back to the 1850s, Tom Skelly noted, but it was his grandfather, Peter Skelly, who bought the current farm property.

"Our family had a farm about two miles away, but this current property had better soil and a creek," explained Scott Skelly. "Peter bought the farm at auction in 1918."

In the decades since, the Skelly farm transformed from being a home to nearly every type of animal to becoming a dedicated dairy operation.

"First the farm was run by my grandfather Peter Skelly, then my dad, Bob Skelly, myself, and now my sons Joe and Scott Skelly," Tom Skelly said.

The booming farm market business, which now offers strawberries, sweet corn, melons, pumpkin picking and much more throughout the year, began by accident.

A massive drought hit the Midwest in 1989, Tom Skelly said. With many crops failing, the Skelly family planted a small patch of sweet corn near the house. 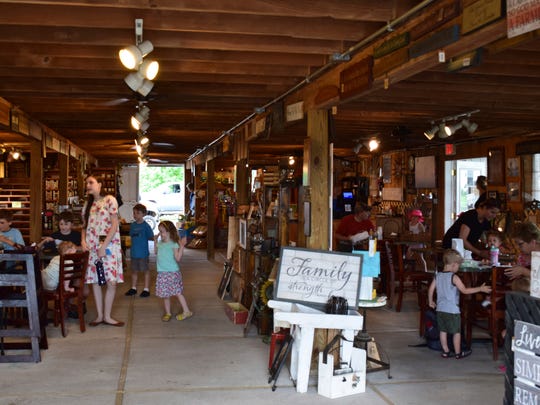 The Skelly family's old dairy barn at in Janesville, Wis., that has been renovated into a beautiful shop that showcases the farm's produce and offers a place for families to enjoy a treat or pick up gifts for loved ones. (Photo: Erica Pennington/AP)

Somehow the few rows had an extra-bountiful harvest, and rather than let the excess crop go to waste, the family began to sell to others from a yard stand.

"We now have a 280-acre farm and about 100 acres of that is dedicated to growing fruits and vegetables...it's really labor-intensive, but it's worth it," Scott Skelly said.

The Skelly's Farm Market season starts each year in late May or early June with the pick-your-own strawberry season. By mid-July there is plenty of sweet corn and lots of juicy tomatoes to go around, and the Skelly's Farm Market produce stands pop up at locations all over the area, stretching from Evansville and Whitewater, Wisconsin to South Beloit and Roscoe, Illinois.

By Labor Day the farm is ready to kick off its busy fall activity schedules, including opening two corn mazes.

October is all about the pick-your-own pumpkin patch, wagon rides and tasty cider doughnuts before winter approaches.

"Our family corn maze this year has a futuristic design that is based on imagining what this farm might look like in another 100 years," Scott Skelly said.

Although none of the Skellys know for sure what the next 100 years will hold at the little farm, they see the business continuing to grow and transform.

For now, Tom Skelly is concentrated on being the farm's semi-retired "repair guy," while wife Cheryl runs the gift barn. Son Joe Skelly is the farm's chief grower and Scott Skelly is the retail and staff manager. Daughter-in-law Laura keeps the on-site bakery, located in what was the farm's dairy barn, churning out turnovers, cookies and pies to feed the masses.

"It's really cool to be a part of a tradition that is continuing on," Scott Skelly said. "My parents never pressured for us to keep the farm going, but we love it."