The cranberry exhibit at Farm Technology Days provided more than a splash in a flooded cranberry bed. 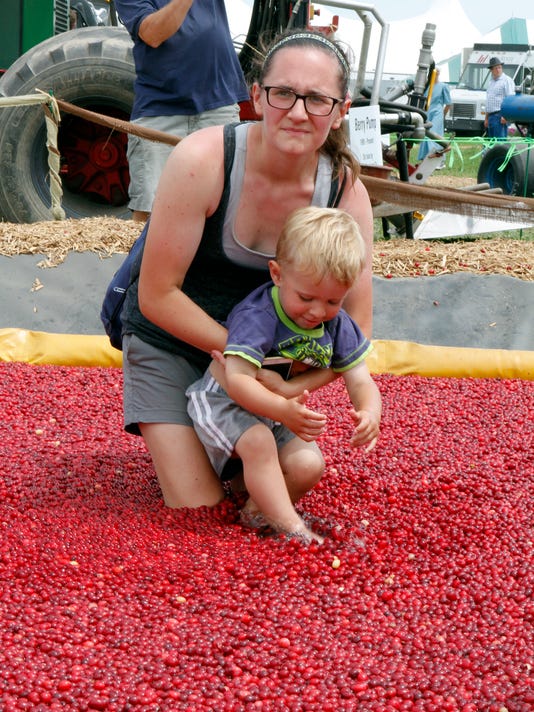 More than once walking through Farm Technology Days I heard youngsters ask if they could go to the cranberry display. It was hot on July 10. Stepping into ruby red water among the floating cranberries sounded like a great idea.

As I walked along 6th Street in Tent City, an older couple asked if I knew where the cranberry bog was located. On the other side of the big white tent, taking a left at the Spudmobile, provided the directions they needed.

I've always enjoyed cranberries, although I admit to limiting that enjoyment mostly to a Thanksgiving side dish or maybe a sprinkle of dried cranberries in a salad. After spending some time at the cranberry exhibit, I gained a new appreciation of cranberries — and the producers that grow them.

Here are five things I learned about the cranberry business.

1. Everybody has seen images of the flooded beds filled with floating cranberries, but beneath that are low-running cranberry vines that grow in dry beds during the summer. Irrigation pipes and sprinklers help protect the vines from extreme heat and cold. Bulk heads help control the water during flooding for harvesting when the berries are knocked from the vines and float in the flooded bed. Ninety-five percent of cranberries are wet harvested. The rest is dry harvested and sold as fresh fruit, according to Cranberry Marketing Committee literature.

2. But why do cranberries float? Each berry has four internal air chambers that allow it to float during wet harvesting. Even cooler than that though — fresh, ripe cranberries bounce when you drop them. It makes you want to grab a handful and give it a try.

3. Ocean Spray is an agricultural cooperative owned by more than 750 cranberry and citrus growers in the United States, Canada and Chile. The cooperative was formed in 1930 by three cranberry growers to find new, year-round markets for their crops. Ocean Spray is also North America's leading producer of canned and bottled fruit juices and juice drinks.

4. Wisconsin's 250 cranberry growers produce half of the world's cranberry crop, according to the Wisconsin Cranberry Discovery Center. Did you even know there was such a center? The Discovery Center, dubbed as "your ultimate guide to cranberries and a must-see destination in the Midwest," is located in the village of Warrens. You can get artisan-made cranberry ice cream, along with learning about the cranberry industry.

5. Mostly, I learned that unsweetened cranberry juice, tastes pretty refreshing. I didn't try the sweetened or diet juice, but am guessing those were even tastier. While I've shied away from dried cranberries because of sugar content, I discovered the total amount of sugar in dried cranberries is similar to that of other dried fruits.

I walked away from the cranberry display a little wiser about this nutrient-dense, antioxidant little berry with big health benefits. I'll be stocking up on fresh berries this fall and freezing them to use throughout the year. 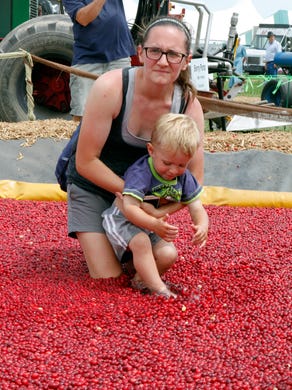 The cranberry bog was a popular spot at Farm Technology Days in Marshfield on July 10, 2018. Carol Spaeth-Bauer/Wisconsin State Farmer
Fullscreen

Visitors to Farm Technology Days could step into a flooded bed of floating cranberries at Innovation Square and learn about Wisconsin's number one state fruit. Carol Spaeth-Bauer/Wisconsin State Farmer
Fullscreen

Martina Schulz,of Pittsvile, and Blake Meissner, of Marshfield, make a bog in a cup at the cranberry display area in Innovation Square at Farm Technology Days on July 10, 2018, in Marshfield. Carol Spaeth-Bauer/Wisconsin State Farmer
Fullscreen

Children could make a bog in a cup using sand, peat, gravel and clay at the cranberry display in Innovation Square at Farm Technology Days in Marshfield on July 10, 2018. Carol Spaeth-Bauer/Wisconsin State Farmer
Fullscreen

A 10-foot by 20-foot dry cranberry bed shows what cranberry beds look like before being flooded to harvest the cranberries at Innovation Square during Farm Technology Days in Marshfield on July 10, 2018. Carol Spaeth-Bauer/Wisconsin State Farmer
Fullscreen

A hot day was a good reason to step into a 10'x20' flooded bed of floating cranberries during Farm Technology Days in Marshfield on July 10, 2018. Carol Spaeth-Bauer/Wisconsin State Farmer
Fullscreen

Isabella Haen, 2018 Fairest of the Fairs, examines a handful of cranberries in the flooded cranberry bed at Innovation Square during Farm Technology Days in Marshfield on July 10, 2018. Carol Spaeth-Bauer/Wisconsin State Farmer
Fullscreen