When gypsum finds its way into low-oxygen manure-storage facilities this product can turn into a deadly gas with a few moves of an agitation device.

Gases in manure containment facilities can be deadly in a matter of minutes.(Photo: Submitted)

UNIVERSITY PARK, PA - Gypsum recycled from manufacturing and construction waste has gained popularity as a bedding source for the dairy industry. Its proponents cite affordability, increased moisture absorption, low bacteria growth and soil benefits as reasons for its use.

However, when gypsum — a source of sulfate — finds its way into low-oxygen manure-storage facilities via removal as soiled bedding, this innocuous product can turn into a deadly gas with a few moves of an agitation device, a dangerous threat that researchers in Penn State's College of Agricultural Sciences believe can be counteracted with an additive.

"In agricultural production, gases near manure storages can pose severe health problems and even be lethal due to toxicity or displacing oxygen," said Eileen Fabian, professor of agricultural engineering. "Tragically, the potential for gypsum bedding to have lethal consequences was not known until it was too late."

Fabian and Michael Hile, postdoctoral scholar in agricultural and biological engineering, were among a team of investigators — which included experts from Penn State Extension's agricultural safety program, manure haulers, farmers and industry professionals — that collected data linking gypsum-laced manure and toxic hydrogen sulfide gas levels during manure agitation in the wake of several human and cattle deaths in 2012.

A follow-up demonstration project documented conditions on 10 dairy farms after these incidents, leading to laboratory investigations of promising manure additives that might reduce dangerous gas levels.

As for what causes the deadly gas, Fabian said that sulfate in manure, when placed in a virtually oxygen-free environment, can convert to hydrogen sulfide. When dairy manure in storage is agitated to mix it prior to its use as a fertilizer, the surface crust that normally forms breaks down, allowing any hydrogen sulfide gas to be released, creating a potentially toxic environment. 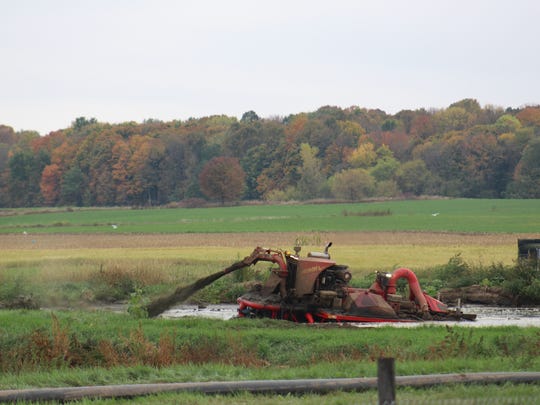 Penn State research shows that when gypsum — a source of sulfate — finds its way into low-oxygen manure-storage facilities via removal as soiled bedding, this product can turn into a deadly gas with a few moves of an agitation device. (Photo: Colleen Kottke/Wisconsin State Farmer)

Hile noted that hydrogen sulfide gas "is quite toxic, even at low levels, and can quickly overtake a person or animal, leading to unconsciousness and even death in a matter of minutes."

Fabian and Hile set out to prevent more tragedies by finding a way to stop the gas release. Their research involved three laboratory trials involving dairy manure additives that the duo believed potentially could counteract the effects of hydrogen sulfide -- the primary additive being iron oxide. Their experiments looked at various ratios of gypsum-laced manure mixed with iron oxide, over several months of storage time.

Hydrogen sulfide concentrations were measured at agitation and between agitation events. The tests showed that adding iron oxide to gypsum-laden manure at an equivalent chemical ratio with gypsum reduced production of the gas during manure mixing to a relatively safe level.

"In most cases, the level of hydrogen sulfide releases was diminished to as low as the manure without gypsum," Fabian said. "We continue to study this effect and share the information to prevent further tragedies to humans and livestock."

As promising as their research is, Fabian and Hile emphasized that workers in the vicinity of manure storage facilities always should put safety first, additives or not. For starters, hydrogen sulfide gas has a familiar "rotten egg" odor, but as Hile warned, "This distinctive odor goes undetected at dangerous levels or after extensive exposure. Because of this, farmers should wear gas monitors that detect hydrogen sulfide concentrations to avoid dangerous conditions."

The researchers also advise workers to avoid being anywhere near the manure storage during agitation, and to consider impact on occupants of nearby surroundings, especially children who are at increased risk because the gas is typically at higher concentrations close to the ground.

"The bottom line is that the benefit of gypsum cow bedding and agronomic values must be balanced against the potential gas hazard," Fabian said. "If gypsum is used, safeguards must be put in place to prevent the potential harm it might cause."