Telling the Story Project content is meant to be shared, and meant to save lives.

The family of Mike Biadasz is telling his story after manure gas took the life of the 29-year-old Wisconsin farmer.(Photo: Submitted)

Tell a story, save a life. That’s the idea behind a new project inserting injury prevention messages into first-hand accounts of farmers and others impacted by agricultural trauma incidents.

Telling the Story Project (www.tellingthestoryproject.org) is a collaboration of three regional agricultural safety centers funded by the National Institute for Occupational Safety and Health (NIOSH).

“Farmers tend to be more open to safety messages after reading about a real incident,” said Scott Heiberger, communication manager at the National Farm Medicine Center and a project collaborator. “Although statistics are important in influencing attitudes and changing behaviors, Telling the Story Project makes safety personal.”

A rural Owen teen died as a result of a farm accident in the town of Hixon. Officials believe the boy entered the manure tanker to fix a mechanical issue. (Photo: Courtesy of the Clark County Sheriff's Department)

Telling the Story Project content is meant to be shared. Farmers, media professionals, teachers, Extension, and safety professionals are especially encouraged to link to the stories and repurpose content. Terms of use for republishing and crediting are explained at www.tellingthestoryproject.org/use-our-stories.

The project was announced June 26 in Halifax, Nova Scotia, during the International Society for Agricultural Safety and Health annual conference.

The common thread in the stories: “We don’t want this to happen to anyone else.” 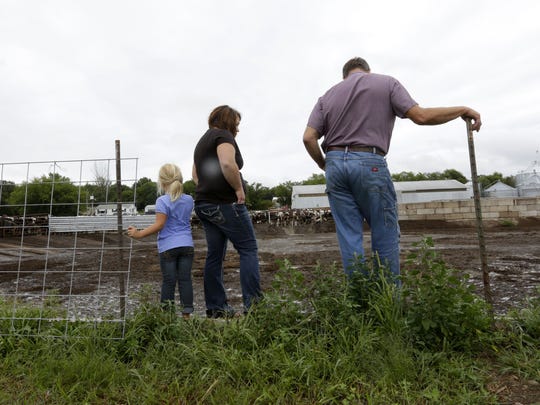 Bob Biadasz stands with his daughter Lisa Grezenski and granddaughter Natalie, 4, in the exact spot where his son was found dead in a freak accident on the family farm. (Photo: Jacob Byk/USA TODAY NETWORK-Wisc)

Stephanie Leonard, occupational safety manager at Great Plains Center for Agricultural Health, has written most of the articles. Her rapport with farmers and previous position as director of the Iowa FACE (Fatality Assessment and Control Evaluation) Program give her a unique perspective and access into farmers and their workplaces.

“Farmers tell me they want to know the facts when they learn about an accident or death,” Leonard said. “In Telling the Story Project, we want to share that information in a way that’s honest and personal, and that includes the ‘how and why’ these injuries happened, and how they impacted people, even months or years later. The experiences of our storytellers stick with you, and I hope they are shared and passed along to help others recognize unsafe situations. They’re great teachers, and we include safety resources that augment their compelling messages.”