Rent a goats will eat away at overgrown yards

This group of bearded "landscapers" has an insatiable appetite for their work.

Rent a goats will eat away at overgrown yards

The three-year-old goat rental business has a roster of 23 goats it rents to flustered homeowners whose land has been overrun by invasive plants.)(Photo: James Marabello/AP)

LUNENBURG, Mass. (AP) — Fitchburg landlords Neil and Julie Brown said they used to have plenty of time to landscape their rental property.

But now, with two young children, the two-family property's yard had become an eyesore of overgrowth.

Also, Julie Brown said the last time they tried to do it themselves her husband developed poison ivy to the point his eye was swollen shut.

This time, the couple turned to a group of bearded "landscapers" with an insatiable appetite for their work.

The three-year-old business has a roster of 23 goats it rents to flustered homeowners whose land has been overrun by invasive plants like poison ivy, poison oak, picker bushes, and bittersweet bushes, to name a few.

On the West Coast, goats have also been used to reduce wildfires. 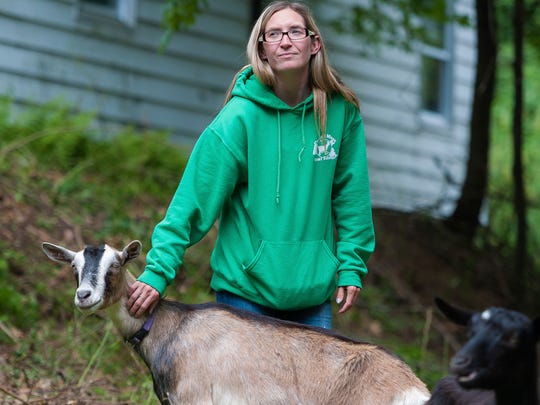 Jenna Sherwood from Central Mass Goat Rentals tends to one of the goats at a job site in Fitchburg, Mass. Ten goats ate the overgrown weeds and vegetation from cut branches in seven days. (Photo: James Marabello/AP)

The Browns said they developed an attachment to the goats, and they came to say goodbye the last day of the job this week.

Their son, 4-year-old Matthew Brown, appeared to have a blast as he frolicked with the goats. "I touched a goat," he exclaimed to his mother.

As animal lovers, choosing goats "seemed like the right fit," said Julie Brown, who showed a reporter some "before" pictures of the property. One couldn't see to a fence to the back of the property in the photos. The goats made it visible.

She said her tenants enjoyed having the goats around. Several passersby and motorists stopped and smiled at the site of the goats on the urban street.

She also credited the company for being easy to work with. The job began with five goats, but midway through, its owner brought five others to increase the pace. She said she was told they are competitive and would eat faster as a larger group.

Price quotes from the company depend on the size of the job.

Central Mass Goat Rental co-owner Tammy Hebert said five goats can clear about a quarter-acre of overgrowth in a week.

The goats are contained to a job site by an electric fence.

Hebert said she considers goats more ecologically beneficial than using chemicals, which sometimes has to be applied more than once. Cutting the plants is another option, but the homeowner is still left to figure out what to do with them, and burning is not a good option, she said.

Finding a landscaper who's willing to wade through poison ivy isn't easy, and is probably expensive, Hebert suggested.

Buying or renting equipment is yet another option, but this can be rough on the land, particularly when the weeds are so plentiful the ground can't be seen, she said.

Goats are ruminants that can break down the plants they consume. They have four stomachs and don't re-seed the vegetation, Hebert said.

"When they're on a job they're playing and interacting," Mrs. Hebert said. "They play King of the Hill. People will end up having a barbecue and invite friends over for the sheer entertainment of watching the goats."

The company is selective about its "hires."

"We can't have any screamers," Hebert said. "We have a nice quiet crowd. The only time they're loud is when they're running low on food. That's a sign for us the job is done. They start getting 'hangry.' "

The company has been catering to residential owners because Hebert said she likes having a connection with the owner. However, this week the company will give an estimate at a baseball park.

When players hit foul balls to the outskirts of the park, they're unable to retrieve them through overgrowth, Hebert explained.

"The word is getting out, and there's been a lot of positive results and people have been happy," Hebert said. "It's a win-win for everyone. Being a vet tech (by trade), I want my animals to live a life where they can make an impact on people, because you can't help but fall in love with these guys. They're just so fun."

Hebert's background also allows her to keep maintenance costs low by taking care of most of their medical needs. She vaccinates and de-worms them herself.

Customers, she said, "are not going to be getting zoonotic diseases, but they should wash their hands after they interact with them, just like with any farm animal."

The company has grown steadily. During its first season it used four goats. By year two it began with nine, and it ended the season with 23, she said.

"I feel like people just overdo it sometimes with the goats. Because each goat can have three, four, five kids. That's just too much. I'm not here for a dairy farm or anything like that. I'm not selling cheese. I'm not selling milk. I'm just sharing this amazing ability that they have. They really make a huge difference. So many people out there just can't keep up with the overgrowth and it's affecting the natural habitat of these plants."

Hebert started the business with her husband, Seth, a landscaper. This year they added fellow landscaper Dan Ahlman as a business partner. Hebert's friend, Jenna Sherwood, has also been helping.

"She and I are pretty much doing all the labor," Hebert said with a laugh. "I think the guys got burnt out."