Hall of Fame induction ceremony set for May 5

Inductees have contributed much to Wisconsin’s Conservation Legacy.

Hall of Fame induction ceremony set for May 5

Charlotte Lukes holds a plaque honoring her late husband, Roy Lukes. The Wisconsin Conservation Hall of Fame will induct the couple at a ceremony on May 5 to honor their decades of conservation work in Door County.(Photo: Tina M. Gohr/USA TODAY NETWORK-Wisconsin)

The Wisconsin Conservation Hall of Fame’s (WCHF) plan to honor four new conservation leaders earlier this month was postponed due to a snowstorm. The new date for the Induction Ceremony is the afternoon of May 5.

Everyone is invited to join in honoring Roy and Charlotte Lukes, George Meyer and Arlie (Bill) Schorger.

The Ceremony will be held on Saturday, May 5 at the SentryWorld Atrium in Stevens Point beginning at 12:30 p.m. with a social reception and registration. Induction will take place beginning at 2 p.m. to be followed by a dinner at 4:30 p.m. Cost of the dinner is $25 and reservations are required.

This year’s inductees have contributed much to Wisconsin’s Conservation Legacy. Their lives reflect the important role of conservation organizations, universities, governments and industries, and significantly, the contributions of women to conservation and environmental quality in Wisconsin and nationally. 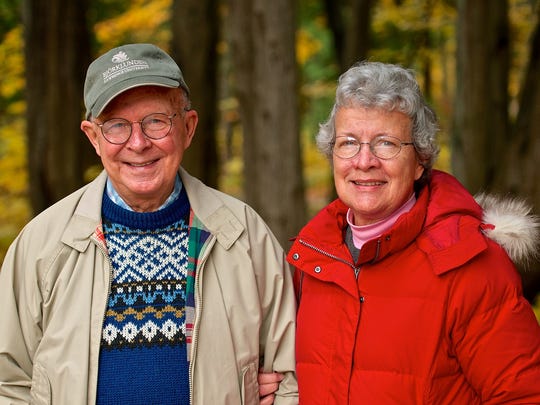 Roy and Charlotte Lukes of Egg Harbor will be inducted in the Wisconsin Conservation Hall of Fame in a May 5 ceremony in Stevens Point. (Photo: Len Villano)

Roy and Charlotte Lukes were a couple who spent their lives as "Partners in Nature' protecting the natural heritage of Door County. They built the Ridges Sanctuary into a center for conservation education, research and advocacy. They educated and inspired citizens of Door County and the State through their many research efforts, lectures and nature walks, books and newspaper columns, and Charlotte continues to carry on their work.

George Meyer was the former Secretary of the Wisconsin Department of Natural Resources (WDNR). During his three decades career with the WDNR, he worked on many of the most challenging, and often controversial, policy issues affecting Wisconsin. Since retiring from WDNR in 2002, he has served as the Executive Director of the Wisconsin Wildlife Federation and continues to actively fight for conservation.

George Meyer, who served as secretary of the Wisconsin Department of Natural Resources and is current executive director of the Wisconsin Wildlife Federation, will be inducted in the Wisconsin Conservation Hall of Fame in a May 5 ceremony in Stevens Point. (Photo: Milwaukee Journal Sentinel files)

Arlie Schorger, after retiring from his business career in paper chemistry, devoted the rest of his life to advancing conservation. As a UW-Madison Wildlife Professor and philanthropist, he was able to  contribute directly to the Leopold's Conservation Legacy. His research and writings on the natural history of Wisconsin's Wildlife, including his 1955 award winning book The Passenger Pigeon: Its Natural History and Extinction helped advance global concerns for wildlife management, biodiversity, and the new field of conservation biology.

The Induction includes tributes by invited speakers and the presentation of the plaques which will be displayed permanently in the WCHF Gallery in the Schmeeckle Reserve Center in at 2419 North Point Drive, Stevens Point. The WCHF and its Visitor Center was established in 1985 to advance the conservation legacy of Wisconsin and will now recognize 96 leaders who have contributed significantly.

There’s no fee to attend the Reception or the Induction Ceremony. Dinner is optional.  See complete details at www.wchf.org/news/.