Experts say the oxygen-starved patch would persist even if farmers could immediately end all fertilizer runoff. 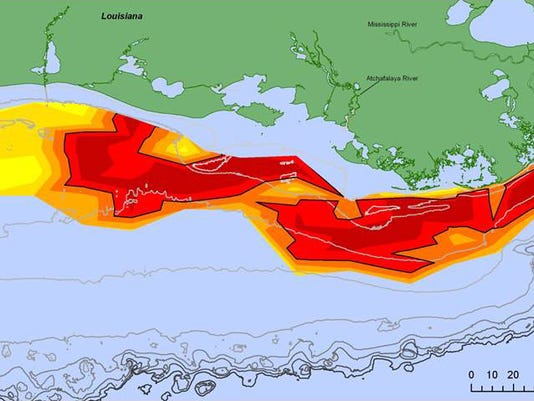 NEW ORLEANS (AP) - The Gulf of Mexico's "dead zone" will be an unwanted summer visitor for decades, Canadian scientists say. They say the oxygen-starved patch would persist even if farmers could immediately end all fertilizer runoff.

An area with too little oxygen to support marine life forms every summer off the Louisiana coast. It's fed largely by nitrogen fertilizer, and a national plan calls for reducing runoff to shrink the area by two-thirds, to 1,950 square miles (5,000 square kilometers) by 2035.

However, runoff from the current year's fertilizer isn't all that's brought down from the 31 states and two Canadian provinces in the Mississippi River Basin. Nitrogen that has built up underground and in groundwater can take more than 30 years to move into rivers and streams, according to a study in Thursday, March 22 journal Science.

"My message is that major changes will be needed to improve water quality, and that also we need to be more realistic about these time frames that we've set out in the policy goals," University of Waterloo researcher Kim Van Meter, the paper's lead author, said in a phone interview.

PHOTO COURTESY UTMSI This image shows the locations of the Dead Zone and the 2010 BP oil spill area in the Gulf of Mexico.

She said she and senior author Nandita Basu, an associate professor of water sustainability and ecohydrology, also are studying the Chesapeake Bay and European watersheds, to see how much "legacy nitrogen" has accumulated and how long it's likely to keep contributing to the amount carried downriver.

Computer modeling suggests the amount of nitrogen carried down the Mississippi would drop 11 percent over the next 40 years if current farming and conservation practices continue, as the "legacy sources" decline, she wrote. But even getting close to the current national goal would require the impossible: that farmers know ahead of time how much fertilizer their crops will need, and use just that amount.

"Farmers have to gamble each season how much to put on," she said. "If they're putting only minimal amounts each year, they risk having deteriorating soil quality."

Donald Scavia, a University of Michigan professor emeritus who contributes to annual predictions of the dead zone's size and was not involved in Van Meter's study, said, "I think it's very well done and I think it's important to set the right context for how long we have to keep the pressure on to make changes, because of the amount of time it's going to take to see results down in the Gulf."

He and Professor R. Eugene Turner of Louisiana State University's College of the Coast and Environment both noted that the dead zone changes quickly with annual fluctuations. For instance, they said, its record lows were during droughts when the river was lower than usual and thus carried less nitrogen than usual.

Van Meter said significant reductions in the dead zone are likely to require fundamental changes in farming, such as changing from corn as a biofuel crop to perennial tall grasses such as switchgrass and Miscanthus.

"About 60 percent of the corn we grow now goes to ethanol, biofuel," she said.
Basu said the paper isn't "completely a negative message."

Farmers who spend time and money to improve agricultural practices get discouraged when water quality doesn't improve, she said.

"I believe if you really understood it will take time, it's not as disheartening as when you expect changes to take place within one and two years," Basu said.