The only way for steel and aluminum tariffs on Canadian goods to be waived is if the North American Free Trade Agreement is rewritten, Trump said. 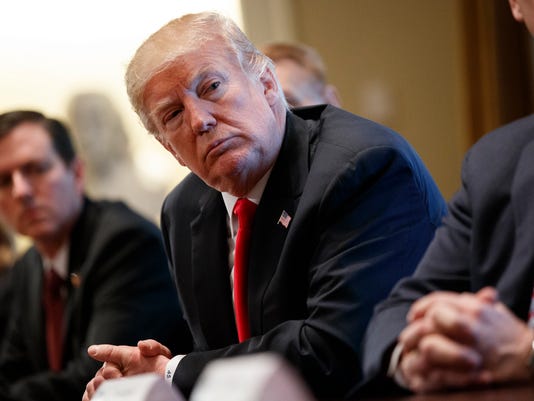 President Donald Trump listens during a meeting with steel and aluminum executives in the Cabinet Room of the White House, Thursday, March 1, 2018, in Washington. Trump's announcement that he will impose stiff tariffs on imported steel and aluminum has upended political alliances on Capitol Hill.(Photo: Evan Vucci, AP)

WASHINGTON — The only way for coming steel and aluminum tariffs on Canadian goods to be waived is if the North American Free Trade Agreement is rewritten, President Donald Trump said Monday.

The Trump administration is slated this week to implement tariffs on all steel and aluminum imported into the country above the objections of close U.S. allies, economists, national security experts and even Republican lawmakers. On Monday morning, the president went after one of those allies, criticizing America’s northern neighbor as a trade conflict between Washington and Ottawa nears.

The president, as he often does, tweeted his disdain for America’s “large trade deficits with Mexico and Canada,” and panned the North American Free Trade Agreement as “a bad deal for U.S.A.” that has spawned “Massive relocation of companies and jobs.”

Trump wrote that his proposed steel and aluminum tariffs “will only come off if new and fair NAFTA agreement is signed.”

He also demanded that Canada “must… … treat our farmers much better,” calling its tactics on U.S. agriculture items “Highly restrictive.”

On Thursday, Trump — during a hastily arranged meeting that caught his staff and entire administration off guard — told reporters he will slap a “25 percent” tariff “for steel” imports and a “10 percent for aluminum.”

“And it will be for a long period of time,” he said in his typically bold fashion.
White House aides have been unable to provide any details about the coming tariffs after Trump circumvented the administration’s policy process by announcing he would impose the tariffs.

Commerce Secretary Wilbur Ross was dispatched late last week and over the weekend to defend Trump’s plan. Ross, who has a personal net worth of nearly $3 billion, contends the tariffs will only marginally increase consumer goods like canned soup and automobiles.

Many Republican lawmakers, who so far are standing by the bombastic GOP president, are extremely frustrated by Trump’s tariff talk. On Friday, Trump tweeted his view that “trade wars are good” and “easy” to win. That prompted pushback from some Republican members.

“Trade wars are never won. Trade wars are lost by both sides,” Sen. Ben Sasse, R-Neb., said in a statement. “ Kooky 18th century protectionism will jack up prices on American families — and will prompt retaliation from other countries. Make no mistake: If the President goes through with this, it will kill American jobs — that’s what every trade war ultimately does. So much losing.”

On Monday morning, Trump also implied that he wants Mexico to alter some of its behavior if officials there want any chance of relief from the coming tariffs.

“Mexico must do much more on stopping drugs from pouring into the U.S. They have not done what needs to be done,” he wrote. “Millions of people addicted and dying.”