UW-Extension will begin new structure, but most people won't notice much difference. 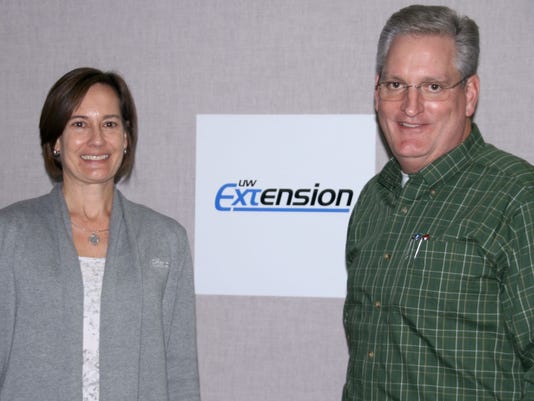 WAUPACA - This year the University of Wisconsin Cooperative Extension service will begin full operation under a new organizational structure. However, most people familiar with Extension program won’t notice much difference.

More than two years ago, Extension staff and working groups began planning for a reorganization to sharpen its focus on education, streamline administration, and meet state budget cut mandates.

Before beginning her new duties in July, Neiswender was community development educator in Winnebago County.

"I’ve been with Extension for over 19 years,” she said. “So, I come to this position with a deep appreciation for the kind of work we do. My focus is now on administration and maximizing the resources we have in this four county area.”

Other areas in Northeast Wisconsin have the same focus. Area 8 comprises Shawano Oconto, Marinette and Menominee counties. Area 12 consists of Door, Kewaunee and Manitowoc counties, while Brown County is one of four single-county areas in the state.

Looking back at the restructuring process, Neiswender said, “Extension has been around for over 100 years, and little has changed in its structure and in how it operated. So, we saw this as an opportunity to take this potential negative and really look at how we do things, and how we could better serve our communities.”

“Prior to the announcement of the structural change, we had been actively pursuing a restructuring to allow for more specialization, because of the changes that had occurred within agriculture, with more complexed and specialized farming operations,” Blonde remarked. “This next generation Extension-wide restructuring is consistent with what we had been pursuing.”

According to Neiswender, much of the restructuring affects areas most people won’t see, including the office of financial services, human resources office, marketing.

Before the restructuring, much of the administrative work landed on the department heads in each county.

“Some of that was county-related work, but a lot was state related, plus they were also doing programming work, serving the residents of the county,” explained Neiswender. “Now area directors have assumed many of those administrative duties, freeing up the local educators to focus more on working with the residents in their county.”

Neiswender meets with staff and Extension committees in each of the four counties pretty much on a weekly basis. “I’m on the road a lot,” she said, "but the only way to understand the local resources we have, and support the local educators, is to spend time in the counties.”

Previously, funding for the educator positions was a 60/40 split between the state and counties.

“That would vary depending on the person’s salary,” Neiswender noted. “This year we’ll be going to a flat fee for the counties, instead of a percentage. In some cases the state is picking up well over the 60 percent. But the average across the state is about 50/50. The longer a person is in a position, the better it is for the county because that fee will stay the same.”

While some counties have eliminated positions, or moved to some part-time positions, the four counties in Area 10 remain very supportive.

“We had one position that was cut back,” Neiswender acknowledged. “It’s really been a continuing dialogue between the state and the counties, and we realize there are other financial pressures that counties are facing.”

Blonde noted that Waupaca County continues to support all current Extension positions. “All of the ag positions in Area 10 also have been fully supported by the counties,” he added.

“The challenge is that the county partner typically wants all the Extension positions it used to have but the state still has to operate with a reduced budget, so that’s where we’re trying to be strategic,” said Neiswender. “If we can’t have one of every program in every county, how can we provide coverage? That’s the part our institution is still figuring out.”

“Family Living programs focus on improving health and well-being, including obesity problems and the opioid crisis, but they also focus on financial health of families,” she said. “Community Development educators are working on many issues that weren’t even thought of 50 years ago, like bringing broadband to rural areas, which has become an important issue.”

Future changes likely will not see new types of positions, but will involve how programs pivot to face the challenges of new issues, according to Neiswender. “As we prioritize, we may have to say no to some things that were done in the past,” she said.

“Counties still have the option to fully fund a program if they feel it’s an important local priority,” Blonde added.

With the re-organization process completed, the focus also has shifted to filling open positions within county offices.

Within the Extension’s new Agriculture and Natural Resources Institute there will be agriculture and natural resource centers that will be more formally designed and led, according to Blonde.

“Until now we’ve had that program area, but the teams we’ve had were structured more informally,” he explained. “Now a more formal structure to these programs can be really helpful to a younger, less-experienced educator.”

“The positions we’re filling now are graduate-degree preferred but are not going to exclude those with a bachelor’s degree,” Blonde said. “That provides an opportunity for more folks who might be interested in pursuing a career in Extension.”

Neiswender emphasized that the mission of Cooperative Extension is not changing.

“We are here to extend the research and other information coming from the University to the people of the state, but also to then listen to the people so that there’s a relationship between the local needs and some of the resources the University can provide,” she said, “and now we have more flexibility so we can allocate resources to work on new issues.”