Wisconsin groups representing schools, technology, business and other interests are backing a Microsoft plan to close the rural broadband gap. 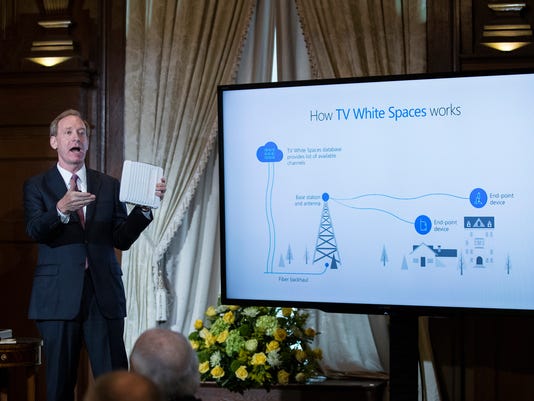 Brad Smith, President and Chief Legal Officer of Microsoft, holds up an ACRS2 device by ADAPTRUM used in TV White Space communications as he speaks at the Willard Hotel in Washington, Tuesday, July 11, 2017, about Microsoft's project to bring broadband internet access to rural parts of the United States.(Photo: Associated Press)

The groups are part of a new coalition, called Connect Americans Now, that aims to extend high-speed internet access across the country. An estimated 23.4 million people in rural America remain without broadband, despite efforts by the government and service providers to extend access.

The strategy, which is getting its biggest push from Microsoft Corp., is to leverage what’s called TV white space, the unused broadcast channels between active channels, to deliver internet service.

That 600 MHz frequency range is sometimes called Super Wi-Fi because the signals can travel over hills and rugged terrain, traits that have allowed rural communities to access local TV stations.

It’s also affordable, according to Microsoft, which cites a Boston Consulting Group study showing that a mix of methods, including TV white space as well as other wireless and satellite technologies, could dramatically lower the cost of bringing high-speed internet service to rural areas.

The coalition envisions funding the build-out with a mix of public and private investments. It also has asked the Federal Communications Commission to make sure the three channels below 700 MHz are available for free use.

That’s drawn some strong criticism from broadcasters who oppose opening up more TV spectrum for unlicensed use.

“It’s the height of arrogance for Microsoft, a $540 billion company, to demand free, unlicensed spectrum after refusing to bid on broadcast TV airwaves” in an FCC auction, National Association of Broadcasters spokesman Dennis Wharton said in a statement.

Still, Microsoft’s Rural Airband Initiative is pursuing 12 pilot projects in 12 states. Sometime this year, the coalition says, a pilot project will be launched in Wisconsin, as well as in Arizona, North Dakota and South Dakota.

Access to high-speed internet service is much like the highway system in its potential to foster business growth and enhanced quality of life in rural communities, according to Carl Ruedebusch, chairman of the Vilas County Economic Development Corp.

He met with Microsoft officials about the project, which he says could be especially valuable in Vilas County, where the population swells to roughly 200,000 in the summer as people visit the area on vacation.

TV white space “is clearly an option” for affordable internet service that’s faster and more robust than some other choices, he said.

Extending the internet to rural areas through underground cables is expensive: It can cost $30,000 per mile for fiber-optic cable and $1 million to run cable under a river.

With Microsoft’s strategy, the signals would be sent over the air from transmitters located up to about nine miles from homes and businesses.

The service wouldn’t necessarily reach sparsely populated areas, but it would work for places where about 80% of rural residents live, said Zachary Cikanek, spokesman for Connect Americans Now.

“This technology is absolutely a game changer,” Cikanek said, adding that it would deliver an internet speed of about 25 megabits per second, fast enough for customers to do most things online.

“Our goal is to have the service available in all 50 states over the next five years,” he said.

Often, rural areas are limited to a slow-speed connection, and many rural students don’t have internet access at home.

“I think this is a viable option to be looked at, especially for homes,” said Kim Kaukl, executive director of Wisconsin Rural Schools Alliance. “Nothing is more critical to improving the quality of rural education than bridging the digital divide.”

Broadcasters say Microsoft has been promising rural broadband service for nearly a decade, without success, and the amount of airwaves available for local TV is shrinking. Nearly 1,000 stations are being moved to new channels to make room for various types of wireless services, according to the National Association of Broadcasters.

“Viewers are already at risk of losing critical local news, emergency weather and community information. Microsoft’s plan to set aside more airwaves to unlicensed devices would further harm viewers in this process,” the broadcasters group said in a posting about the issue on its website.

Connect Americans Now says it’s asking the FCC and policy-makers to ensure there is sufficient broadcast spectrum in every television market to enable broadband connections.

“We are trying to get lawmakers to consider rural communities’ needs that didn’t even exist 20 years ago … and not think like it’s the 1960s,” Cikanek said.

Internet service providers say the TV white-space technology could be helpful but that it’s not a magic bullet that will make rural broadband issues disappear. It will take a mix of technologies, they say, to bridge the internet divide.

There have been some issues, including limitations of transmission equipment and customers' objections to large antennas on their houses, said Vernon Communications CEO Rob Olson.

Nationwide, the federal government has poured billions of dollars into improving rural broadband service using a variety of technologies including fiber-optic cable and fixed wireless service. Wisconsin is second only to California in the dollar amount allocated to states in the Connect America Fund II program administered by the FCC through 2020.

TV white space could work if it’s deployed on a large enough scale, said Christopher Mitchell with the Institute for Local Self Reliance, a Minneapolis nonprofit that helps communities with internet access issues.

“If there are only a few internet service providers trying to use this, and they connect 10,000 people, that’s not enough to manufacture the equipment at a high enough rate to get the prices down and all of the bugs worked out. But if you had a thousand service providers, connecting hundreds of thousands of people, then it will likely work,” Mitchell said.

“I think it will be a good solution over the next several years," he said, “if there are enough service providers that adopt it.”