The time is right for a push to embrace renewable energy. 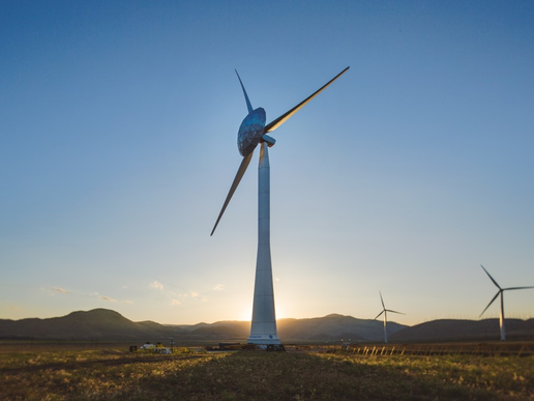 A new conservative group hoping to convince wary Republicans of the value of renewable energy announced its launch in Wisconsin on Dec. 13.(Photo: Chris New for GE Reports)

MADISON - A new conservative group hoping to convince wary Republicans of the value of renewable energy announced its launch in Wisconsin on Dec. 13.

Organizers of the Wisconsin Conservative Energy Forum say the effort is part of a national push that began in Michigan four years ago to win over Republicans who have been reticent to fully embrace the economic benefits of solar, wind and other renewable energies.

The time is right for such a push because renewable energies are now cost competitive with fossil fuels, said Scott Coenen, the group's executive director. Coenen said he will be talking with Republicans at every level to convince them that renewable and clean do not need to be "dirty words on the right."

For too long, Coenen said, Republicans have allowed Democrats to lay claim to the issue and drive the message. The Wisconsin Conservative Energy Forum is designed to change that dynamic and bring Republicans into the conversation, he said.

Renewable energy can be about job creation, economic development and sustainable cost-saving energy, said Coenen, who acknowledged it's been a tough sell for some.

"There's a fair amount of shoulder shrugging and general questions about it," he said. "Nobody associates renewable energy with Republicans."

Scot Ross, director of the liberal group One Wisconsin Now, called the new forum a "Republican front group" that will "raid the state treasury for private companies."

Coenen, 27, said he thinks the group's message will resonate with millennials and other younger conservatives like himself.

"We just don't come in with the preconceived notions and mental baggage the others do," he said.

The group is organized as a 501c3 nonprofit and won't be registering as a lobbying group. Instead, Coenen said its focus will be on educating decision makers. Its leadership council includes well-known Republicans and business leaders throughout the state, including former Gov. Tommy Thompson, former state Rep. Mark Honadel, the vice president of Crave Brothers Farmstead Cheese Debbie Crave and Matt Neumann, president of Sunvest Solar and Neumann Companies Inc.

University of Wisconsin-Madison political science professor Ryan Owens, who also leads a new think tank on campus named after Thompson, is a member of the leadership council and appeared at a Capitol news conference launching the group.

Owens said he hopes the new group will help bring public and private leaders together to create beneficial bipartisan policies.

"There's an excellent opportunity for us to bring this conversation back to a common sense position that Wisconsinites can get behind and that will benefit us all," Owens said.

Crave, who also attended the news conference, said she hopes the council will raise awareness about the need for more money to help businesses that want to invest in renewable energy but can't afford it.