A University of Wisconsin-Milwaukee biologist who studies mating behavior of birds is moving closer to someday helping people fight off diseases.

What turns on a tree swallow may someday help people fight off diseases.

The better looking a male tree swallow is, the more effective his immune genes are, and the more likely his offspring will be equipped to resist parasites and disease-causing pathogens, researchers have discovered.

Female tree swallows apparently know this instinctively when they select a mate. So, how does this help people? 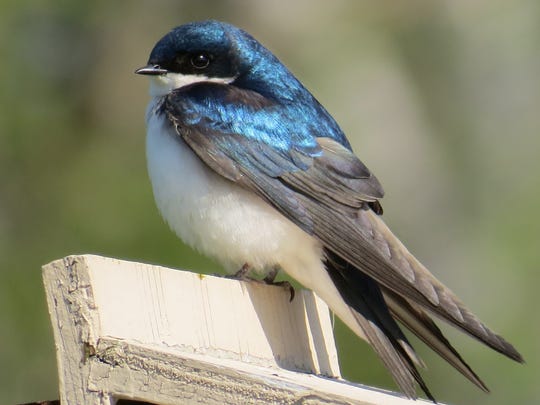 "We're not that far away from basic animal research to things important to humans," said Peter Dunn, a University of Wisconsin-Milwaukee distinguished professor of biological sciences who has been studying the small, acrobatic songbirds for more than 20 years with his wife and fellow biologist Linda Whittingham.

Immune genes also are vital to disease resistance in people, and knowing how variation develops in those genes could inform drug development, Dunn said.

It's well-known that male birds attract females with the help of brightly colored feathers and strong features like a long tail, perfect eye mask or crested head. Dunn and Whittingham's research goes one step further into why that is.

Males with better dark masks around their eyes tend to be older, which suggests strong immune health through longevity, he said.

Think about what purpose colorful tail fans serve for a turkey or a peacock. A peacock's long train would seem to slow the bird down, but it actually shows off his strong immunity genes that female birds seek.

"The only function of these sexually selected traits apparently is to attract mates," Dunn said.

Dunn and Whittingham do research at the UWM Field Station, a 320-acre wetland in Ozaukee County. More than 80 tree swallow boxes, as their houses are called, are scattered around the Field Station to entice tree swallows to mate and nest there. The boxes have "Fred Flintstone trap doors" that catch — but do not harm the birds — so they can be studied up close, Dunn explained.

The research moves indoors to a fourth-floor lab at Lapham Hall on the UWM campus as birds migrate in late summer and early fall.

A doctoral student working in his lab is looking at the genes involved in producing a common yellowthroat's big yellow throat or large black mask. The research team plucked feathers and sequenced the genes within those feathers to study the genetics of color variation.

"What is it exactly about the ornaments that make them good indicators of quality?" Dunn said. "The best way to figure that out is to have a reference genome to go with it. We'll have this template and can take the feather data, put it on the template and make better sense of what's going on."

But the females actually do a lot of fooling around, he said. Dunn's genetic analysis of offspring reveals the male tree swallow on the nest may not be the father.

Typically, only 1 of 5 babies in a nest belongs to the male parenting them, according to Dunn.

The female needs his help to raise the youngsters, but she doesn’t necessarily want his genes. Eighty percent of female tree swallows have extra partners — about the highest rate of any bird in North America, Dunn said.

The biologists' most recent research looked at whether it was aggression of males or the promiscuity of females that led to multiple mates.

The female tree swallow only keeps the sperm of males that are bright blue, traveling miles on the sly to mate with multiple partners in secluded areas away from the nest, he said.

The most likely benefit of the extra-curricular mating? Increased hatching success.

How does Dunn know that? His research team captured male tree swallows and randomly colored the iridescent blue-green feathers of some with non-toxic black ink markers early in the breeding season, prior to before most mating, to separate the effects of feather color from other characteristics such as age and coercive ability.

The UWM researchers found that the males whose bright blue coloring was dulled by markers had lower reproductive success because they did not father any extra-pair young.

Females were choosing the best-looking mates; it wasn't the males forcing themselves on the females.

Genetics of sexual attraction do translate to people.

Some companies, including genepartner.com, now offer to test a potential spouse for genetic compatibility in immune systems for $250.

“With genetically highly compatible people we feel that rare sensation of perfect chemistry," the genepartner.com website says. "This is the body’s receptive and welcoming response when immune systems harmonize and fit well together."

Whittingham may have retired from the UWM faculty last May, but she and Dunn still work together, side by side, chasing after the secrets of bird mates.