The war over daylight-saving time in Wisconsin

The war over daylight-saving time in Wisconsin

When we "fall back" Sunday — remember to set the clocks you still have back an hour by 2 a.m. Nov. 5 — we'll do so peacefully. (Well, except for complaining about how much earlier it's getting dark.)

But the four-decade battle for daylight-saving time in Wisconsin was anything but peaceful.

In World War I, the federal government imposed daylight-saving time in an effort to conserve fuel. But hostility to the measure led Congress to abolish it soon after the war ended, giving states the option of bringing it back if they wanted.

Wisconsin — especially rural parts of the state — did not want it. Farmers argued that setting clocks ahead one hour in the spring would wreak havoc with cow-milking and disrupt work in the field.

Some cities, particularly Milwaukee, thought differently. When the city experimented with its own version of what was then called "fast time," the Legislature in 1923 enacted a law making it illegal to use anything but Central Standard Time in Wisconsin.

In 1930, when some Milwaukee businesses started changing their clocks on their own, an odd alliance of farmers, labor and movie theater operators — worried "extra" sunlight would keep moviegoers outside — pushed the Legislature to up the ante. By 1931, not only was it illegal to impose daylight-saving time in Wisconsin; a business operator could go to jail for doing so, with up to a $50 fine and as much as 30 days behind bars.

Nearly every year for the next decade, daylight-saving time proponents pushed a bill to roll back the law. And every year, the Legislature pushed back.

Even when the federal government instated "War Time" during World War II, legislators tried to get Wisconsin out of it — at one point, seeking, absurdly, to have the state moved into the Mountain time zone.

After the war ended, as neighboring states allowed daylight-saving time, more business groups clamored for Wisconsin to join them.

About 500 people attend a spirited hearing on daylight-saving time before the Assembly State Affairs Committee in Madison on Feb. 2, 1955. At the hearing, big-city supporters of daylight-saving time squared off against rural opponents of the measure. (Photo: Milton Leidner/Milwaukee Journal)

Among those clamoring the loudest was The Milwaukee Journal. In early 1947, forces supporting "fast time" convinced the Legislature to call for a statewide referendum that would endorse allowing municipalities to decide for themselves. The Journal went all-in, running a series of editorials supporting the change, conducting a communitywide survey on the topic, and even taking out ads urging readers to vote "yes" on April 1.

"For Sunlight's sake … for Daylight's sake … for Recreation's sake … for Leisure's sake … for Health's sake  … for better living, vote Yes," read one Journal ad, published in the March 26, 1947, edition. "Summers Are Short and Winter Is Long. You deserve the added measure of sunlight … play time … leisure time … gardening time that Daylight Saving can bring you."

In an editorial that same day, the paper added: "The Journal favors daylight saving for the urban areas. City residents working in factories, stores and offices need the extra hour of sunshine that daylight saving provides. They need it for better health and for happier living."

Despite winning by almost a 2-to-1 margin in Milwaukee County, the referendum was rejected by 55% of voters statewide, ending the discussion for nearly a decade. 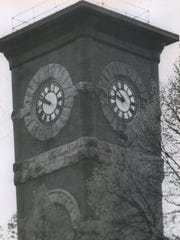 The courthouse clock in Monroe apparently hasn't decided whether to accept daylight-saving time. One of the four faces still records standard time. Green County voters rejected daylight-saving time by a 5-to-1 margin in the Apr. 2, 1957, referendum. This photo was taken in May 1957. (Photo: Ray Barth/Milwaukee Journal)

After a furtive effort to revive the referendum idea in 1955, business groups made another push in 1957, this time calling for a vote on a binding referendum on daylight-saving time.

Journal reporter Robert W. Wells pointed to one new factor that could make the difference.

"Perhaps the real ace in the hole, as far as proponents of daylight saving are concerned, is television," he wrote in a March 17, 1957, article. "In 1947, few homes had a set. Now families on farms and in small towns as well as in the cities watch the programs that come from New York and Hollywood. A vote against Daylight Saving Time April 2, therefore, would amount to a vote in favor of mixed-up TV schedules … "

Whether TV was the clincher or not, Wisconsin voters — with Milwaukeeans accounting for most of the margin of victory — finally endorsed daylight-saving time, with the measure going into effect 23 days later.

"The fruits of victory will indeed be sweet — extra evening sunshine hours this summer," Milwaukee Association of Commerce President Lester S. Olsen told The Journal in an April 3, 1957, recap.