EPA, herbicide makers agree to new limits for use of dicamba

The EPA has reached a deal for new voluntary labeling requirements for a controversial herbicide blamed for damaging crops.

EPA, herbicide makers agree to new limits for use of dicamba

The Environmental Protection Agency announced Friday, Oct. 13, its agreement with Monsanto, BASF and DuPont regarding the application of dicamba, which is used to control weeds in fields of genetically modified cotton and soybeans. Farmers who don't buy the special resistant seeds sold by the herbicide makers have complained that dicamba sprayed on neighboring properties drifts over and harms their crops, resulting in temporary bans issued last summer by state officials in Arkansas and Missouri.

"EPA carefully reviewed the available information and developed tangible changes to be implemented during the 2018 growing season," the agency said in a media release. "This is an example of cooperative federalism that leads to workable national-level solutions."

Under the deal, dicamba products will be labeled as "restricted use" beginning with the 2018 growing season, requiring additional training and certifications for workers applying the product to crops. The new rules will also limit when and how the herbicide can be sprayed, such as time of day and when maximum winds are blowing below 10 mph. Farmers will be required to maintain specific records showing their compliance with the new restrictions. 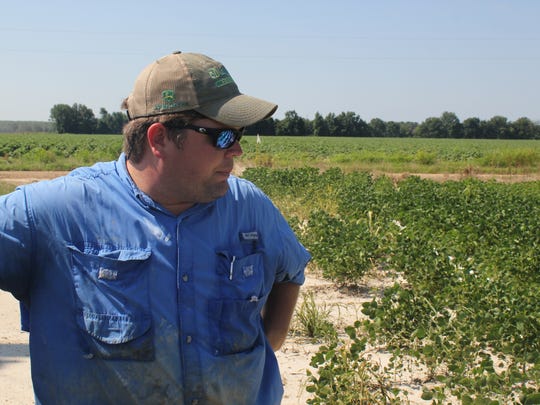 East Arkansas soybean farmer Reed Storey said half of his soybean crop in Marvell, AR., has shown damage from dicamba, an herbicide that has drifted onto unprotected fields and spawned hundreds of complaints from farmers. (Photo: Andrew DeMillo, AP)

The EPA said the labels could be revised again in two years, when the current federal registration allowing dicamba to be sold in the United States is up for review.

Monsanto said that it had proposed the voluntary label changes, which were accepted by the EPA.

"Based on the science behind our low-volatility dicamba product and learnings from the 2017 season, we are confident the required training and record keeping can address the main causes of off-target movement," said Ty Vaughn, a Monsanto vice president. "We want to stress how important it is that farmers use products approved by the EPA for use over the top of dicamba-tolerant crops, and use them in accordance with all label requirements."

DuPont said in a statement the company appreciated how the industry and the EPA worked together to establish the new guidelines.

Dicamba has been on the market for decades, but problems arose in recent years as farmers began to plant new seeds engineered to be resistant to the herbicide. Because it can easily evaporate after being applied, dicamba can drift on the wind into neighboring fields. Some farmers also illegally sprayed dicamba before federal regulators approved new versions that are supposed to be less volatile.

The herbicide is also suspected as a factor in the slaying of an Arkansas soybean farmer who was allegedly shot by a worker from a nearby farm where the chemical had been sprayed. Farm worker Allan Curtis Jones, 27, is accused of shooting Mike Wallace, 55, in a confrontation over dicamba, which Wallace believed had drifted onto his farm and damaged his soybeans.

Denise O'Brien, a board member with the advocacy group Pesticide Action Network, said the EPA's deal with the companies doesn't go far enough. She said about 3 million acres of crops were damaged by dicamba drift this year.

"A drift-prone herbicide like dicamba should never have been let on to the market in the first place," said O'Brien, a farmer from Iowa. "Monsanto and other corporations have put farmers in this position, but so far they have not been held accountable for the problems caused by their products."

“Farmers look to new innovations like dicamba-tolerant soybeans to help grow healthy, affordable food while combating pests and diseases," Moore said. "We’re encouraged by EPA’s label changes which we trust will allow farmers to continue to utilize this important tool while also working to protect and prevent damage to non-dicamba tolerant crops."