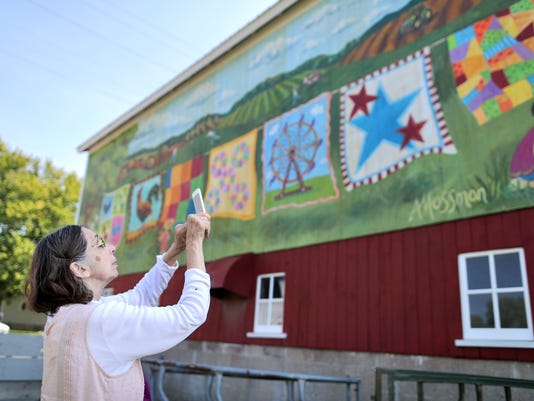 In this Sept. 12, 2017, photo, Duwanna Wall takes a photo of the barn quilt mural on Larry and Judy Vance's barn near Elkhorn Township, WI, while on a farm tour with a group from Oak Park, IL.(Photo: Anthony Wahl/AP)

JANESVILLE (AP) - Patricia Keller smiled like a schoolgirl as she thought about her next stop.

"I'm 68 and going to visit my first dairy farm this afternoon," she said. "I guess you could say it is on my 'bucket list.'"

As she spoke, two other women leaned on a fence at the Judy and Larry Vance farm outside Elkhorn.

They pointed at the Vances' polled Hereford cattle lounging in the shade of a tree, while others in their group viewed a large mural on the side of the Vance barn.

Keller and the others were among 25 people from the Chicago area on a recent tour of Wisconsin barn quilts and back roads in Walworth County.

"I'm getting them out into the countryside," said Tom Laughlin, organizer of the homegrown effort. "I know I have a new opportunity here."

The Lake Geneva man led three tours in September and plans at least one more in October featuring large and smaller dairy farms as well as the quilt blocks. People on the tours are from the Milwaukee, Madison and Chicago areas, The Janesville Gazette reported. 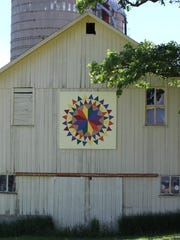 "Most of the farms are off the main roads," she said. "They get people out into the countryside to experience the natural beauty and the history of our old barns."

Walworth County is well known for its resorts and lakes. Now Laughlin is showing off its farms.

The idea came to him while doing video-production work for Walworth County a few years ago, when he learned how popular barn quilts are in the county, the state and across the United States.

"I looked into it and found Walworth County has 100 of its own," he said.

A barn quilt is a large piece of plywood painted to look like a quilt block. Many contain simple geometric shapes such as squares, rectangles and triangles, and they are painted with vibrant colors.

Usually, the 8-foot-by-8-foot blocks are hung on barns and easily seen from afar.

"I see the pride that people have in their quilts," said Denise Bridges, a member of Laughlin's tour. "Each of these quilts was made with care and time."

People can download a barn-quilt map from the Walworth County UW Extension website and go on driving tours.

But Laughlin developed the idea by adding dairy farms to the outing, bringing tourists on comfortable buses and making a stop for lunch. 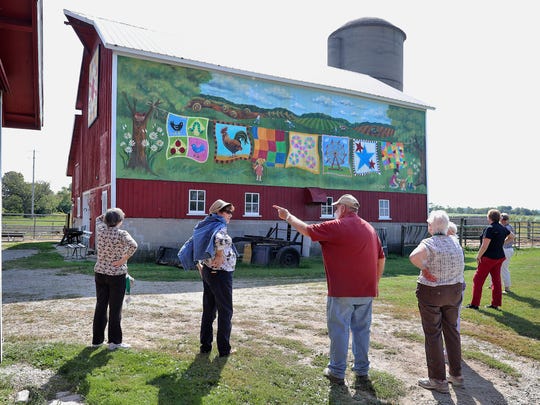 Larry Vance (center) points to something on his Elkhorn Township, WI, farm while talking with a tour group from Oak Park, IL. Vance and his wife, Judy, don't mind tourists visiting their farm. (Photo: Anthony Wahl/AP)

The Vance farm with its 40-foot mural on the northwest side of the barn is a highlight. About five years ago, artist Amy Mossman painted the colorful mural of quilts on a clothes line with Vance grandkids playing in the foreground.

"From the time we moved here, we always wanted something on the barn," Judy Vance said.

She and her husband also hung a traditional Harvest Star quilt block on the front of their barn.

"We enjoy visitors," she said. "They ask interesting questions."

Farmers such as the Vances are not paid for allowing tourists to stop at their farms.

"They are proud of their family farms," Laughlin said. "As a result, they are glad to have the chance to show people how farming is done right."

He called farmers "our truest Americans." A few years ago, Laughlin made a name for himself by telling the stories of old barns in the production of "American Barn Stories," a series on Wisconsin Public Television.

Helping city folks get a closer look at rural Wisconsin is an outgrowth of his series by Kovia Productions.

“When you are cooped up in the city, you are missing something in life.”

"When you are cooped up in the city," Laughlin said, "you are missing something in life."
He grew up on the south side of Chicago and started coming to Walworth County when his parents bought property on Lake Como.

His undertaker father was a skilled hobby photographer who took young Laughlin on back-roads drives in Walworth County.

"He always took pictures of old barns with his 35mm Pentax camera and Kodachrome film, and I would ask why," Laughlin said.

Laughlin's father replied: "Because the barns are so majestic, beautiful and 'right' on the landscape."

"Now I have the happy chance to bring other people into the countryside," Laughlin said. "It seems to feed their hearts and souls. We're all creatures of the land. Most people yearn for a connection to the earth, whether they know it or not."