For the love of sheep: one boy's dream of farming comes true 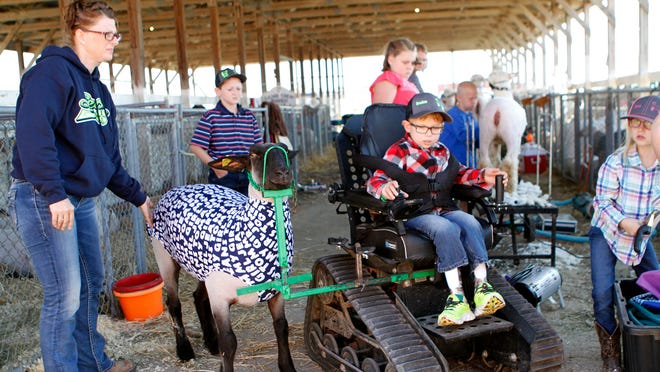 JEFFERSON - Braden Pederson is always happy when leading his sheep - his eyes light up, he flashes a smile and beams.

But then, he's happy around all animals - sheep, chickens, turkeys, ducks, cats.

Living in a strong farming community, Braden, 10, of Cashton, always wanted to be a farmer.

And he did figure it out - with help from his local 4-H group, Leon Livewires, and some friends.

Paralyzed from the waist down, Braden has minimal feeling in his legs. He can't go to the bathroom on his own, couldn't show sheep on his own. Until this year.

Braden joined 4-H with hopes of it being the "closest way that he can become a farmer," said Jackie.

Family friends Beth and Gabe Leis let Braden borrow one of their sheep at their farm to show the first year.

"He loved it. He fell in love," said Jackie.

The next year they borrowed a couple more sheep from Beth and Gabe, but Braden took care of them at his own home.

"He was down there every day, watching them, being with them," explained Jackie.

When he was old enough to show, he bought his own wether and showed it at the Monroe County Fair, using his little wheelchair and a metal harness Gabe fabricated and welded. The harness attached to Braden's wheelchair on the side.

"Somebody always had to be with him. Somebody had to push his wheelchair," Jackie said. "It was hard to do through the sawdust."

With the 4-H club helping to raise money, Pedersons were able to buy a track chair last year. Gabe revamped the metal harness so it would fit the bigger chair and Braden could show his sheep by himself this year.

"This chair and being able to show with his peers has been huge," said Jackie. "This was the first year he wasn't stuck by mom. It's given him so much independence. He's learned a ton about himself and the strength he has and what he can do."

What he can do is take care of his sheep and other animals he loves.

"He has a way with animals that I've never seen before," Jackie noted.

Addie, the sheep Braden had at the Wisconsin Sheep and Wool Festival, is a big girl, standing as tall as his track chair.

"The big kids can't take her around. I have trouble taking her around, but when she's with him she's the most docile thing in the world," said Jackie. "She knows or something. He has a special connection with animals. He has all kinds of animals and they're all like that with him."

Braden couldn't decide what it was he likes about sheep, other than he loves them. And loves being able to show sheep without help from his mom.

He's also excited to go hunting with his dad this year in his track chair, "so dad doesn't have to push me."

As Braden sat smiling at Addie, she baa-ed quietly, as if talking to him. Asking what he thought she was saying, Braden wasn't sure, but thought she might be saying she loved him.

For a boy whose goal was to be a farmer, "he already is," Jackie said.