A rendering shows what the Agape Agrihood might look like if the project gains final approval in the town of Mukwonago. The subdivision, centered around a mini farm, could include community gardens and pasture land for animals boarded in the barn.(Photo: Submitted)

TOWN OF MUKWONAGO - If Ryan Catarozoli's mother hadn't driven past the sign for the Agape Agrihood development he might have never known about it.

His mom called him to say she had found the perfect subdivision for him and his wife, Kaylin.

Kaylin had always had a dream of owning a horse, but Ryan was concerned about boarding a horse far from home where his wife wouldn't get an opportunity to see it often.

Catarozoli said it would be amazing to have the opportunity to live close to the horse, help with chores and pay for boarding. An agrihood subdivision was a perfect solution to the logistics issue. 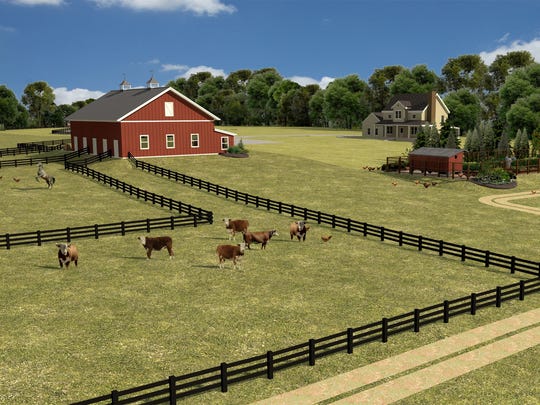 A rendering shows what the Agape Agrihood might look like if the project gains approval in the town of Mukwonago. The subdivision, centered around a mini farm, could include community gardens and pastureland for animals boarded in the barn, along with walking and riding trails. (Photo: Submitted)

Right now the Catarozoli family has reservations for a lot, which aren't expected to go on sale until August. Their goal is to break ground in spring and build.

The open area includes 9 acres of pastureland for horses, or small beef cattle, with run-in shelters — 10x20-foot sheds where animals can get out of the weather.

The development will allow for residents to experience “farm-to-table living” and a rural ambience. Catarozoli appreciates the feeling of knowing where food is coming from.

"In a time where drones deliver food from Amazon, watching it grow or helping with it is much more appealing," he said.

He explained that the average meal travels over a thousand miles to get to the kitchen table. Food is transferred through various facilities to be cleaned, packed and sold. He added that it isn't an efficient or sustainable way to get food to people.

"It works because you go to the grocery store and buy it, but the broccoli you bought may have traveled 1,500 miles to get to you," Catarozoli said.

The agrihood also provides the opportunity to ask neighbors to split costs of purchasing, boarding and butchering a beef cow. Catarozoli noted that one cow can go a long way in feeding people.

Not a 'millennial' fad

People are becoming more in tune with their carbon footprint, sustainability and doing their part, Catarozoli said.

"The terms are less cliche and more about lifestyle," he said.

Catarozoli admits to not having a social media presence such as Facebook. He is interested in living a natural lifestyle.

"I know I'm in the millennial age bracket, but I take offense. That is not me," he said.

Catarozoli remembers picking corn in Big Bend as a job while he was in middle school. He said he has always had a good work ethic.

Catarozoli hopes to instill the same values in his 2-month-old daughter.

Catarozoli said it is his hope living on the farm helps her to work hard for what she wants.