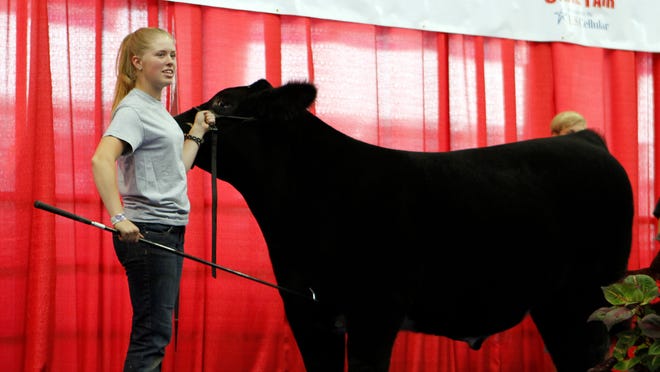 WEST ALLIS - On one side of the Case IH Coliseum at State Fair Park the auctioneer's voice boomed as bidders competed for the top bid on the best animals at the Wisconsin State Fair for the Governor's Blue Ribbon Livestock Auction.

“Every year, the Blue Ribbon Livestock Auction helps support youth in our state who are interested in agriculture,” Governor Walker said. “It not only highlights the strength of our livestock industry, it also helps to ensure the future of agriculture in Wisconsin by supporting the youth exhibitors who want to build a future in farming.”

With the UW-Madison marching band and Bucky Badger setting the tone for the evening, Lauren May, of Mineral Point, in Iowa County, brought her Grand Champion crossbred steer on stage.

The 1377-pound steer sold for $50,000 with the winning bid from Meijer and Bob Lannin Racing, which was donated to the Governor's Blue Ribbon Livestock Auction Scholarship Fund.

On the other side of the coliseum, hogs laid in pens, sheep and cattle stood patiently with their owners, waiting to go on stage. Those walking off the stage grabbed a photo in front of the State Fair sign before heading back to the barn.

An emotional Katie Leahy, of Lafayette County, fought back tears as the culmination of a summer of hard work and the attachment she'd formed with her champion Maine-Anjou Steer was about to come to an exciting end.

"I think that the projects these kids take on with these animals and raising them every day - their health, what they get to eat, taking care of their skin, their hair - it's quite a commitment," said Katie's mom Leah.

Katie's twin sister, Claire, had a Champion Charolais Steer in the Governor's auction. They both worked hard during the summer, giving up many things to get this opportunity.

"Sometimes they see their friends hanging out and going to movies. With what's required to get to where they are at, they sacrifice some of those things," explained Leah.

Katie agreed. There are a lot of sacrifices if you want to show cattle at the state fair.

"It's worth it when you come to one of these shows and you win it," said Katie. "You're basically dedicating your whole entire summer. There's no excuses. It has to be done."

Grand champion winner Lauren May has been showing cattle at the state fair since she was 12, but started showing when she was 7. Her grandpa and dad grew up on the farm, showing cattle, "so it's kind of what we're raised to do."

"There are a lot of good competitors at our state fair. It's not easy to win the fair," Lauren said. "There's a lot of good steers here. It's definitely an honor to win because it takes a lot."

Lauren, like Katie, knows the sacrifices it takes to be part of the Camp of Champions. Not hanging out with friends during the summer, not going on vacation like most kids, working from 5 in the morning until 10 at night.

"This is my job. Like most kids in the barn, this is our job for the summer," Lauren said. "Those kids who do have a job, they are guaranteed pay, but for us, this is not guaranteed pay."

Lauren, like the rest of the exhibitors in the Blue Ribbon Auction, could hear their hard work paying off as bidders pushed prices up.

"It's really nice of all those people to support all the youth," Lauren added. "It's pretty exciting. It's always a fun time at the auction, with all the good prices it helps even more."

Lauren plans to use the money she earned from the auction for college. As a high school senior, she plans to attend Oklahoma State University, majoring in something related to agriculture.

Brady Meudt, 17, of Walworth County, had the Grand Champion Market Lamb, with a winning bid of $10,000 from WalMart, which was donated to Feeding America Eastern Wisconsin.

Being part of the auction was a "feeling like no other," for Brady.

"It's absolutely incredible, getting to be on the stage and look at all the buyers, all the people supporting the ag industry," said Brady. "It's just really cool."

Brady has been showing sheep since he was 5. While he has to "throw away" his summer to show at the fair, it's worth it.

"It's fun, it's different. There's not a lot of people who really do it," Brady explained. "My dad and I have done it since forever. My dad did it when he was young. It's something we really enjoy doing together."

And for Coltin Coffeen, of Brown County, the 2017 Wisconsin State Fair is going to be hard to top. He's shown dairy for the past three years at state, but it was his first year showing dairy steer. After showing at the county fair for three years, he decided to "give State Fair a try."

"Ever since I started showing steers, my goal was to win at state fair and now it's finally happened," Coltin said. "It's pretty exciting."

All of the exhibitors at the State Fair worked hard to get their animals ready to show.

"You've got to work hard if you want to win. I think a lot of kids in these barns do work hard," said Lauren. "Work hard and follow your dreams. You've got to be responsible and you've got to really like it and enjoy it."