Small flocks of chickens and other young livestock are susceptible to hungry predators such as coyotes farmers say.

MOON TOWNSHIP, PA. - Most mornings, Robert Mowery and his family head down the hill from their Moon Township home to their small farm to tend to their flock of chickens.

But over the course of several days in June, a clever coyote — or maybe several coyotes — feasted on about 50 of the Mowerys' 200 chickens.

Mowery, an associate partner and chief technology solutions architect at IBM, spends his days preventing cyberattacks. So he didn't expect a coyote or two to fool the automated farming methods on the farm he started building with his family in December, but mother nature proved him wrong. The coyote had figured out that the door opened at the same time every morning, waiting outside of the coop for a fowl feast.

The family planned to start selling chickens and eggs at local farmers markets in June, but the depletion of their product not only delayed sales, but also caused them to delay getting additional animals, like pigs and sheep, for fear of more attacks. Though they have all the animals now, they likely won't be able to start selling at markets until August, Mr. Mowery said. 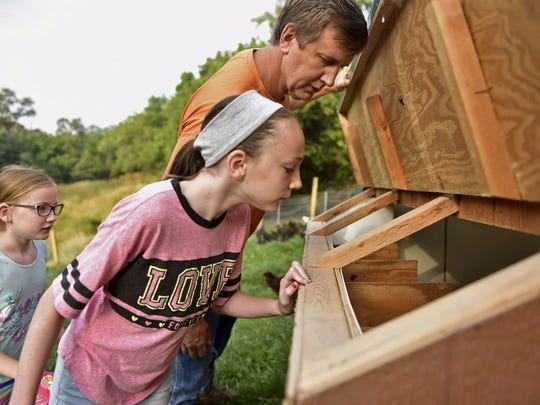 In this Thursday, July 6, 2017 photo, Madison Mowery, 11, peeks into the side of a chicken coop with her father, Robert Mowery, as Hailey Mowery, 10, watches from behind at their Moon Township, Pa. farm. While no eggs were found that morning, the family is hoping the chickens eventually produce enough eggs to sell at local farmers markets. June coyote attacks that killed at least 50 chickens set back their original plan to begin selling eggs as early as June. (Photo: Anna Spoerre, AP)

He calculated his base loss of product and profit to be at least $1,000.

The Mowerys aren't the only farmers in or near Allegheny County whose livestock catches the attention of predators lurking in the surrounding woods. As coyote sightings increase in southwestern Pennsylvania, farmers are looking for ways to protect their livestock.

Coyotes recently slightly injured some of the 11 horses on Dawn Anzelone's New Dawn Farms in New Brighton, Beaver County. The horses she breeds and boards are worth up to $40,000, she said, so a coyote attack can run a high cost.

"The vet bills are astronomical for a horse," said Anzelone, who also has dogs and cats. "And if they take my pets, that's a whole other game. That would start a war, is what it would."

The coyotes on her property aren't afraid to walk right up to people, she said. And even though she hasn't seen them display any aggression toward humans, Anzelone said they are living "a little too close for comfort," describing their night time calls heard from her home as a zoo of howling and cackling.

But Dan Puhala, the wildlife conservation officer for the state Game Commission who covers northern Allegheny County, said the idea of coyotes as giant predators waiting to pounce on people is a misconception, as the animals are typically evasive.

But Puhala said he has been getting more calls about sightings of the 35- to 45-pound animals over the past few years as more houses are built on land that used to be rural.

As far as the coyote population in Allegheny County, Puhala said it's possible numbers could increase, though he thinks at this point the population has stabilized.

Still, John Sheldon, a dog warden with the state Department of Agriculture for the past 12 years, said he thinks an increase in coyote sightings is likely, especially in Allegheny County where wooded areas are being replaced by homes.

"There's no birth control for animals," said Sheldon, who is based in Washington County. "So if woods size shrink because of people, we're probably going to see more (coyotes). That's just nature."

But there may be some rest for weary farmers, especially sheep farmers, who Sheldon said encompass about 95 percent of the coyote complaints he receives.

Thomas Kline, the Game Commission wildlife conservation officer covering western Allegheny County, said he's seeing results of urban sprawl all over his territory. He said coyotes are learning how to survive with more human interactions, though he doesn't think they want anything to do with humans.

In this Thursday, July 6, 2017 photo, Madison Mowery, 11, attempts to scoop up a chicken she is chasing with a net at her family's Moon Township, Pa. farm, while helping her father corral the birds back into their coops. (Photo: Anna Spoerre, AP)

About 99 percent of the time coyotes will run from humans, he said, recommending people act big and make a lot of noise as a scare tactic if necessary.

There is also a statewide licensing program called Dog Law that not only requires dogs above the age of 3 months be registered, but also helps compensate livestock owners for any damages to livestock by coyotes, said Bonnie McCann, communications director for the state department of agriculture.

Initially established in 1893, Dog Law states if damages are not traced back to a dog, the state makes up for any monetary loss to the farmer or individual.

So far this year, two domestic game deaths adding up to $165 in damages have been reported in Allegheny County. The most recent Dog Law complaint made before 2017 in the county was in 2009.

But for Mowery, who isn't eligible for Dog Law because his chickens are free-range, there is an extra level of challenge. He said he must obtain a hunting license in order to shoot coyotes on his property because his farm is not his source of livelihood.

So he's trying some other things, including hanging rags soaked in putrid wolf urine — courtesy of a zoo — around the property. For the past two weeks, the scent it has kept the coyotes at bay, at least for now, he said.

"It's just funny in the sense that I can go to all these elaborate schemes to make my life easier and easier on animals but I get foiled by a coyote," Mowery said.