Guests at Farm Technology Days at Ebert Enterprises in Algoma could watch field demonstrations of choppers on July 12. Field demonstrations were cut short during the event because of weather. Carol Spaeth-Bauer/Wisconsin State Farmer
Fullscreen 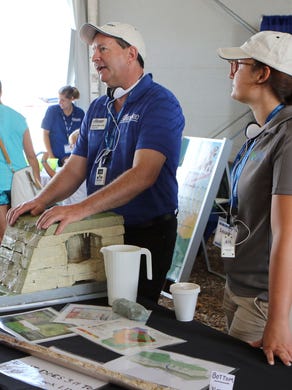 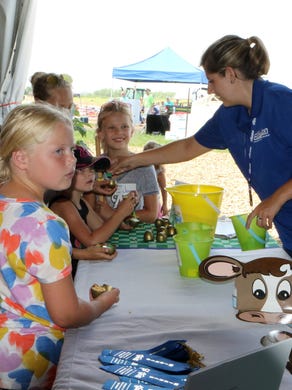 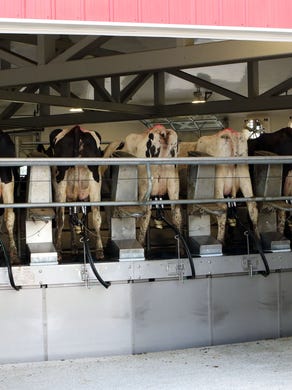 Footwear serves as floral planters outside the round red barn at Ebert Enterprises. About 50 percent of the guests at Farm Technology Days toured the farm on tram rides. Carol Spaeth-Bauer/Wisconsin State Farmer
Fullscreen 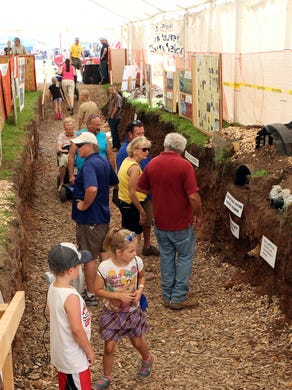 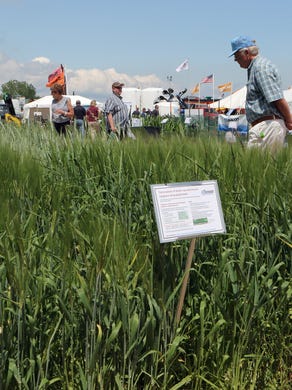 Franciso Ariaga, with the UW-Extension, give a talk in Spanish on soil health during Farm Technology Days on July 12. Carol Spaeth-Bauer/Wisconsin State Farmer
Fullscreen 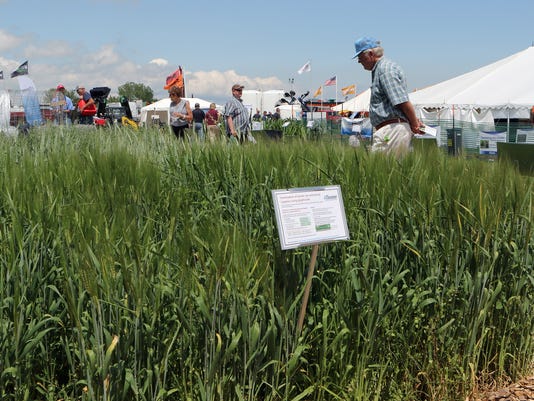 ALGOMA - The tents are down, the shiny new equipment gone back to dealers' lots, the farm tours ended, 15,000 hamburgers and cheeseburgers and 11,250 bowls of ice cream served. The 2017 Farm Technology Days at Ebert Enterprises was a success in many ways.

Kewaunee County almost burst at the seams, with the three day show attracting nearly the number of county residents in the first two days, according to information from the Farm Technology Day committee. The county was the first to host Wisconsin Farm Technology Days and have more individuals attend the event than the county's total population, as far records of the show indicate.

The first day alone drew the highest attendance on day one in several years, with more than 10,000 people passing through the gates. Before closing time on the first day, ice cream purchased for the entire event was sold out. Ice cream on hold had to be brought in that afternoon.

The official Opening Ceremony had a record-breaking 550 attendees, including Governor Scott Walker and Department of Agriculture, Trade and Consumer Protection Secretary Ben Brancel. 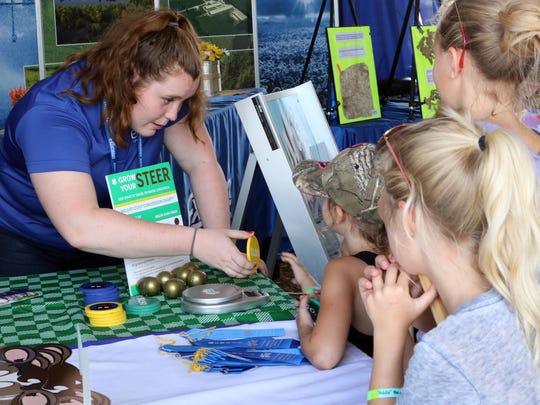 Along with the opening ceremonies, another touching event took place on the Monday before the show when a 5-year-old leukemia survivor got to ride his favorite kind of tractors, John Deere. Isaac Schneider rode John Deere's largest tractor as part of the first Wisconsin-based Leukemia and Lymphoma Society "Random Act of Light" event.

Executive Committee chair Amber Hewett and host farm owners Randy and Renee Ebert were satisfied with how the show went, even after downpours dumped inches of rain on the area the morning of the second day.

The show still opened on time due to the pre-planning and quick decision making from the grounds committee and volunteers, who worked three vacuum tanks to soak up water and spread wood chips to ensure visitors had dry roads to walk on.

The Eberts poured themselves into the event the past three years, giving it everything they had to prepare for the show.

A show of this magnitude doesn't happen without the help of many dedicated people. The number of volunteers working the event set a record, with nearly 1,900 volunteers from Kewaunee County and surrounding areas pitching in, working on 18 committees and subcommittees over the three days to make the show a success.

Other noteworthy tidbits from the show include selling out - before the show opened - of 1,000 Kewaunee County Farm Technology Days commemorative Gehl 800 Forage Harvester toy. The last time the commemorative toy sold out was 2012, when Outagamie County hosted the event.

Tram rides to tour Ebert Enterprises farm were enjoyed by over 50 percent of attendees. Nearly 1,500 tram rides were provided for field demonstrations, which only ran for half of the show due to weather conditions.

Children under the age of 12 were admitted for free, but the Youth Tent recorded over 1,700 youth passports turned in from those who took advantage of all the fun kids activities.

The Heritage lot was set up on eight acres, a record-setting amount of space, with over 150 antique tractors and equipment, along with demonstrations of wood stove cooking, cordwood sawing and building and blacksmithing. Guests at Farm Technology Days at Ebert Enterprises in Algoma watch a field demonstration of choppers on July 12. Field demonstrations were cut short during the event because of weather.  (Photo: Carol Spaeth-Bauer/Wisconsin State Farmer)

The three main promotional videos for the show reached more than 567,000 people on Facebook and views are still being added up.

For the first time in show history, two world-renowned and highly talented equine clinicians, Chris Cox and Dan James, performed and taught attendees about horsemanship each day of the show.

While many aspects point to the success of the show, numbers tell the success more than anything.

A fundraising goal of $500,000 for the show was exceeded from in-kind donations alone, due to the overwhelming support of local businesses and families. With final numbers still pending, the show is expected to exceed the net profit goals of the executive committee.

"Through the three years of planning and executing the show, it is abundantly clear that everything does truly grow better here in Kewaunee County, most importantly, our relationships," said Hewett.