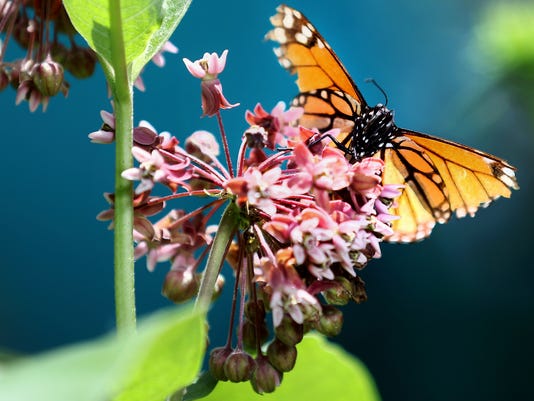 In this July 6, 2017, photo a Monarch perches on a flower at the Butterfly House at Beaver Creek Reserve in Fall Creek, Wis.(Photo: Marisa Wojcik, AP)

FALL CREEK - With both hands gripping his butterfly net, Jim Schwiebert peered into the foliage tracing a paved pathway just outside the Butterfly House at Beaver Creek Reserve.

"Here we go; come on out," Schwiebert said, trying to coax a large red-spotted purple butterfly whose black frame occasionally eluded his view.

Fluttering beyond his reach, the red-spotted purple reappeared on the periphery of one of the outdoor Nature Nooks, catching the attention of a nearby family who alerted Schwiebert, the Leader-Telegram reported.

He jogged over and eyed the butterfly's movements before casting the net with a quick flick of his wrist.

"You got it?" Rebecca Franklin, 9, of Altoona asked excitedly.

"Of course! I'm a professional," Schwiebert said with a smile as he took the net and his prized catch to the Butterfly House.

The red-spotted purple is one of about 18 species residing in the Butterfly House, which opened to the public last week.

"(That) is really very good for this time of the year, for early in the year like this," said Schwiebert, a naturalist at Beaver Creek and curator of the Butterfly House.

Schwiebert said it's hard to say how many butterflies are in the house because the number is constantly changing. But it's clear visitors appreciate the close-up opportunities. 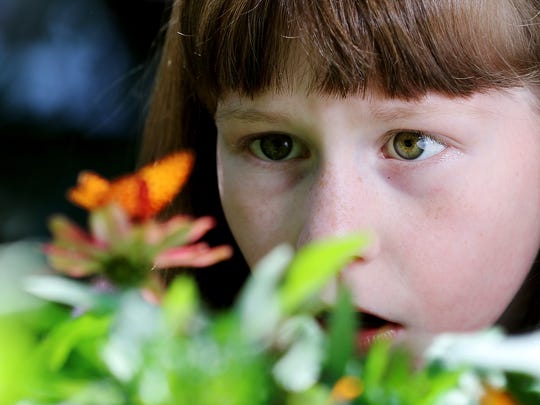 In this July 6, 2017, photo, Rebecca Franklin, 9, takes a close look at one of the butterflies at the Butterfly House at Beaver Creek Reserve in Fall Creek, Wis. (Photo: Marisa Wojcik, AP)

"I think it's pretty cool," Zane McHugh, 11,  said of the Butterfly House. "You don't get to see them a lot (in the wild) because sometimes they're too fast and you don't get a chance to look at them."

Schwiebert explained while there are about 125 species that call Wisconsin home, they don't all fly at the same time, making it impossible for the house to showcase all at once.

That's also because the house specializes in native butterflies, something Schwiebert said is a unique offering of Beaver Creek.

Butterflies won't fly until they can warm up their wing muscles to about 80 degrees, Schwiebert said, meaning the best time to visit the house is when temperatures are high.

"Don't come on a cold, rainy day because you'll be disappointed," he said. They hang upside-down, especially under a plant's leaves, to shed the water.

But the chance of a butterfly landing on a visitor's finger isn't likely, unless it's one of the house's friendlier red admirals, which are attracted to the salt on fingers. 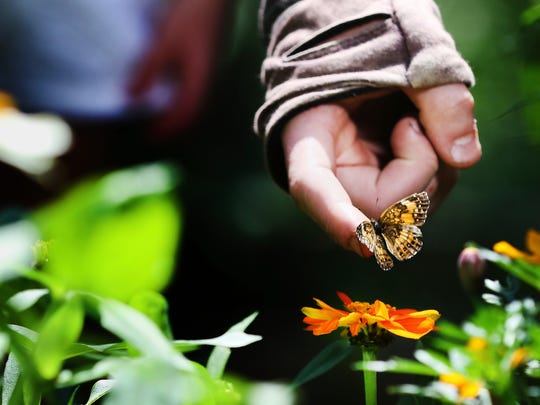 In this July 6, 2017, photo a silvery checkerspot butterfly crawls onto the finger of a visitor to the Butterfly House at Beaver Creek Reserve in Fall Creek, Wis. (Photo: Marisa Wojcik, AP)

Schwiebert cautioned that visitors to the Butterfly House shouldn't wear insect repellent because its chemicals can harm or kill the butterflies. The house's net exterior does its job of keeping bugs and butterfly prey at bay.

The average life span of a butterfly is about two weeks, though it varies based on species. Monarchs only live for a month after mating, Schwiebert explained.

The first and second generations of monarchs mate throughout the summer, and the third generation that hatches in August makes its way to Mexico for winter.

Because it's sexually immature, it can live seven months before mating and spreading out across the southern region. The third generation lays its eggs on blooming milkweed before dying.

Butterflies will only lay their eggs on host plants. For example, monarchs will only lay eggs on milkweed plants. Tasting with her feet, the female will seek out the healthiest plants on which to lay her egg.

Then she leaves, and the egg is on its own.

Schwiebert pointed to a female on a plant who dropped her abdomen and told a gathering crowd to watch for the egg left behind on the leaf.

"Do you see it, Zane? The white dot?" Tamra McHugh asked of her nephew.

Eggs are laid generally on the upper side of the leaf, meaning they're visible to those who know what they're looking for.

In addition to the Butterfly House, Beaver Creek's butterfly lab is where eggs collected from the wild are taken and cared for until they hatch from their chrysalises (not cocoons - that's what moths emerge from) and are ready for introduction to the house.

Eggs collected and brought into the lab have a 98 percent chance of survival. In the wild the percentage averages between 2 and 4 percent.

Monarchs need all the help they can get, Schwiebert said, because about a third of the total summer breeding acreage of about 900,000 square miles has been lost, in part because of the widespread use of herbicide and natural disasters.

For their part, Beaver Creek releases females from the lab into the wild to help the population.

"We want them to be able to mate, lay eggs and bolster the population," he said.

The easiest way for butterfly enthusiasts to set up their own butterfly paradise is to introduce healthy host plants, such as milkweed for monarchs.

"We want to encourage people to not only appreciate butterflies but help raise them," Schwiebert said.