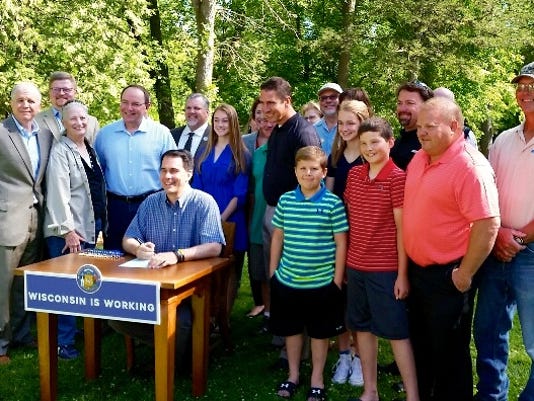 STAR PRAIRIE – When Gov. Scott Walker recently traveled to northwest Wisconsin to sign AB 160 (now Act 21) into law, it marked the culmination of more than two years of hard work by members of the Wisconsin Aquaculture Association (WAA) and state lawmakers.

“This is a historically significant law for the aquaculture industry in Wisconsin as it addresses numerous regulatory burdens that the industry has been struggling with for decades,” said WAA president Peter Fristch, “It also helps to put fish farming on a more level playing field by defining it across statutes as agriculture.”

Fritsch, who’s been a part of the state’s aquaculture industry for 20 years, is also president of Rushing Water Fisheries, Ltd. Rushing Waters lies on 80 acres at the edge of the southern Kettle Moraine State Forest outside of Palmyra, which offers fee fishing for trout, and has a fully stocked seafood shop.

He said the industry has not been able to grow to meet the increasing demand for its products due primarily to burdensome regulations.

However, Fritsch stressed that the state’s 2,600-plus fish farmers support fair and reasonable regulations. “We need regulations, we want clean water, we depend on clean water every day of the week. We weren’t asking for reduced regulations, we were just asking to be able to use a natural resource in an environmentally sound way.”

Fritsch emphasized the importance of the simple change in language to add aquaculture to the definition of agriculture, which the federal government and almost every other state had already done.

“Just because you’re part agriculture in the state doesn’t mean you to get to do whatever you want,” he said. “It just gave us some abilities that, quite frankly, the average person assumed we could do as fish farmers.”

One problem many fish farmers faced was due to the location of ponds within 500 feet of a navigable waterway.

“If a muskrat burrows through one of my ponds, and all of sudden two ponds are connecting, but because I’m within 500 feet of a navigable waterway, I couldn’t go out and fix that pond the next morning because I had to wait for a DNR permit,” said Fritsch. “Sometimes those permits would come through in a couple of days, which would still not help our problem, but in the past we’ve had instances where permits have taken from three to 10 years.

“By getting aquaculture added to the definition of agriculture, this legislation really gives the farmer the right to maintain and repair existing ponds, without having to wait for that permit, and that is huge for our industry,” Fritsch stressed.

The bill, which took two sessions to pass in the Legislature, saw opposition from environmental groups concerned it could lead to water contamination.

"By aligning state water quality standards with federal law, we will ensure that Wisconsin fish farmers are not at a competitive disadvantage to neighboring states," said Felzkowski.

Gov. Walker also credited the three legislators for working with various other conservation groups and the DNR to shore up support for the bill "to get to a point where you still have reasonable regulations but they're not such a burden on the aquaculture community.”

Fritsch sees the new law as a catalyst for potential growth and expansion in the state’s aquaculture industry.

“In past years, we’ve seen some smaller farms just simply go out of business because they literally couldn’t fix their ponds until the governor signed this bill,” he said.

Fritsch is hopeful that some of those who left the industry might return now that the new law is in effect.

“The permitting process and the regulations haven’t really changed, so there are still some pretty big hoops to go through to get started in aquaculture,” he said. “However, I believe there are some farms that might start up again. We would welcome them and hope they come back.”

He sees potential industry expansion also coming from current dairy and crop farms looking to diversify and utilizing some of their water resources that before weren’t really a viable option if they were within 500 feet of a navigable waterway.

“They could have an additional revenue stream by providing healthy food for one or two nearby restaurants, operating a small fishing park or stocking neighbors’ ponds; it all adds up,” he said.

Summing up the effect of the new law, Fritsch said, “This will help the members of our industry remain in business, and hopefully, we’ll see some growth. Some environmental groups thought this would open the flood gates for huge aqua farms from China, but nothing could be further from the truth. We want small- to-mid-sized businesses doing the right thing in a rural environment with great water.”