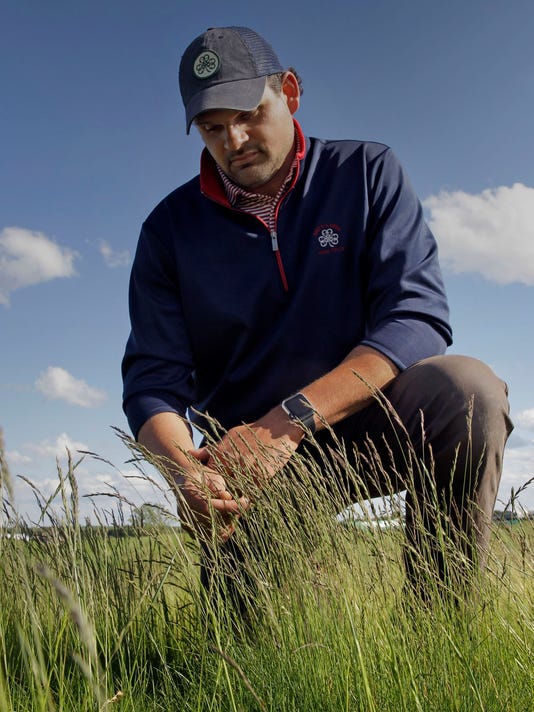 TOWN OF ERIN - Don Heesen calls the fine fescue at Erin Hills the course's signature element, and he’ll argue his opinion with anyone, anytime, anywhere.

“Everybody else has got regular rough,” the 63-year-old former Erin Hills mechanic said in a phone conversation this week. “This fescue is its own breed. It looks like a wheat field just blowing in the breeze.”

Zach Reineking, Erin Hills' course superintendent since 2006, can attest. Like Heesen, he, too, is proud of the way the fescue looks. By the end of next week's U.S. Open, he hopes he'll be proud of the way it plays.

But regardless, nothing compares to the pride he takes in the connection the plant has fostered, one with the Amish community located near Cambria — the Kingston community, as locals call it.

Each fall, the course rids its bales of fescue to create space and to assist the Amish community, who don't use electronics and grow their own produce and shy away from publicity. The fescue is inexpensive feeding material for their horses and cattle, and in return, the community builds furniture for the course.

Talking about the accord made Reineking smile this past Monday.

“They’re so great,” Reineking said of the Amish. “They’re very humble, so family-oriented and possibly the hardest-working people that I’ve ever met.”

Heesen cultivated that first meeting, which was a result of hard work and a touch of luck, he said.

Back in 2013, just two years after the men's U.S. Amateur Championship was staged at the course, Reineking knew it was time to cut the 18-inch fescue for both playability and aesthetic reasons.

Mowing was the obvious starting point, but Reineking’s crew, which included Heesen, waffled with what to do with the mowed fescue because they knew it would lie underneath the grass and ruin hitting areas.

Raking then became the answer. But to where? And then what?

“We talked about this idea — could we bale these areas?” Reineking recalled. “Could we mow them and rake them and then actually bale them up?”

Reineking, Heesen and others explored their options, beginning with a visit to a local farm. There, the crew observed the hay-baling process, which gave them the confidence they needed.

The crew was “very naive" in the 2013 baling attempt, Reineking said, pointing to the 145 acres of fescue and their expectations of 500 or 600 bales.

Initially, they placed them off to the back corner of the property, but then they wondered.

What do we do each year as the bales continue to stockpile?

Erin Hills exchanges fescue from the course to the Amish for furniture. (Photo: Courtesy of Don Heesen)

The following year, as the baling process took shape again, Heesen thought of a conversation he'd had many months prior.

Navigating the winding roads near County Highway H that day in search of an Amish furniture store to purchase hand-made drawers, a mirror, nightstands and a headboard, Heesen came upon the Kingston community and a particular owner (who requested his name be withheld from this story due to privacy concerns and the aforementioned disinterest in publicity).

The two got to talking after Heesen placed his order, and the man voiced the community’s continuous need for bales of hay to feed cattle.

After the fescue was baled in 2014, Heesen put two-and-two together and saw the perfect opportunity. He thought the bales could assist both parties, and he was right.

In time, the Amish man rented a truck and trailer from a neighbor and made around 10 hour-long trips to Erin Hills and back to haul the bales, the man said. It wasn't easy, but the trips fostered a sense of family, which is a cornerstone of Amish culture.

“Originally we said, ‘you know, it’d be nice to get paid for this,’ ” Reineking said, so Erin Hills proposed a per-bale price. “They offered back up, like, ‘is there anything we could do for you guys?’ ”

“It just evolved from there,” Reineking said.

As fall rolls around each year and the fescue is mowed, raked and bailed, Reineking and crew jot down a list of things they need. Some years, Erin Hills asks for furniture for cottages such as nightstands and dining room tables. Others, more garbage cans.

Each time, the community delivers.

The Amish man said it's gratifying to make the furniture for the course, as is every job that involves making items for people. He also doesn't care for golf, much less the 117th playing of America's championship, although he is aware of the tournament and the cameras that will be cast upon it.

More specifically, lenses and eyes will be angled on the course that houses products the man has made, as well as the plant that will look like a wheat field just blowing in the breeze.

"It's become aesthetically appealing and it’s more playable," Reineking said, "so I couldn't be more pleased from that standpoint.

"And to know that we’re able to provide something to this community and that there’s some payback on the back end, it’s just become this great, symbiotic relationship.” 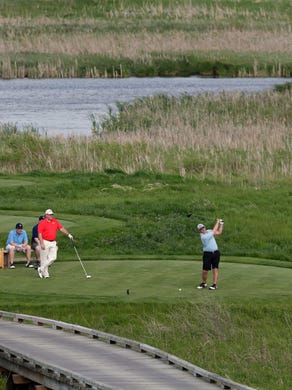 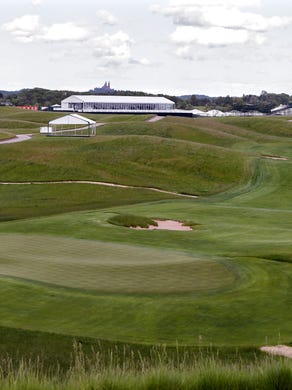 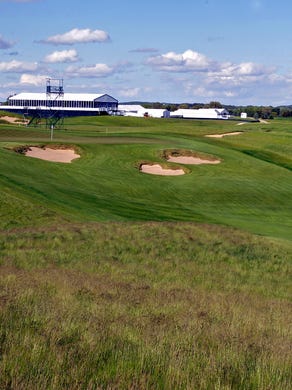 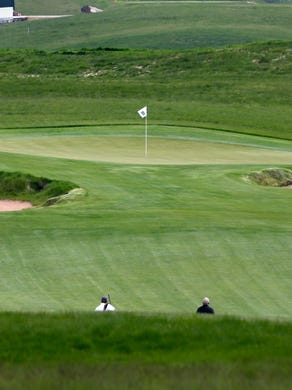 Hole 12 hole twelve. The tee shot must reach a plateau to give the player a reasonable shot to the green. Golfers try to reach the plateau for a view and shot at the green during the U.S. Open media day at Erin Hills, Wednesday, May 17, 2017. The U.S. Open will be held at Erin Hills the week of June 12-18. Milwaukee Journal Sentinel photo by Rick Wood/RWOOD@JOURNALSENTINEL.COM ORG XMIT: 20092350A Erin Hills website says No. 12 PAR 4 "With its wild topography and partially hidden green, the 12th hole showcases the minimalist approach the architects took to build Erin Hills. The tee shot must reach the plateau to afford the player a reasonable approach to the green set in a hollow. With a rare wind from the east or for the long players, the tee shot that flirts with the right side can go down the hill and leave just a pitch." Black 464 Blue 434 Green 388 White 388 Gold Rick Wood, Milwaukee Journal Sentinel
Fullscreen 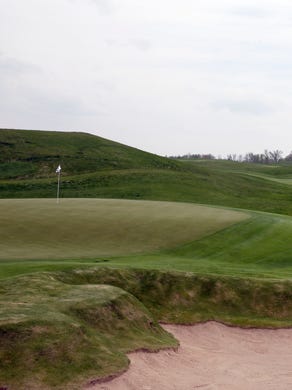 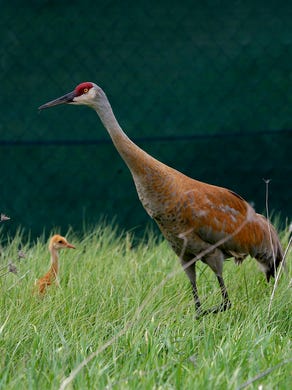